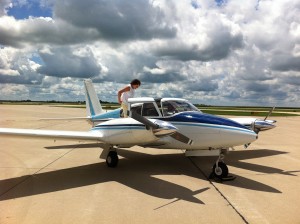 My bidding worked out and I’m off on the 21st to 26th of July – during the week of Oshkosh. We didn’t know if we’d be able to make it due to family obligations and work, but we both wanted to try.  We still know we might not get there, but it looks good and we are going to try.

In 2013 I asked Bev is she’d like to give it a shot and go out there with me to camp out. I was incredibly busy at work, and Bev was busy with other things as well. We took about a week and a half off, and the plan was to go out to Oshkosh and camp out for a few nights. We’d see how we liked it, and then fly home to the beach to spend the rest of our time off.

We stayed with friends of ours in Champaign, Illinois – Jeff and Lori on our way out. Jeff and his son were going out in their Archer along with us. We did not go as a flight of two, but Jeff departed shortly after me.  The trip out there included some low clouds and precluded the VFR procedure for us, but we both did get into Whitmann at different times later that day. 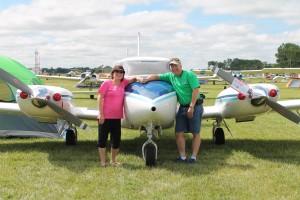 Bev and I were given prime real estate to use – right along the runway south of show center. Our PA30 is considered a vintage aircraft, so we really lucked out. With the camp set up, and with us all checked in, we realized it was getting cool with the overcast skies. Since I told Bev it was always exceedingly hot, we had to go find sweatshirts for the two of us. 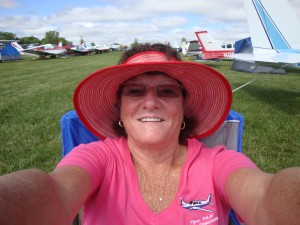 The camping turned out to be a clean and descent experience. Showers for the girls were clean and had no waiting lines. Longer waits for the men, but no real problem for this early riser.  We spent quite a bit of time walking around; watching airplanes come and go; and answer questions around our Twin Comanche.  Bev and I made quite a number of new friends out there, and really had a good time. 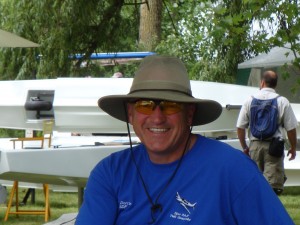 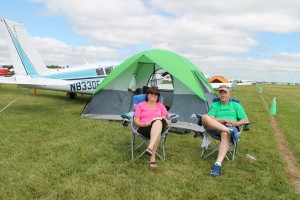 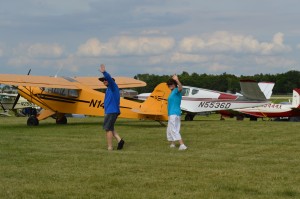 One of our days were spent going out to the seaplane base. I had just gotten a seaplane rating earlier that year, so I wanted to see what was going on. It was a beautiful area and we enjoyed spending the day there, including a trip to the EAA museum.

Now we just have to remember what to bring that makes the most sense based on our previous experience, and head on out.  We’ll bring warm cloths; some of our own beverages; a solar charger; and maybe even something to cook with.

The really nice thing about having a twin comanche is that if we get bored; overly rained on; or just antsy for home; we file outbound and can be home non-stop in about four hours.

I have so much fun with Beverly that no matter where we go; how we get there; or how long we stay; we are going to have a good time.

To all my friends I know are going – we are looking forward to seeing you out there.