I am realizing how much I’m going to enjoy having a large and nicely equipped hangar right near my home and work. Having a nicely equipped airplane inside that hangar is an indescribable bonus!

Mystery Vibration: You remember that vibration I mentioned earlier. It is still there and comes and goes. I had been kicking myself after we found a bad cylinder, assuming that the vibration I’d felt before was a tell-tale and obvious clue. Now that there the cylinder has been replaced – that obviously wasn’t the cause and I really didn’t miss anything there. The vibration isn’t all that bad, just annoying when I have been hyper-vigilant for any lingering issues. I want it resolved and will keep pressing until I figure it out.

The monitoring we are doing on all systems should detect future cylinder issues. Compression and oil filter checks at 15 hours (due now) and again at 50 hours from return to service should catch another cylinder issue if that arises. Both prop overhauls have been done recently as well, so the only thing I can think of is motor mounts.  By the time I get done thinking about it, the issue will probably just disappear.

Update: I spoke with Matt about the vibration over the last few days and he suggested ignition wires might be the cause. I asked him to order new ones for both sides, but the lead time is a month out for those parts. I’ll talk with the A&P that will be doing the work going forward, and have him get the parts on hand before the next oil change in March. So are that’ll mean left mixture cable and two sets of ignition wires.

Cross Country Flight: The weather today is severe clear to the south, with ceilings locally around 5000′ going up to 8000′ to the south. It’s winter, so the air is cold and the wind and bumps are for real. I arrived at the airport this morning and found the ramp to be comfortable when the wind died down or was blocked. Temperature was in the mid 30’s outside, but the hangar felt as cold as a meat locker.

I pre-flighted the airplane with the hangar door closed and saw the right engine was 1/2 quart low on 100W mineral oil. That engine has the new cylinder, and 1/2 quart after 11 hours operation isn’t bad at all. I grabbed a very cold quart of oil and added that before I opened the hangar door. What I should have done was taken a warm quart out of my car, which was in a relatively warm garage all night. No matter – I got it in there and buttoned up the airplane.

The PowerTow took 3 pulls to start in this cold, but once running did the job like it was still new. I worry that the thing only runs for minutes at a time, but can’t do much about that. With my camera installed and the door closed, I turned on the master switch and noted that the engine temps didn’t show as strong an indication as the last flight. It had been in the low 20’s overnight. Both engines fired right up and gave me a normal pressure indication readily. The pre-heaters are doing their job, and the cabin is toasty. Why did I wait so long to do this?

YouTube: I have several new YouTube videos like this one for test flight #5. Search for AirDorrin and you’ll find other ones. I’m working now to tie both of these resources more closely together. I’m learning to produce more useful videos and keep only the processed product; not the mountains of raw footage. Keeping all these videos will fill disk space at alarming rates.

The autopilot held altitude precisely, and tracked laterally with a slight wing wobble. I’m hopeful, at this point, that cleaning the contacts to the head unit will improve the performance, but that remains to be seen.

The flight down to Duplin County airport (KDPL) in North Carolina will get me over that 15 hour mark, and also give me a chance to build my confidence in the airplanes reliability. It was clear skies all the way, but I filed IFR to refresh my single pilot skills in the system for a bit. I suffered a 60 mph headwind for much of the way southwest, and the bumps were mostly light to moderate.

I requested and was cleared for the GPS 23 from JOSCH and set up the autopilot to capture the glideslope. That didn’t work for me, so I disconnected the autopilot and hand flew the approach.  Once I got home, I read that I needed to use loc/NORM mode 20 seconds before intercepting the glideslope from below to make this work. I thought I was doing something wrong. Still shaking off the cobwebs. 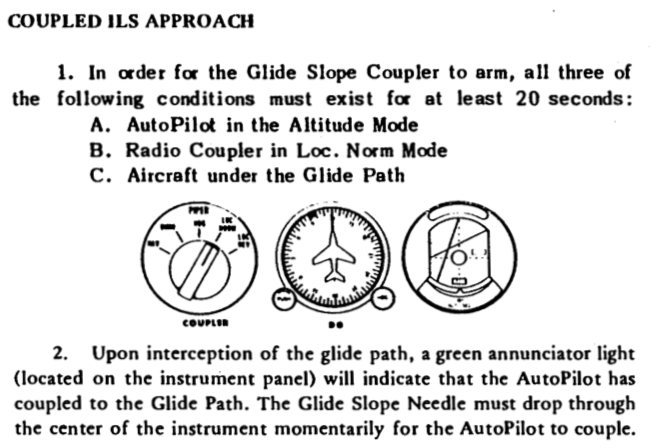 Fuel was $4.53/gal at KDPL so I tankered full tanks home. The line guy came out to talk with me, and pointed out a few loose screws in the tips. I checked them all, and found many that were relatively loose. Took a few minutes to tighten all of them on both sides before mounting up.

With my WAWA lunch in the right seat and my coffee at the ready, I launched on rwy 23 for the return flight. Seymour Johnson control initiated my IFR plan and cleared me direct Josch. Groundspeed kicked up to around 185 kts or higher.

Made it home in good time, enjoying the outstanding view from 7000′

Engine Starting: I feel like I’m getting better at starting these fuel injected engines.

If they are COLD: Mixture Rich; Prime; Leave the mixture rich and start it.

If they are HOT: , as you would experience on a quick-turn. Mixture Rich; Prime to clear vapors that may have formed; Mixture cut-off; Throttle full up; start and increase mixture while you reduce power.

If they are FLOODED: Mixture Rich; DO NOT Prime; Mixture cut-off; Throttle full up; start and increase mixture while you reduce power. You might have to use this approach too, If they WERE COLD, and you had to shut them down because you were a dumb ass and forgot to remove the nose chocks.