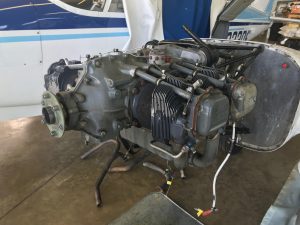 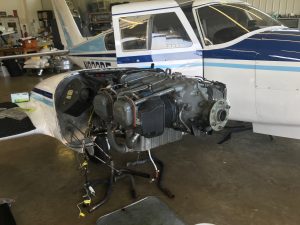 N833DF is in the midst of having its engines taken off today. The crates are due in anytime, and they’ll be off to Penn Yan. Props are on the way to East Coast Propellers as we speak, and the exhaust and mounts will be next.

The first question that popped up is my fuel and oil hoses. Matt built new ones when the fuselage work began 2 years ago, and they only have 100 hours on them. Paul want to replace them already, so we’ll see what the cost for that looks like. I get tired of replacing things just because a new A&P does things differently, so we’ll have that discussion when I get home.

I really don’t want to be here though. Not that I don’t know that this is a wonderful opportunity FlightSafety has afforded me. It’s just that I’m old, I love my wife, and I want to be home. This training would be so much easier done from home.

Alas – I knew what I signed up for, and I’m committed to getting it done. We are coming into the 6th day of training today. I typically arrive in the classroom around 5:30 to fire up the DTS Desktop Avionics simulator. Class starts at 8:00, but I’m awake anyway. I have my coffee here while I facetime Bev before people get here. I’ll go back to my room and study until around 9, and have a nasty hotel dinner if it’s Monday through Wednesday. Otherwise I’ll order out and eat while I work. Laundry night tonight, so I have no idea what dinner will look like. \

I didn’t get luck with my assigned sim partner. He is a quiet guy that would rather work on his own. I’ve tried to establish a rapport with him, but several invites to work on checklists and flows in the larger avionics simulator didn’t get any traction. I found him doing them on his own, and resigned myself to doing the same thing. No harm, no foul, but we’ll be doing the sim sessions together and it would make sense to work together.

We both tried to establish a rapport once more a few nights ago by going out to dinner. The conversation was pretty quiet, so we went our separate ways and I won’t do that again. I already know he won’t be on my check-ride. I would really rather not have him for my SIMs either, but I have noon sims at this point and don’t want to mess with that. I wake up at 4am regardless, so starting a sim at 8pm is really not an option for me. This isn’t USAir and I will push back on that. Send me home if you can’t do any better.

All things considered, I’d rather be at Hollywood Beach for the annual gathering of my friends today. Beverly will be there without me, so at least I’ll get to say hi indirectly. Today it’s Ice & Rain; Oxygen; Waste Water; CRM and the last Avionics module instead. The written test is Tuesday and Sims start Wednesday. Earning my way home, one day at a time.

As for the training, the systems stuff is easier for me, since they look like improved versions of what has been in the two jets I know intimately (Westwind and Astra). The Proline PlaneView Avionics is a technological leap though, and I have the farthest to go in the class. Several of these guys are already flying the airplane, and all but one is familiar with similar avionics suites. I’ve been flying yesterdays technology into tomorrow, so I have a very long way to go in order to be smooth.

I am the only FlightSafety guy in the class, which is the smallest G280 class in awhile at 12 people. They had an impromptu class lunch that I opted out of yesterday. After they all got back though, one client who will be coming to Wilmington in the future asked me to join him in the larger avionics simulator after class. He was enthusiastic and so was I. What a relief to have someone that wanted to work the flows and practice the procedures as much as i did. Very cool.

We worked the GFS last night and agreed to do that again after class today. I plan to come in for several hours on my only day off tomorrow as well, to nail everything down as best as I can.

The most difficult part of this training is repeatedly going from my hotel room to this classroom and back again. Everyday. Then listening and studying a firehose of information for 8 hours each day – everyday.

I want to be home, but I’m here for a reason.