As you know, I’ve been tracking an issue with the left engine CHT #3 reading. You can get a sense for what it’s doing looking at the graph to the left that spans over an hour. Notice the two blips around 22 minutes into the flight that suddenly rise maybe 50 degrees over where they were. The sudden rise is a spike that lasts only 1 reading. Readings at the time of the flight were set to occur every 6 seconds.

I never notice this has happened until I see an alarm around 37 or so minutes into the flight.

You can see where the CHT #3 reading spiked over the bright red line that is set to Lycoming’s limit of 450 degrees. Those readings persisted for only two or three six second samplings, and then dropped right back to normal. They stayed high only long enough to startle me, and then settled right back down to normal readings. I was able to observe the spastic fluctuations that continued to occur for the next few minutes (you can see them approaching alarm levels again at 42+ minutes), although I lost 200′ paying too much attention to them.

This graph looks to me like a loose connection, so I shortened the flight until I was able to look for those. My A&P suggested I remove a panel and check the connections. I’d come to the same conclusion and went over to the hanger yesterday morning (5/11/2020).

Taking a look inside: Sometimes it makes sense for a non-mechanic owner to take a look. I’ve been able to do more with my airplane in that regard, but this time I had no idea what to look for. 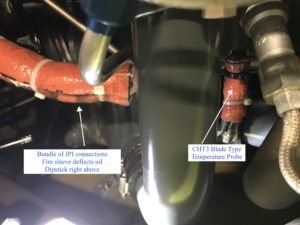 Click on the picture at left and you’ll see a good shot of what I was facing. No way I’m pulling things apart to look more closely. There was nothing amiss I could detect, so I called Paul. I did take a moment to reflect on how clean everything looked and enjoy the fact that I owned this thing.

aul and I had a nice lunch while the engine cooled off, and he opened up the bundle of connections at left and removed the fire sleeve on the blade probe itself to inspect connections.

I was surprised that each individual JPI wire has the purpose printed right on it. CHT #3 was clearly printed on the lead wire, once the bundle was unwrapped. This is quality material.

Connections within the sleeve verified tight and appropriate. 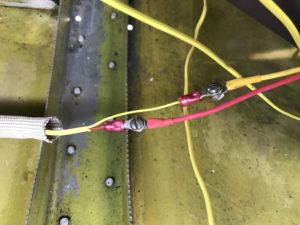 Connections on the probe itself are also tight and appropriate. 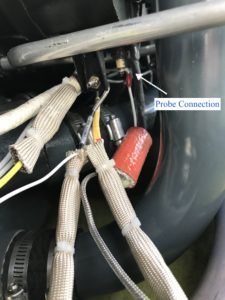 The only other connections are on the instrument side, and my understanding is that is a production cannon plug. All connections appear good, so we didn’t accomplish anything on the face of it. I definitely did – mind you. This was a necessary step before I talk directly to JPI, assuming the issue continues.

I did learn that some zip ties are able to withstand more heat than others. That was a new concept to me. I also learned more about washer type probes versus blade type probes, and that the engine cylinders already have a plug in the cylinder to accommodate the later. Thanks Gary M for reading my last post and calling me to share what you know. It’s all great stuff and it helps when we work together. Thank you! 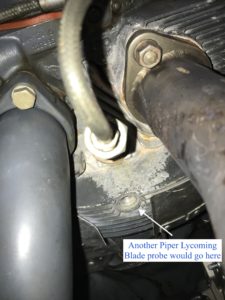 The picture at left is not from my airplane, but you can see the plug on the cylinder where the blade would normally go. Getting my eyes on this stuff helps.

There were no obvious connection issues found. Sometimes there are ghosts and gremlins in machines, and just touching them or swearing at them chases them away. Maybe that happened in this case. In any event, we put it all back together as the wind cranked up even more for the ride home.

I made it home in time to hangar the airplane, but not early enough to do it properly. I had to zoom off to my dental appointment and return afterward to finish putting N833DF away.

I’m looking forward to flying again. That might be today, but I’m not sure I know how to fly in less than 40 knot winds. We’ll see. The idea is to put 2 or 3 hours on the engines today, and try to get the CHT issue to repeat itself. When that happens, I’ll look for a warranty replacement of the probe itself.

I am so lucky to have finished this project before all this virus disruption happened. Now I sit here with a clear way to avoid the airlines for all but international travel. It’s been a long hard road, but I’m now poised to take advantage of the results.

Bev and I are planning Florida in July so we can vacation on the surface of the sun, and several other trips with our friends for the balance of the year.