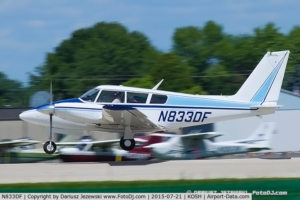 This past Saturday was one really nice day for me. The weather was very temperate and there were only a few clouds hanging out around 3000′.  I’m still flying conservatively by avoiding flying IFR while I’m analyzing and pampering these new engines.

I had a nice breakfast with Beverly, as we watched the increasing pleasure boat traffic on the C&D canal. After that was all done, I pulled out the Harley, loaded up the cameras and my flight bag, and headed off to the airport.

Todays mission would be to fly to Atlantic City, perform two practice approaches, and then head southwest to Salisbury, Maryland. There I’d do a few more approaches before heading back to Wilmington, Delaware.

My engines are still being broken in. Actually, I think the right side is completely broken in while the left engine still has cylinder #4 making me wonder if its break in has been completed or not. Cylinder #4 continues to run 30 degrees hotter than everyone else, so I’m limiting power and maximizing airflow to control to that cylinder.

The JPI system is having an issue I’ve spoken about before. CHT probe #3 is definitely broken in some way. The CHT for that cylinder looks normal most of the time, but has momentary excursions from -90 deg F up to +600 deg F that’ll get your heart going. I have been given advice to look for a bad ground, but that is doubtful given the behavior of the system as a whole. I may be wrong here.

I spoke with JPI just now, since they didn’t respond to my email. They are confident that it is an installation issue, and will most likely be found at one of the clamps securing the wires. They want me to look for a crushed connection shorting the red and yellow wires together and involving this lead. An alternative would be to swap the probes to rule out a bad probe, though they said that probes either work 100% or not at all.

I’ll need to fly off 10 more hours to get the oil changed, swap the two probes (#3 and #4), and see what that gets me. These issues are solvable. By swapping those two probes, I’ll also be able to ensure that the hot cylinder #4 is actually hot and not a probe issue. I know, I know – the odds of finding an issue that fixes everything at once like this is nil. Worth a shot though.

Of course – if the probe I’m moving to #4 is actually bad – I’ll have a bad probe on a hot cylinder whose data I need. Let me think about that some more.

Todays Flying: Every now and then the stars line up and it is a wonderful day. I came out today knowing that the issues I’m running down are not threatening problems, and I can start expanding my use of my airplane. Today I’d be doing a few practice approaches, checking the data, and fine tuning my engine management for the next go. I already know I’ll be shallowing my climbs on go-around, to keep that #4 temp down.

I like the video I put together for this one…..  I’m slowly improving my editing skills, I think.

The video link included here was only the first leg. The fun continued and included flying over the canal and my house on the way home. This was a very cool day indeed.