I have a post-maintenance flight ahead of me, returning my Twin Comanche to service after some significant gear work. I am once again making the difficult decision not to start the engines today, given the continued cold temperatures we have been experiencing. I’m waiting for overnight 30’s with high 30’s to 40’s in the daytime to avoid excessive wear on the engine internals.  I just don’t want to invest in pre-heat equipment for the few cold flights I do. Far too many weather cancellations in February as a rule to bother.

To scratch that aviation itch in February, I usually take on a project to distract me.  Last year it was a motorcycle trip for fun, and earning a seaplane rating down in Florida to stay proficient. The seaplane rating was productive and really more exciting than I expected – what a ball.

This year I set up a King Air BE200 initial rating to pass the time (February!) and keep me current. I should be there right now, in Champaign, Illinois, but you may know from previous post that the latest storm cancelled my commercial flight out there. If SouthWest couldn’t make it happen, I certainly couldn’t have.

I might be good to reflect on an encounter I had while owning and flying my last airplane – a single engine Piper Warrior II.  What follows is post I put out there a few years back regarding an encounter with freezing rain.  That event could have ended poorly for me, and is one more reason why I make better weather decisions today.

At the time, I was an instructor with a friend and instrument student over in Atlantic City, and I was flying my Cherokee like most people drive a car.  This was a good day to fly in the rain (actual) for the student, and then go grab my sisters in different towns to bring them to our beach house.

Friday Night: Review the weather for the next day and finalize plans with my sisters for being picked up for a visit to Delaware.

Kate and I had a scheduled IFR training mission for the morning, after which I was to fly to Smoketown (S37) to pick up my sister Susan, and then to Brandywine (N99) to pick up Donna and Joe.

It will be helpful to discuss what my plan for the day was, so that the reader might understand more about the decision making process a pilot undertakes.

Kate’s IFR training mission was to take place first. For this, I flew over to Atlantic City (ACY) to meet with her at MidLantic aviation. We briefed on the days flight plan:

On the ramp and before takeoff, it becomes apparent the ceilings are lowering and wind is picking up. I attempt to file an IFR clearance that I can pick up over Sea isle VOR (SIE), to complete the second half of our mission. This also would give me an organized way home if the weather changed quickly for the worse.

Millville FSS is now closed, so I am not surprised that the level of service has gone down. I can not get through this morning, so we launch into the VFR conditions with ceilings locally around 1500′. Would have been nice to have a preloaded IFR flight plan in the system, but I can get a pop-up or just run south from the advancing front.

We depart south toward SIE, with Kate under the hood. I have my eyes outside, so I instruct Kate to check her ascent at 1,500′ to maintain VFR clearance from the clouds. With Kate flying as we approach SIE, I notify approach control that there will be no VFR airwork for us today, and could we please obtain a clearance for a few introductory MIV VOR-A approaches and one ILS 31 back into ACY.

No Problem! Approach tells us that there are level 1 and 2 cells in the area, and a level 1 directly over Cedar Lake VOR (VCN) at this very moment. Kate has been flying the simulator, and understands the technical aspects of flying the approach. She flies two VOR-A approaches in full instrument conditions with turbulence, and gets a real taste of what its like. Its all about getting as much done ahead of time as you can, and constantly managing your workload.

Flying those two approaches, aside of the turbulence, worked out wonderfully. The front was conveniently positioned over the initial approach fix, final approach fix and the final approach course. Flying the missed approach brought us out into VFR, and afforded Kate a chance to breath a little before heading right back in. The Garmin 396 is doing a great job of showing me where the cells are, and clearly defining the front.

By the time we finished up the second VOR, Atlantic City had changed up its approach in use, so we changed the plan from ILS 31 to the VOR 4 back into ACY. Here again, the weather front was conveniently located to allow Kate to take the foggles off, but still count it as an actual instrument approach not that this mattered to her. Right over the final approach fix we re-enter the clouds and rain, and flew a really nice VOR-4 to end the lesson. Good flight all around.

Kate and I wrapped up our paper work, and I called Susan and deferred her pickup to 1pm. I received a weather update of level 2 and 3 rain cells along my proposed route, and the ceilings are reported around 1000′. I decide to not attempt to get into Smoketown airport (S37), and change my destination to Lancaster at this point. I specifically ask about the freezing level, and it is reported to be 7000′. I chose 4000′ enroute, and get ready to go.

I am flying along in moderate rain now, with the XM radio playing softly in the background, as Atlantic City hands me off to Philly approach. Philly gives me several vectors around traffic, which is moving around on him to adjust for the storm cells and turbulence. I get to ride my entire trip down in the stuff. Temperature around ACY is 47 degrees F.

Westbound, but getting closer to Lancaster, Philly hands me off to Harrisburgh. Harrisburgh approach control gives me a descent to 3000′ and continues vectors for the final approach course for the ILS 08 into Lancaster. Somewhat abeam the runway at 3000′, I am enjoying the challenge, enjoying the tunes,coping with the turbulence, and monitoring the intensity of the rain. I look up to see that the rain has stopped moving on the upper half of the forward windscreen.

You might think your mind might immediately comprehend that the clear water not moving on your windscreen is actually ice. Mine didn’t. Once before, I had a problem with an oil plug that led to oil on the windscreen. in that case, it took several minutes (or so it seems in my memory) to actually understand that the water on the windscreen was oil, and that it was more viscous than water. In this case – I just keep looking at it for (seconds now) until it clicked that it was ICE.

I was at 3000′ when I notified Harrisburg that I was getting iced up, and the controller immediately descended me and turned me closer in for the ILS intercept. I reported ‘clear ice’ on that day, though I now realize it was freezing rain. You could see the rain drops and rough shapes on the windscreen, but the wing leading edges were getting covered with a clear coating. I distinctly remember, now, looking down and seeing where the drops had hit, and flowed back over the wing, freezing as they went. This stuff could kill, so it was worse than I reported.

It was not until late on the next day that I realized how much a part of my team the approach controller was. I would have realized shortly how much trouble I was really heading for, but he was so on top of my flight that he was issuing commands immediately upon hearing about ice.

Cherokee 60Yankee, descend and maintain 2500′, turn right 060 and intercept the localizer inbound. You are cleared for the ILS08 into Lancaster. When able, say temperature. I report temperature at 3000′ to be 32F, and start down in a hurry. Passing through 2700′ on the way to 2500, the worst icing I’ve ever encountered happens. The windows became total covered with this clear – rain drop shaped ice – instantly. I reported continued and worsening ICE accretion, and by now was getting established on the inbound leg. Approach was surprised I was still getting ice, but now I can’t see anything outside at all out front. Temperature doesn’t go up at all, level at 2500′, but the ice is not building on the wings. Its also not melting. Only later do I realize that by descending me and turning me immediately, the approach controller greatly enhanced my safety.

What to do: I am descending down the glideslope with a solid layer of ice on the windscreen. Down through 1200′, I still cant see ahead. I know that I cannot afford to fly back up into the ice, so I weigh the risk of landing with no forward visibility against the risk of going back up into clear icing. I am not nervous at all. I fly the ILS with the needles centered, airspeed on target. Practicing in turbulence with Kate, only an hour before, was a Godsend.

I have the airplane heating system set to easy bake the minute I saw ice. It getting pretty hot in the airplane, and just above 1000′, the entire sheet of ice finally lets go. It is a sight I will never forget. Very high cool factor. The ice sheet went up and over the top of the windscreen, just like an opening eyelash. There, right in front of me, was Lancasters runway 08. Now, how friggin’ cool is that?

I touched down hot as I didn’t know how much ice was still on me, and used the entire runway length.

I don’t often think that I’ve done a good job when I’ve had an encounter such as this, but this time it was different. I flew well and was adequately prepared for the unexpected before I ever left the ground. The one thing I’d do someone differently would be to evaluate the temperature drop across an advancing cold front in winter. The temperature dropped about 15 degrees from ACY to LNS, so I might have been able to predict freezing rain had I been looking for it.

2/17/2014   Update:  I’ve had several ice encounters since this event; one as recently as last fall when my Twin Comanche developed a significant ice Vee while on an actual approach into Salisbury, Md. The PA30 tail is very thin; the amount of ice on the leading edge significant; and the potential for a tail stall was real in my opinion. 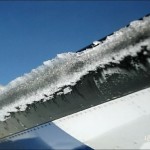 The picture inset gives you an idea of what I saw out my rear window, though this one is a main wing with boots.  I thought about snapping a picture, but then considered how I should fly the airplane out of the ice and forget about the cool picture for now. In this case I completed the approach – and continued under the clouds to Georgetown, where I put the airplane away.

I would say that I was flying safely back in 2008, but that today I have better tools to bring to the fight that widen my safety margins considerably.