Strange title for someone who has been flying IMC for years, I know. I flew N833DF up to Lancaster this morning in a little bit of weather. The forecast for today had been predicting 700′ ceilings and thunderstorms most of the last few days leading up to this morning. When I got up though, Chesapeake City skies were clear with calm winds.

The forecast for Lancaster was reporting 1600′ ceilings, which ended up actually being around 1300′ with tops around 2200′. The thin cloud layers were surprisingly dark, and the turbulence within them was spirited. Occasional moderate made it a challenge to keep the airplane on rails all the way down the ILS, but I kept it within standards all the way down.

Preparation for this trip began days ago by watching the weather. When I realized this short trip would involve IMC, I set my personal minimum in this airplane at 1000′. It’s been 2.5 years since I’ve used this airplane in IMC, and I’d be turning on Pitot Heat and Defrost Heat for the first time in several years. I want to ease back into IMC with this machine.

Last night I fired up my simulator for one complete trip from KILG to KLNS, followed by four different ILS 8 scenarios to minimums. I also did two GPS approaches to cover my bases, until I was comfortable I’d exercised my process. I was ready for 1000′ minimums after that. It amazes me how relevant an 11 year old simulator can be with occasional updates.

My crazy schedule this week is a product of several occurrences. It looks like our Westwind simulator is getting retired. They just can’t keep it going any longer, so my schedule for the week cleared right out. I worked Monday and then only an hour on Thursday.  I took advantage of that time off and knocked out a doctors appointments for my allergy suffering of late, and also managed to renew my FAA Medical. Since the last medical I’d started using low dose Lisinopril, and I was worried about that. Combined with the cancer history and controlled Asthma, I felt it was more difficult to stay under the radar. Turns out I was worried about nothing, and my BP came in just fine.

I also has a laundry list of calls to follow up on that require hand-holding. Delaware Motor Vehicles was one – I’ve been cajoling them to refund the road tax they impose on my airplane and give me a refund. It has been several years since I submitted one, so they needed me to update their paperwork. In short – their process failed and it took 7 calls and 5 people to get it fixed. Still no money, but the calls have been completed.

My Honda CRV intermittent wipers stopped working, and I only just noticed it with all this rain. I tracked that back to having my windshield replaced 6 weeks ago, and that was confirmed during my service call at Honda. Fortunately, Honda covered it under warranty and assumed it was a manufacturing thing. There was silicone grease over the lenses, and once removed and cleaned, the wipers started working again. I’m anal, so I called SafeLite Auto back and reported the issue I’d had. I felt pressure to get this fixed before Bev and I go on a driving vacation next week.

N833DF airplane maintenance had been scheduled since last week for today. The autopilot control head spent a month sitting out in Illinois somewhere, waiting to get serviced. When Lancaster Avionics called to tell me it was ready, FRIDAY was the only day I could possibly get back to Lancaster and wait for the airplane. I really didn’t want to put my friends out and have someone drive me back and forth if I could avoid it. So Friday it would have to be.

I’m working next week on Monday, Tuesday, and Wednesday. Leaving for vacation on Thursday, so it’s either Friday; get someone to drive me twice back and forth so I can leave the airplane on Tuesday; or wait another three weeks to get the work done. I felt pressure to get this fixed before Bev and I go on a driving vacation next week, and I had to take steps to avoid being tempted to flying in too challenging of a condition for the first N833DF IMC flight in awhile.

I set my personal minimums at 1000′, so naturally the Friday forecast has been consistently below that leading up to today. Last night I went to bed expecting 700 overcast in rain, for which I’d have called off the trip. Thunderstorms were supposed to rule the area as well, so it wasn’t looking good. 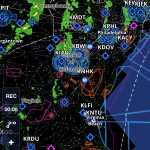 Waking up this morning, however, I was greeted with calm winds and clear skies in Chesapeake City. Surprise!  It turned out that Lancaster would still require an instrument approach, however, but at least the ceilings were 1500′ instead of 700′.  I fired up XM weather and let the ADS-B weather update itself as I got the engines turning.

Taxiing out from my Hangar in the West Tees, I picked up my first instrument approach clearance in this airplane for some time. Oh man this has been a long time coming, and I was glad to get moving again. Watching Ben fly low approaches in the Westwind smoothly reminds me that these are perishable skills that must be practiced. I need to practice in real conditions more often. Flying approaches in my own airplane will help me be that smooth when it’s my turn on the left side in those jets. Owning my own airplane and flying it professionally within it’s limits is just so very cool.

So the ride up here was flown by hand and took about 20 minutes. Wilmington had wind, but was clear of most of the weather. Lancaster had broken overcast 1500, which was more like 1300. Windshear at 2000′ was significant – 40 knots to 15 knots – and the turbulence occasional moderate. The ILS 8 worked great, and I broke out with the nose pointed 20 degrees right of the centerline to track the course. That sheared to 5 degrees over the threshold. I came in a bit hot – 105 over the fence – and could have slowed down a bit earlier in retrospect.

I also could have checked XM weather more closely for storms. I had a good eyeball evaluation going, but there are some building areas out there this morning. Small hail warnings for this area, so the instability will continue and probably worsen.

Now that I’m here, I’ll catch up with my sister for lunch since she lives up here. I’ll plan my trip home around whatever weather shows up, and use a local hotel if the weather gets too gnarly.

N833DF was smooth and powerful today. It is trips like this – even the short ones – that remind me how very worth it this machine is. I can’t wait to try out my autopilot and new flightstream 210.  He who dies with the most toys wins!