This trip has me in White Plains tonight, West Chester County, NY (HPN). Yesterday’s 5 legs included round trips to State College and then Erie from Philly. These were followed by a 2 hour layover before one last leg to New York. Long day.

Heard from my GA buddy Mike to start my day. Mike just earned a kick-ass promotion. Way to go Mike! He was on Concourse E heading somewhere for work, as I was in the crew van inbound. We didn’t get the chance to hook up, but he flies so much I’m sure we will have that chance again. Looking forward to staying engaged in GA flying with folks like Mike, as I get acclimated to flying professionally. This is my roots – my path into this profession.

Departing PHL for our first round trip to State College, I got to hear Darrel and Chris on the radio; fellow FOs in my class. They were in two other Piedmont Dashes heading in other directions at the time. I’m proud of them and glad to be a part of that team. We held our own on the radio…. This is just too cool. 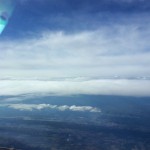 On the way west, we could see that the leaves were changing more noticeably over the mountains. The wind was kicking up all day, and the cloud layers marked a cold front. No serious weather effects yet. The Captain did the landing in gusting conditions and I did well on my own tasks as PM – Pilot Monitoring.

My captain today stopped logging his time years and years ago, as he passed by 20,000 hours. He has been flying over 28 years, and his resume includes the F-104 Star Fighter; Fokker 23 troop transport; and the F-16. I’m almost at 4,000 hours and I’ve read about the Star Fighter and the F-16. I’m happy to be sitting next to him as a required crew member who flies the same aircraft he does. While I will never be as good as I’d like to be – I did make it here.

The leg back to Philly was mine. We negotiated with the tower for runway 26 with a crosswind (200 deg at 11 gusts 19, as I recall). I kept the crab in until the last minute, and then flew it like a Cessna 172 bug smasher. Not perfect but most definitely passable. As usual after a difficult landing – there was a party going on in my brain and I had difficulty with the machine gun ground clearance that came immediately after. Captain supported me seamlessly thought, and I regrouped and did my job.

These captains understand new guys. They are patient and amazingly willing to share everything they know. Can’t say that enough. Respect.

Erie is up next. It is the captain’s leg and we run into IMC in layers. Approach informs of of areas of moderate to extreme precipitation. We don’t see it on the radar, but decide to climb to 20,000′ to possibly top the rain. He anticipates ice and turns the boots on. One of the boots on the left wing doesn’t work, so he diagnoses that issue and I watch. The cabin over-pressurizes and we hear the forward outflow valve open. This is the first I’ve heard or seen this happen, so now I know more what to watch for and listen for. My sinuses feel the change.

There is only moderate rain and a few bumps to be found. We descend into Erie as the Captain raises the cabin base pressure and continues working on the boots. The outflow valve closes and the noise stops as the internal pressure rises. The boots start working as the outside temperature rises. Turns out water in the boots froze before the boots came on – so the lesson relearned (for him) was to turn them on earlier in the climb. All new and accumulating experience for me.

The view outside is stunning. We pop out under the clouds, in moderate rain, looking at two very large radio towers to port and Lake Erie at 12 O’Clock. The landing is flaps 35 and uneventful.

My leg coming back, and I am treated to a crosswind takeoff into an overcast sky with moderate rain. Same weather warning outbound, and the boots are on early and working. We get impact rime ice all the way up. I hand fly to altitude as is my norm now. We talk about winter considerations; icing; and how capable this airplane is.

The landing on 9R now is a more spirited crosswind. I really have to fly this thing. Holding the crab until about 100′, I bring in the rudder and manage the gust with a bit more airspeed. Lots of runway, and I really have the right wing noticeably down to counter drift. Right wheel down; left wheel down; nose wheel down. I realize I can really make this good and bring the props back to disc…. Captain reminds me to let it roll as we are getting off at a later taxiway. Down and good.

Hardest part again is combating the celebration after a challenging landing to taking over as the PM on the ground (FOs always do the same ground roles). I’m working on this and it will come with repetition.

Another amazing day with beautiful views and a continuing education for me.

Fly safe and live your life.