I’ve been carrying around my overcoat unnecessarily for several trips now, but this last trip saw temps in the 30’s and light snow up in New York. Winds were cranking up over 30 knots on the ramp and the coat was warm once I was able to put it on. 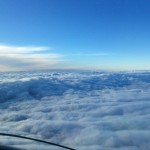 My last trip with another Captain (Tim G) new to me was motivational. This guy was young compared to others, with about 10 years experience. He  is an expert on the aircraft and it’s systems, and flies the machine precisely with no effort. His most exceptional trait is his personality, however. He is an exceptionally nice guy who treats everyone around him with a great deal of genuine respect. My sim partner, Calvin, has the same approach to life. I am working to be more like these guys naturally.

On this trip, we were flying to places like BWI, White Plains, and Ithaca. The flights into Ithaca were the most fun, with a raised DA on their ILS; snow storms and ice at altitude; high winds all along the way. On one of the first approaches we did today had ceilings just at the legal level for the ILS into Ithaca. With the winds we were experiencing, diversion was a possibility.

The very cool part of this particular commercial flight experience is that we had engaging collaborations in flight. Which approach should we perform?; what should our actions be in the event of a missed?; what will our subsequent planning look like?; when and how would we include ATC in the conversation; and finally, how would we configure the airplane? The collaboration was the same regardless of who was flying.

Winds were serious all day. The Captain let me know I didn’t have to fly, or do the take-offs and landings in these conditions if I didn’t want to. He is a short-timer, and I didn’t want to mess him up, but I am ready for all of this and very much feel capable of flying this airplane to it’s limits.

I briefed him that I’d like to do all the flying on my legs and try everything. I truly feel up to it and anticipated no problems. If I’m on the edge of my envelop, I’ll let him know but keep the controls. On the other hand – my feelings will not be hurt if he’d rather fly (I’ll have another opportunity all winter). Finally – I told him what I do it my airplane if someone else is flying and I don’t like what I see.  I say go around, go around, go around. If he said that I’d automatically fly us out and then let him take us in from there. No drama.

The result was that each of the approaches into Ithaca included a discussion with ATC and the two us. We developed a plan and acted on it, landing with no drama each time. In one approach, we even negotiated with  ATC to turn around the airport to have everyone landing with a tailwind. The ceilings were below the revised higher ils mins, so the VOR 14 was better in this case. Awesome.

The Captain did his job by effectively including his crew and the external resources in the planning.  I felt like I contributed fully in the process and was incredibly satisfied, whether or not I was the flying pilot. Very cool.

I have a GA friend I fly with who I feel very much in-tune with in an airplane. When I fly with Mike B, the experience is always positive and I learn or re-learn something important.  This experience was just like aa GA fun flight.

During the quiet times on the ground or flying along above the clouds –  Tim took the time to review with me how to schedule a vacation using my travel benefits; which FILs to be more aware of; how to use our new parent companies websites; and a variety of other things he thought I should know.  He has me motivated to develop a transition plan to Captain; including a plan to get my nose back in the books and take positive actions in my own development.

I do have to say that the last string of Captains I’ve flown with are not dietician’s in anyway.  I will need to develop a stronger will power related to food if I am going to survive.

Note about exciting flight experiences and great Captains. Very positive experiences like this one need to be understood in context when I talk about them. Many Captains I’ve flown with on previous flights have done admirable jobs of collaborating with me, but were not recognized. That is all me. I have to be ready to process effectively what they may have tried to tell me.

This flight was different. On this day – the Captain was on his game and eager to pull me in – only this time I was ready.