It will be easier to write about the intense annual I’m in the middle of when it’s all done. For now, I can add some flavor to what we’ve found thus far. Taking apart something so dear to me is a tough thing to endure.

I guess it was a good thing that the skin cracked about the windshield. The headliner had been glued into the frame and would have been tough to remove as a result. The later had to come out to be able to fully access the pitch trim system, so the windshield would have to come out.  Matt found a crack emanating from a windshield screw around the windshield, and confirmed my suspicion that the screws had been torqued down too tightly at the last re-install.

Skin Crack #1 – top dead center on the windshield.The airplane is 50 years old this year, and the windshield has been in and out of the airframe probably 5 times since I’ve owned it. Stuff happens. Shortcuts cost time and money – mostly mine.

The picture at left shows Matt holding a doubler that he designed to hide underneath the skin. This means my brand new paint is saved, and the smooth lines of the Comanche will be preserved in the windstream.  Other than shiny new non-painted rivets, you won’t even know it’s there. That is craftsmanship.

I should have taken a profile of this doubler as well, since the picture shown makes it look easier to make than it was. The profile shot would have revealed how the effort he had to put into hand-shaping the compound curve required to match the fuselage contour in the affected area. The picture at right is the doubler under the top skin.

The shot below shows the doubler installed with cleco fasteners, with the offending screw hole below it. That is the hole that was leaking after the last windshield reinstallation while flying through moderate rain. The A&P doing that work had siliconed the hole and over-torqued the screw as a solution. This shortcut slowed the leak, but cracked the skin. Water was found behind the windshield after it was removed this last time.

Matt’s repair is now complete and the windshield has been re-installed. The only other complication was the soft aluminum window trim below the windshield. That had suffered some abuse over time, and we tried to find a new one. The cost and condition of replacements were questionable, so Matt had to hand repair and reform the one we had.

Kendall Horst at Lancaster Aero agreed to provide me with touch up paint for the rivets and any new scars, but also suggested I let him do it for me when I was ready. I’ve decided to take his advice, and most likely will fly up in the spring, I’ll have him touch up any rough areas that result from this annual, and return the paint to pristine.

Gas Caps – an easy one. I noticed that my fuel caps were 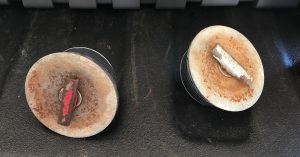 rusting and looking awful. I figured it was poor manufacture or materials on this batch, since I’d not seen this before. It could be due to the airplane being outside at times due to hangar storm damage, but that didn’t sound right. Then it was pointed out to me that paint stripper residue from the repainting process would do that. I ordered new ones and solved that one on my own. 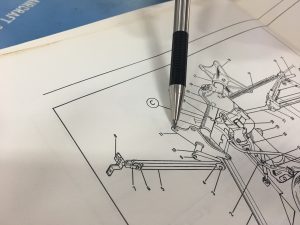 The picture at right shows the bolt you are looking at below. We are working with knowledgeable folks at the International Comanche Society; other knowledgeable resources that know Comanches; and ultimately a designated engineer to design a permanent repair.

I expect this work to be completed in the next few weeks, and I’ll document the repairs.

I’ll be heading back to the hangar on Monday morning, after being holed up at home for two weeks dealing with family medical issues. With everyone back on their feet – it will be good to get going.