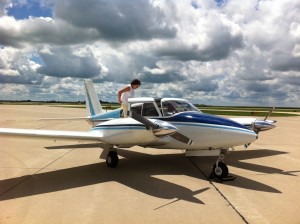 Several of you have noticed that I significantly slowed down my blog writing over the past few months. That certainly is true. I’m just now getting back to putting this post together and anxious to share more of the cool things I’ve been experiencing recently at FlightSafety. I didn’t feel much like sharing any of that until I knew more about the future of my airplane.

I also put the development of my new book on hold. One really needs the correct frame of mind to keep it entertaining and enjoyable, so I decide to wait until things settled down to get back to writing. Since by now I am confident that Matt will keep moving forward and find a way to get the parts he needs to get me airborne again, I’m ready to get back in the game.

Just a bit of review is in order: Back in October, the annual inspection of N833DF began. Matt felt that a number of items on this 50 year old Twin Comanche needed to be addressed. He began by recommending replacement of all fuel and oil lines. I found that the right prop had some play in it, and told him about it. He took that off and we sent it back to the shop that had just overhauled it a year ago. They gave me a break on the charges and sent it back tight and adjusted.

Next, he found a small crack in the skin above the one piece windshield, and removed that to apply a patch that ended up looking very nice. The overhauled pitch trim servo was reinstalled and we found that associated pulleys and cables had been damaged a few years back when the interior was updated and installed. Glue had gotten onto the pitch trim cable pulleys and frozen them in place. The control cables sawed through them, and created the symptoms that led to overhauling the pitch trim servo. The entire interior had to come out for that repair, and the scope of work grew a bit more.

I decided to upgrade the kx-155 radio display that had become unreliable, since it would take 4-8 weeks to complete and I had the time. Might as well complete that work now too.

The really bad news comes along when Matt found small cracks in the rear panel of each main landing gear box. These boxes attach the main gear trunions to the wing, providing a pivot point to stow them in the well. The back wall of each box is where it cracked, and that would have to be addressed. Matt started out not knowing how to really address the issue, so at this point I had no clue where this would lead.

I realized I wouldn’t be flying anytime soon, and that the costs for this expanding effort was going to on the significant side of large. The main landing gear boxes would have been a huge item on their own, but we were adding this onto an already significant list. I was very much depressed about it, and knew that planned trips for the year would be affected. Bummer.

The most difficult part of all of this was not knowing if this could be fixed, nor how to go about getting it done. I was following Matt’s lead, and he is a very busy guy who was just handed an airplane that needed tremendous work. No one to blame – no one to complain about – nothing to do but be patient, write checks against my retirement and my engine fund, and wait.

The Engineering Process Starts:  Removing skins and completely disassembling the gear box will be time consuming and expensive. If we can develop a fix that will allow a doubler to be used instead of replacing the part, that would save time and money (and my new paint job).

First we had the cracks examined by X-ray and eddie current inspection. Those tests indicated that the cracks were only on the outside skins, so an engineering approach could be used.

The FAA designates engineers to effect repairs like this, ensuring the continued airworthiness of the GA fleet. These are known as Designated Engineering Representatives or DERs.

Matt works with a DER he trusts (Rocky) on warplanes, and thinks this guy will understand what is needed. Rocky didn’t follow through and ended up costing us about 8 weeks waiting for him. I was very frustrated with the complete lack of progress at this point, and was getting angry. We dropped Rocky at this point.

Considering the hard realities: I began to plan a path forward that may or may not include an airplane in my life. I wasn’t working last October, and truly didn’t want to hammer my retirement resources for the long term.

I’d be moving forward with whatever repairs were required until the airplane was back on it’s feet, in great shape, and airworthy. After that I might just have to take my lumps and sell the airplane while it is in top condition. I’ll get the most for it then, and remove the risk to our resources going forward. Hard to think about it, for sure, but at least something to be considered.

With my time in this amazing machine possibly coming to an end, the amazing journey through the aviation ranks I’ve been enjoying all these years could be wrapping up. the situation was utterly depressing. I realize that I absolutely could not bitch about it. I’ve been flying personally for over 30 years; spent more than a year flying the Dash-8, and have owned two airplanes over the last 20 years. The places I’ve been, people I’ve met, and stories I’ve collected have been worth the investment hands down. Getting depressed about it is selfish, to be sure, but I’ll miss having a nice airplane ready to go very much.

And just as suddenly, it gets easier. I get a phone call while out playing golf that FlightSafety would like me to consider being an instructor with them. Unbelievable! I’m bored with more free time than I’d ever had, and doing this work has been a retirement goal of mine for years.

Not only would I be getting a great opportunity to continue learning in aviation, I would be getting paid for it. The money would come at the perfect time to support the airplanes restoration, and even allow me to reduce the resources we were taking from retirement funds. Furthermore, I’d be doing this because I really wanted to. The timing and synergies of all these events has God’s hands all over it. I do appreciate all of the opportunity and grace that has been afforded to me in my life.

The Engineering Process Continues:  Matt knew a second DER working out of Pat’s at KGED.

I made it clear to this gentleman that I wanted to know how long his work would take. He replied that it would only be a matter of weeks to complete, and by then he’d have his work done. Great news! Maybe some progress is in the works.

The plans came in, and Matt responded with his revisions. Then we waited for another month for the final plans. The DER and Matt had been operating on different assumptions, and no further plans would be forthcoming until Matt had begun the work. I called the DER myself to finally understand how this was supposed to work, and got everyone on the same page. Changes would be made as necessary, the plans finalized once the work was done, and we could get started with what we had.

Matt started the work based on the design by pulling up the top skins on the left wing. Right away he found additional cracks that the x-ray and eddie current inspections failed to reveal on the inner bulkhead ply. That meant that the entire bulkhead piece needed to be replaced anyway. As it happened, I would not be able to use the engineering designs that we had waited so many months for. Frustrating.

I would also now have to wait for Matt to have the time, since he suddenly had a ton of work he hadn’t expected on his schedule.

Progress is being made: The work has begun on the left wings gear box, using a new rear bulkhead piece. I tried to buy a new one for the right side, but could only find a used one. That one arrived with a crack in it too, so this might be an AD in the making. We’ll need to find another. Matt is working to rebuild the left side in the mean time.

Restoring Proficiency: When it does come back on line, I’ll have to relearn how to fly it. Here is an initial punch list for me to start working on when we go flying: