It’s Saturday Feb 9th and the weather cooperated for this second attempt to finish up the project with Matt. We are ending on a good note and Matt is a trusted and valued friend and expert. There is no doubt I’ll be reaching out for his advice as I continue to care for this vintage performer.

I’m finding that my taste for flying in any weather has waned a bit; at least in this machine. I am sure that some of that is self-preservation. Intentionally slowing down my progress as I learn to trust the engines and instruments again. The airplane has been sitting for two years and the return to getting full use out of everything will take some time and effort. I have the time and will make the effort.

The wind and turbulence has been present on every single hour of the 25 hours logged thus far. Not one single smooth ride that i can recall. In fact, the very first flight on Jan 6th was in 19 knots gusting to almost 30.  I sat on the ramp in VFR conditions watching the windsock whip around in various directions that were only generally aligned with the runway. The first flight with Matt went fine but in all the fuss I’d forgotten to visually check the fuel myself.

I was running out of daylight and pressing up against another risk factor – night flying – so I verbally confirmed with Matt that he had added 8 gallons a side. With that assurance and the fuel gauges reporting the same, I decided to launch, but limit that first run to 30 minutes in the vicinity of the airport. That first flight went fine, so I landed and filled all of the tanks to take the airplane home. I’m a dumbass for missing that critical step – a visual fuel check and cap security inspection –  I know how it would have looked if I ran low on fuel or lost a cap on a maiden flight after 26 months on the ground. Mr NTSB investigator – the preflight was intense and done three times. We doubled checked everything, but I have to admit that the fuel thing evaded me. What an idiot.

While pleased that I hadn’t forgotten how to fly a light twin airplane, it was evident that i was nowhere near as smooth in flying THIS airplane than I once was. I was missing steps in my flow process and delayed in reconfiguring. I didn’t like what I saw, and I’m still improving it. Give me time.

Returning for this inspection, I landed at Delaware Coastal just as Matt was arriving in his truck. He followed me down to Ezra’s hangar where we’d do the work, and met me on the ramp. What he was watching is puffing oil smoke from the right engine, so he told me he’d have to look for the possibility of another cracked cylinder on that engine. Ok – I’m game. I’ll either get another cylinder to get me home, and ultimately buy a Factory Reman and swap that engine now. I’m going to do it at some point anyway, so maybe do it earlier and enjoy more of the hours from it myself. I’m 61 and will maybe fly this until I’m 80.  We’ll see how that goes.

We’ll be inspecting engines; re-torquing the gear bolts; inspecting the metal work; and taking a look at why the right strobe flash tube isn’t doing its thing.

Engines: Matt’s first chore was to do a compression check on both engines, and he started with the left where the good news would likely be found. I spent my time removing panels for him, but had to be reminded several times to stay clear of the props while he was adding compressed air. Putting compressed air into the cylinders could get you bonked on the head with a blade. Matt was patient with me and keep pulling me over to show me what he’d found, or how he was doing what he does. He never lost sight of safety.

Compressions on the left engine looked great and there are no outward signs of wear or developing issues. The left engine has an ECI cylinder and an associated AD (airworthiness directive) requiring replacement at 2000 hours. I have another 400 hours left on that side, so we’ll keep running that one a little longer.

The right engine is where Matt observed oily smoke while taxiing in. Previously he found that the #1 cylinder compressions were out of specs and that had prevented returning to service at the end of 2018. The only clue had been reduced compression, and a vibration that may have been related. I purchased an overhauled cylinder to replace that one, and now we are looking for another bad one, potentially. 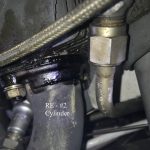 Each cylinder on the right engine actually checked good on compression. The associated picture shows oil on the exhaust stack, however, so Matt inserted a camera into the cylinder to have a look. We were both expecting to find cracks, but found none. What was evident, however, was a pool of residual oil in that cylinder – #2 in the right engine. It was deemed safe to return to service.

Matt and I talked about this at length. The cylinder we replaced had valve guides that were very worn, allowing the valve to wobble around on the seat at times. It is likely that other cylinders of the same vintage could have similar wear. Had I not replaced Cylinder #1, it eventually would have failed. I’d like to head off an issue with the other cylinders, so I left there convinced that I’d be ordering a factory reman and being done with this.

I replaced all of the panels and we wrapped up the engine work. 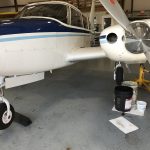 Landing Gear and Metal Work inspection was next. Three of us worked to jack up the airplane just off of the ground. Matt removed safety wire and checked the torque on the gear bolts, while looking around for any signs of disturbance to the newly riveted parts and sheet metal in the area. It all looked good, so we lowered the airplane to the ground while I took off the right wing tip. 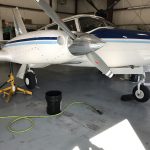 Strobe Light: The right strobe light wasn’t working and taking off the right wing tip showed me that it wasn’t an easy fix, like neglecting to plug in a connector. I put the tip back on and did some research into a replacement bulb. Keep in mind that the wires for this aftermarket install that I had done in 2010 all pass through the area that had been extensively worked on. I was concerned the wire may have been damaged or disconnected inside the wing.

Do i need to order just a bulb (flash tube); part of the fixture; a molex connector; or what? Will any of this even fix the problem? Frustrated that I could not get a straight answer from anyone on what exactly to order, I pulled the trigger and took a chance by ordering only the flash tube – no Molex connector. Turns out that I had ordered the correct replacement; the bulb had been the problem after all. Furthermore, I only needed to remove three screws to replace it and the job was done in minutes. Good to know for the next time.

Transitioning Maintenance: Matt is developing his business and doing warbird restorations and other things. I’ll transition my maintenance back to an A&P I’ve used in the past. My plan is to put another 30 hours on the airplane and take it to Paul at 33N for an oil change. There we will discuss my squawk list; plans for the right engine; and a path forward to maintain and improve the airplane’s capabilities.

I’ll have more to say in the coming weeks. No flying for me for another week or so. My father in-law lived with us and recently passed away. When that is all settled, I’m on the schedule and working for 8 straight days. Probably do some flying in there during daylight, but then again it will be cold and snowy here in the coming weeks.

Another complication will be coming up in the second half of this year as well. I will be getting type rated in a new jet that will keep me very busy and working away from home for weeks at a time.

I still have to get the paint repaired!!  One step at a time.