ay is my birthday, and I started it off by driving up to Lancaster airport (KLNS) to test fly my airplane. The ride took about 1.5 hours and all if it was back roads, low speed limits, and lots of stops. I’ve been spoiled being able to fly up there the majority of the times I’ve visited.

Lancaster Avionics has been checking out my Altimatic IIIb autopilot (Century) for the last few days, and declared it fixed and ready for flight testing. I arrived early and found that the technician that had done the work, Jim Goode, was not available today. Scott would be replacing him for the test flight this morning.

I pre-flighted the airplane and was distracted before I got in. The chocks were still on the nose and the baggage door was still open after I got in. I had to rely on Scott to clean those up, and I don’t think that move filled him with confidence in me. 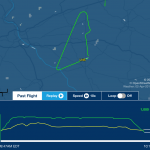 Things quickly became more professional, and I briefed the non-pilot technician on how we should conduct the flight. Actually, we briefed each other. I was very impressed with  how Scott got into the airplane with a plan already worked out. He’d done this many times and wanted me to fly north into an area that I didn’t often fly VFR. He was familiar though, so I reviewed the chart and determined it could be done safely and clear of airspace intrusions during our testing.

We flew north between two clear ridges, and began maneuvering by autopilot. Heading turns, roll mode, and altitude holds with tweaking done at each step. The left and right turns by heading bug had to be tweaked somewhat to give me 22 degrees of bank. Previously I’d seen spirited roll rates and 30 degrees of bank (as I recall anyway), so he tweaked that down to specs.  The pitch trim was working and the turbulence over the ridges was managed well in altitude hold mode.

Next up was the pitch trim test. This is what I squawked originally, and this issue was still there. This should have been caught on the ground, and I’m not sure why it wasn’t. I’ll take it on faith that they wanted more information from the flight test, and were looking to minimize my expense if they could. On that note, Scott wanted to continue the test flight to prove his theory. We’d already seen that the pitch trim system would hold altitude, and now we wanted to see if the trim system would work in approach mode. I called Harrisburg on 126.45 to ask for vectors to the ILS 8 at Lancaster.

Engaging heading mode during vectors, the autopilot tracked true on both heading and altitude. There was absolutely no wing wobble in lateral guidance mode – no hunting for the course. I switched to GPSS mode and that also worked true, so approach capability might be there.

I returned to heading mode and began slowing down to gear speed. With the approach mode engaged, I extended the gear at glideslope intercept and kept the flaps clean. Flying 130 mph (112 knots) is required for the autopilot to be smooth, and that is also my Vfe (max flaps extended speed). I kept the flaps up as I normally do and the approach was flown at autopilot all the way in. 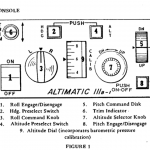 I can use the autopilot in the state it is in now, so if they can’t fix the pitch wheel, I’ll still have a functioning autopilot but with no altitude pre-select. The pitch trim wheel (#5 in the image at right) is the culprit. Sitting for two years unused, I figure that corrosion must have reached a critical point and it stopped working altogether.

Come to think of it, this may have been the original issue that caused the nose to dive on that Angel Flight several years ago. The other problems were found while investigating that issue, so here we are today. At this point, trim cables and pulleys are new, the autopilot has been thoroughly vetted and adjusted, and the pitch trim wheel will be repaired by Autopilot Central.

On the ground I was told that a significant static leak was found and repaired while doing this work. That was interesting news, given that the IFR certification was just completed a month or so ago. During that visit it had been bitter cold, and I had experienced several issues with my PITOT system. Taking off on ice, I was too late to abort by the tine I noticed that both airspeed indicators were zero. It took them three tries and replacing several broken hoses and connectors before I was able to leave on that occasion.

Now I’m told that the static system had leaks that required new plumbing to be installed. It is fixed now, and ready to go. Again I’ll have to take it at face value that the original equipment packed it in during the long sit on the ground. Just don’t know why it was missed on the IFR certs, so I’ll ask when I go back.

The good news is that the autopilot is useful and accurate in its current state. The bad news is that we need to find someone that can repair it if I want all the features to work. I authorized a call to autopilot central to attempt to return the unit to 100%. Mark Forth coordinates all this work and made the call to see if Autopilot Central could do it. They said that yes, they could take care of the repair for that particular part. I am very lucky that it could be fixed and that I will be able to get some additional life out of it.

Scott went out to pack up his tools and bag up all of the hardware for the autopilot head. I’d be able to fly the airplane in the interim, and more importantly, would be able to move the airplane down to Smoketown (only 6 miles southeast) for the paint repairs I needed. Awesome!

Scott and Mark told me they’d drive down to Smoketown and re-install the repaired unit when it came back, if the paint shop still had it. That is excellent customer service, but I’m not sure if that will help at the end of the day. Still – it was cool that they offered to do that.

The service provided by Lancaster Avionics was very good, in my opinion. It appears that some things were missed in the process during each of my visits. Their pricing is fair, however, and the support they provided made up for any missteps. I’m happy to have these guys for local support.

Scott’s conduct of the test flight was first rate and professional. Getting the autopilot operating without the hunting is a special thrill as well, so it’s all good.

I departed for Smoketown and the paint shop around 11am.  Before I left I sent a text to my sister Susan, as she planned to pick me up there for a birthday lunch. After lunch  I’d have her drop me at my car, which I necessarily left at the Avionics shop. With a birthday dinner planned for later that evening, my time table was actually working.

The landing at Smoketown was not my best. I had a bit of a tailwind landing rwy 28. The runway is 2700′ with obstacles, and a tailwind there should be taken seriously. I’m never going to land on runway 10 though, as that would be over an obstacle and downhill to boot. Not going to happen.

Mild gusts made precise airspeed control on final a challenge. I landed longer than usual, and used more runway and brakes than ever before. Expecting to land, since I had done it so many times before, I was not as prepared to go around as I should have been. As it was, I rolled out with plenty of room, but needed more brakes than I like to use. All is well that ends well, I suppose. 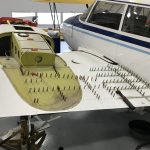 Kendall owns and operates Lancaster Aero, the shop that has painted both of my airplanes. He is giving me a considerable break on the paint repairs. I met him to review the work when I dropped off the airplane.

I added wing seals and repainting the gear doors to the work list. Both doors show signs of peeling, so I’ll have them redone while it’s there. I also told him that if he found other areas on the airplane, to just do them and add the charges necessary. Kendall has been great and the paint looks wonderful. I can not wait to get it back!!

Then I learned that the paint repairs would be done tomorrow!!  Wow!!  That means I’ll be able to go get the airplane back home over the next few days. Awesome news for sure. Dave is an instructor and contract pilot at work, who offered to fly me up in his C182. I’ll return the favor when he needs to get his airplane up there for prop work. Life is good!

My birthday was all the more special when other pilots kept stopping to admire my airplane. Met several nice folks on the ramps we visited yesterday, and they all made me feel good about N833DF.