This post has been half finished for a month now. I’ve just completed a G280 instructor training phase that I’ll discuss in a subsequent update, so I’m back to finishing this up. It is a little dated, but I’ll put it out anyway.

N833DF Engine Overhauls are due back at the end of this month. That means the 7 week estimate was only off by 110%. In terms of aviation projects, I’m ahead of schedule and happy about it. I cannot wait to get my hands on this airplane and get moving again.

I’m on another work trip to DFW, and am taking the time off to learn about Lean of Peak operation in the new engines I have coming. My homework this trip is to learn more about the EDM 760 I’m putting in; how the electronic ignition and GAMI injectors should be operated with the new instrumentation, and how I might want to operate Lean of Peak after the break-in period. I’ve been using a number of resources to expand my knowledge, and that all started with reading Mike Busch’s book about engines. 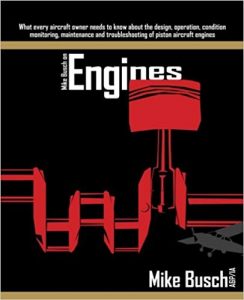 I started some time ago reading ‘Mike Busch on Engines’ as a way to decide how to decide when to overhaul my engines. I’d been having strange vibrations that were rotational in nature, and proven not to be related to the props. These engines were talking to me and I needed to do something.

I learned from my first read that Mike likes to run his engines until their condition dictates replacement or repair. He operates his engines far beyond TBO and keeps on going. I came to the conclusion that he can do that because of his skills as an A&P. He not only observes their performance, but can also directly assess their physical state. I don’t have that advantage, so a different approach is required.

His book is still a valuable resource, even though I’ll plan on being much more conservative than he is. I’ve read it twice now. On the first pass through, I discounted the Lean of Peak (LOP) discussions because I deemed them to be far too risky. I felt that I can afford the extra gas to keep my engines safe, so why take the time to learn something radical. The purpose for buying the book initially was only to help me decide the best course for correcting the engine issues I already had. I certainly didn’t need to stress them any further.

With the decision being made to overhaul both engines while I’m young enough to enjoy my ‘going out airplane’, I would later come back to read Mike’s book for a second time. This time through – everything is on the table.

I searched YouTube for the EDM 760 and Lean of Peak subjects and found a video by Martin Pauly. Martin did a very nice video explaining the process he uses in his Bonanza. He did it in such a way that made it easy for me to understand, including a discussion of the red box. I think he also discussed the Big Pull concept as well. As I continue to develop my own procedures, I’ll return to his video to get more out of it after I do some additional work. Very well done indeed.

The G280: Just came off of a practice session in the G280 last night. I very much enjoyed to two instructors I was paired with for the evening. They both have a comfortable, professional demeanor and are teaching you something the entire time they are with you. Our mission was to give me a chance to operate the simulator while teaching a recurrent session to two clients.

We briefed for an hour and I laid out what I hoped to do that day. I also admitted the things I didn’t know how to do, or thought might cause me trouble trying to execute. After that, we jumped in the simulator and I ran the session. My impression is that the equipment is first rate. The jet itself is the most capable machine I’ve flown, and the simulator equipment mirrors that. It will be a joy to work with compared to the older equipment I’m used to.

Earlier in the week I was in there with my boss for an hour getting an overview, and then spent two hours on my own in there. This trip has been fun, though I miss being home and constantly have to buoy my own frame of mind to stay positive. It’s best to keep working, even on your days off, since there is nothing much going on in DFW.