Oh yeah – winter is here. I have cancelled or delayed two recent flights due primarily to wind. On the first flight,  Bev and I were to head down to see Mike and his family down in Virginia. There had been a weather system come through in the previous days, and winds were expected to remain gusting to 39 knots in both Delaware and Virginia. I could certainly have flown down in those conditions, but was worried about icing in the broken decks and bouncing the wife’s head off the ceiling as we went.  Best not to go.

Mike and Yvonne were flexible, and a delay of one day paid off with a smooth flight down and back on the 22rd.  Rick’s aviation down in Newport News set us up nice with ramp space and a rental car on short notice. They have been good to deal with each time I’ve been there, and Newport News is the closest airport to Mike’s. 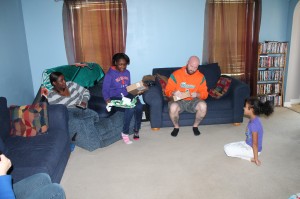 Flight #2 was to be out to Maryland Airport (2W5) to see Frank and Susan and Owen.

This was to be a few days after Christmas. By that time, another system had come through leaving gusty winds – cold winds – and low overcast clouds with ice in them. I presume they had ice anyway.  I cancelled this flight too, and we drove the 2 hours each way to Frank and Susan’s. This was a good call, certainly, as the winds stayed high throughout the day.  Ice wouldn’t have been much to deal with, since I was able to observe that the overcast skies were fairly thin.

Yet another system was due in on the 29th, so I took the time to get in a VFR flight on the 28th on my own. That was a few hours to enjoy a truly amazing machine.  The flap springs on the left side are weak, so I’ve been getting quite good at no-flap landings.  The last landing required about half of 33N’s 3500′ runway….   Smooth as glass.