N833DF Engine Break-in coming along!  I have been continuing to fly off the first 10 break-in hours on the engines, while sorting out whatever work remains to get the airplane into fighting condition, and 100% ready for instrument flying.

Things tend to wear out when you aren’t flying routinely, and this airplane has been down for most of the last three years. I found a few issues and will get those sorted out as we run the engines in. Fresh engines are exciting!!!

Before we get to that…..

Everyone is impacted by the virus. Each of us has had some aspect of their lives put on hold or changed measurably. Try to stay positive and grateful for everything in your life. This too shall pass. The financial markets may dictate I continue working for a few more years, assuming that remains an option.

My good friend Jim just put his plans of upgrading on hold for several months. His airline is asking for voluntary unpaid leave from its employees for up to 3 months, and he decided to take it. His reasoning was to protect himself and his family, and to be there for the parents if need be. Only weeks ago he was planning his Captain upgrade, and now he is taking unpaid leave.

As for me, I returned home from Savannah G280 training by car on Wednesday morning, March 18th. I canceled a return flight scheduled for the following Friday, and had FSI rent me a one way rental car home. I made the decision to come home more to avoid getting quarantined away from home than out of concerns of getting the virus. I made the decision to drive out of an abundance of caution in protecting my wife and family from exposure for as long as possible. I appreciate the fact that FSI supported both decisions. The thought of leaving my wife home alone to deal with her mom and all this for several more weeks weighed heavily on my mind since this thing started.

I know I made the right call to come home, but I feel guilty about not following through on the work assignment. Making the right call doesn’t always feel good. The decision was made easier considering that the primary missions were accomplished. I am now initial ground school qualified and have completed my FlightEx flight experience requirement. The only thing I didn’t do was build more time toward becoming a TCE (examiner).

I learned allot down there from several real experts. I’ll be documenting and applying what I’ve learned mentoring others in Wilmington this week. While there, I’ll take normal precautions and practice social distancing. 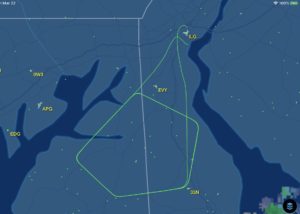 Now for the fun part! N833DF is flying again, now that I’m home. For the last several days, I have been flying the same VFR pattern to the south of Wilmington, DE. Cruising along at only 2000′ and full power.

Initially I keep the mixtures full rich and cowl flaps closed, but I am growing more concerned that the oil temps never get into the 180 to 200 F range they should be in. Number 4 cylinder on the left engine is the hottest limiting temperature, and I keep a close eye on that one.

Looking back, there was never enough time to fly it to Savannah. I’m taking all of the pressure off of myself at this point and appreciate that I finally threw in the towel and slowed everything down. Here are just a few of the things that could have bitten me, or could have been one of the other final pushes that caused me not to fly.

What is so crystal clear to me now could not be seen in the blind push to get the project done. Lots of stress trying to gain control over the project instead of pacing myself and accepting delays. The work that was done is impeccable.

Lessons learned. I’m home now and catching up.  Going flying tomorrow and that will be it before the 10 hour oil change.