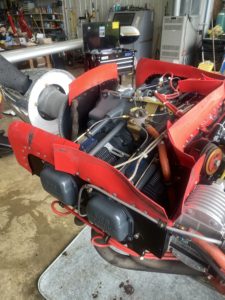 Oil Change Complete! I dropped off the airplane yesterday morning, and both Paul and Ralph jumped on the work and completed it in one day. You can see the squawk list on yesterdays blog, so I’ll just focus on the highlights today.

The cowls on both engines were removed and all mounts, mounting points, fasteners, and general conditions were checked once again. Two of the exhaust mounts (straps with metal end caps) were brand new and both failed. These are WEBCO PMA units that run $56 apiece.

The issue was reported to WEBCO. Two new ones were installed and I’ll be looking for money back from them soon. If these new ones fail as well, we’ll get the piper part installed and report the issue. Minor point that doesn’t affect my flying. No other issues were found. No leaks and no looseness.

On the left engine, CHT #3 had been erratic. You can see here that the brown line is CHT#3 zooming up over the red line (450 deg F), and then right back to normal. This was from a flight on June 6th. On other flights, the CHT #3 went to +700 F and right back down to -90 F. At least I knew with great certainty THAT wasn’t happening.

Paul replaced all the connectors in the CHT#3 line to rule out crushed and shorted connections. The character of the anomalies changed for this latest flight, with the CHT dropping to zero, but the issue remains. JPI has been directly asked to replace this probe.

Next up was the issue of the left cylinder #4 being so damn hot that I have to shallow out climbs and reduce power in cruise. On JPI’s suggestion, we swapped the #4 probe and the #2 probe. Now here is where it gets a little sticky. The temperature problem did move to cylinder #2 in that it is now the hottest cylinder. It gets complicated though, as the guys did quite a bit of work sealing up all my new baffles.

With the cowls off, both engine baffle systems were re-inspected and fireproof sealant was added to seal off potential leaks and maximize airflow for cooling. I didn’t expect any noticeable improvement from this, but Paul wanted to try it.

As you can see from yesterdays flight, all temps now are in range and reasonable (except CHT #3 of course). The climb was unrestricted on a hot day and never got much above 400F. Wow!  That was nice! I closed the cowl doors for the entire flight.

As a result, I asked JPI  to replace both the erratic and the hot probe based on these results. I included the ‘hot probe’ as well because it was just a bit hotter on this flight than previous flights. If they send me only one probe I’ll be ok, since It could reasonably be argued that the sealed up baffles caused the temperature to drop on cylinder #4.

I’m now on 100W oil with CamGuard and have 50 hours to play with it. I’m working in Texas in July, and considering flying. Storm damage is my real concern there, while it sits on the ramp. Both trips are relatively short, and I’m seriously considering avoiding the airlines and flying myself.

No squawks today, other than I left bugs on it last night and the spinners really need to be polished. I’ll get to that work soon.