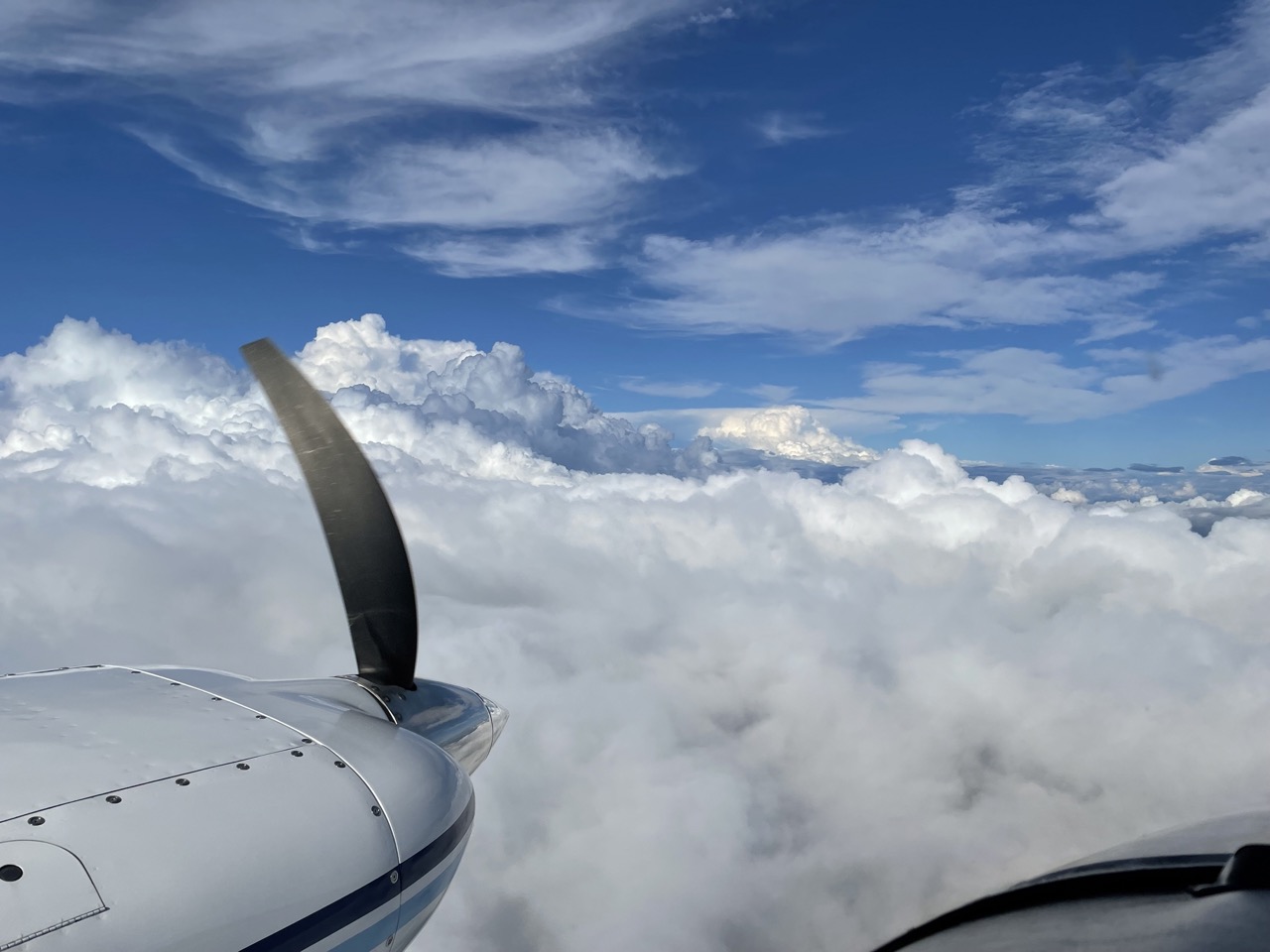 Lancaster Aero: I’ve been vying for a position at the paint shop to address wear spots on the PA30. The image at left is a typical example, but there were also a few dings from maintenance and general usage. The plan was worked out with Kendall at Lancaster Aero, and included calling in August to find a random opening. The airplane would have to be painted outside, the weather would have to be perfect, and an opening would have to randomly appear. I wanted these guys doing the work, so I took a shot.

I called on Monday the 8th and it was arranged I’d drop the airplane off that weekend. I did that, but then a trip popped up that needed me. I wasn’t going to lose my paint spot, so I dropped it off and drove to Latrobe on the 14th.

Flight 93 Memorial: Since I was driving out there anyway, I decided to stop at the Flight 93 Memorial on the way. I spent 2 hours walking the site in the pouring rain. It is a somber experience, as you’d expect, and a reminder of what we are facing as a nation.

Nova Scotia Flight: On the 16th, I flew with a contractor PIC I hadn’t flown with prior. We spent the night in Nova Scotia, and the area was not what I expected. I’d say it was clean, mostly very modest homes, but a bit run-down. Scheduling put us in the only rooms available – an aged and well-worn Travel Lodge on the water front. This place was beat, but at least it was clean. My executive suite overlooked the parking lot one level below.

N833DF Paint Update: I did get some unexpectedly good news when I got to my hotel. An unexpected delay in a paint project had allow them to get my airplane into a hangar. The work I had asked for had been completed, and I’d be able to pick it up when I got home. Out-Freaking Standing!

No rental cars were available on the island, so we cabbed from the airport and out to one of the only restaurants in the area, the Governors Pub. I had an amazing steak and an after dinner Grey Goose before finding the same taxi driver to get us back to the hotel.

Winters must be brutally cold here. The next morning we woke up to a steady pouring rain. No one could find an umbrella at the airport, so I was thoroughly soaked by the time I finished preflighting. Good thing I had another pair of pants and was able to quickly change before the pax arrived. The flight home was uneventful, but it was all right seat time for me on this flight. We landed in Latrobe late afternoon, too late for me to fly home. I had a nice flight home in N833DF the next day.

Landing N833DF in Wilmington: I’ve been doing quite a bit of flying lately. The belly on the right side had accumulated a bit of oil on it that i found during my post flight inspection. That must have been blow out or spillage from the oil that had just been changed, since the levels remained good. The oil on the belly was clean and fresh, so I did not suspect a problem. I’d have to get it cleaned off before the next flight though.

I’ll write a separate post on my first use of the process for returning my airplane home and into the Presidential TFR. I had to arrange that after I returned from this flight. For now – let’s continue with the G280 trip theme.

Kentucky Flight: Each day I continue to get better from my July bout with COVID. It really kicked my ass and the most telling thing for me was the slow slow speed of recovery.

This week I got the call to fly with my good friend Dave M on an easy day trip that was leaving on Tuesday the 23rd for Kentucky and back. Dave had been visiting friends in Roanoke, VA and would fly back on Monday the 22nd so we could travel together in my airplane.

Dave arrived in Wilmington around 3pm. There were thunderstorms about and rain cells developing on the entire flight path to Latrobe. It would be a challenging flight, but I felt more comfortable having a second experienced decision maker onboard. One that could help with the strategy, communication, and decision making.

Dave and I developed a plan and did the flight efficiently. As you can see from our flight path, Dave and I had to work with ATC to change our entire flight path to the north shortly after departure, and then to divert significantly south later on to avoid a line of buildups.

The cells didn’t show up yet on ATC radar, had ceilings around 30,000′ or less , but flying through them certainly wasn’t an option. The turn from south toward Latrobe can be seen on the left side of the image, where we flew between two building cells and finally broke through.

In the G280: The next day was supposed to end back in Latrobe at 8pm. That’d be too late for me to fly home after a long duty day, so I had a room booked for that night as well.

At the last minute, the airplane owner (The big boss) showed up and changed all that. Now we could plan to be back in Latrobe by 4pm. I’m not giving up my room because these flights change inflight. I might be able to get home early, but there was no way to be absolutely sure.

As he was boarding, I learned that the big guy is a nervous flyer. He wants to know who his pilots are, and fortunately recognized the PIC I was with. We were both contract pilots. He knew Dave well, and respected him. He knew my name, and assumed I was full time, but wasn’t particularly happy when he found out I wasn’t. This guy pays the management company big bucks to hire him pilots he can trust, and recognize, but the only full time G280 guy they have is sick with the COVID. None of that is my problem at the moment, but I’d do my best to make everything go smoothly.

The PIC is Dave, and he is a friend who loves flying for these guys. Dave supervised my initial flight in the G280 on a dead leg (no pax). I’ve done a number of flights in this machine by now, but all of them dead legs. This one was live and nervous, but Dave encouraged me to get on with it.

Landing at Lexington: This was Dave’s leg and his landing on RWY22 was flawless. I was surprised to see a runway had been removed at KLEX since my last visit. That was due to an accident where the jet crew did not verify which runway they were on, chose the short one, and it wasn’t long enough to achieve flight. We’d be here for a few hours and then depart for Madisonville in western Kentucky.

I assumed Dave would do all the flying, and stressed that I’d be fine with that. The big guy was back there and good impressions were important. I had less than 10 takeoff and landing cycles in this airplane (hundreds in the simulators), so It’s all good. We left Lexington and headed for Madisonville with Dave flying, when he decided I would be doing that next leg.

Departing Madisonviller (2I0): It was my turn to fly. The winds were calm for my takeoff out of a skinny strip in Madisonville, KY. We were cleared only to 4000′ initially, so I reduced power and limited airspeed to avoid blowing through it. Just a few bumps in the climb and we were on our way.

Broken layers covered the ridges and required us to almost overfly the airport before we could identify it for the visual. I descended for a right hand visual pattern for landing on Latrobe RWY 24. Turning base, I clicked off the autopilot and flew it down to gain some hand flying experience. I’m happy with my landing, and honestly didn’t try to grease it on. After landing I went easy on the Thrust Reversers (TRs) and light on the brakes to ensure a smooth deceleration. Very cool. So very cool.

Dave encourages me to keep getting better and I love flying with him. He makes it easy and knows what he is doing.

I taxied in and we off-loaded the passengers. Ground crew are full time at this company, and also take care of my airplane when I fly out here. I let them knowI’d be leaving in an hour, and asked them to pull my airplane out of their hangar for me. Then I got into my post-flight duties; covering the external devices, dumping the unused coffee, and cleaning and stowing the coffee pots. With that done, I left Dave to the paperwork, jumped in a crew car, to checked out of my hotel. That was only a 5 minute drive up the road, so I was back in no time.

When I returned, the jet was already in the hangar with my luggage still inside. My airplane was being pulled out as I drove up. I transferred my gear, thanked the line crews, said goodbye to Dave, and pre-flighted my airplane for the return flight home.

Flight home: I enjoyed a similar weather experience coming home on my own. It wasn’t as busy, but right in the middle of the flight I had some key decisions to make. I ended up passing within a few miles of a building cell, but came through a cloud canyon and popped out in the clear on the other side.

Now it was a straight shot to BUNTS intersection, the route having been changed for the third time by ATC. ATC does a great job keeping me clear of conflicts, so this isn’t a complaint. Getting closer to home, I asked for 5000′ to get under the cloud layer for smoother air. My descent was granted and the result was as expected. On more ATC re-route to PADRE and then direct Wilmington Airport and home. Moving along at 180 to 200 kts ground speed.

N833DF flew flawlessly and I loved it. One hour and 10 minutes home. The air at 9000′ was crisp and clear, topping the majority of the broken layer. This airplane flies down in the weather most of the time (typical cruise altitudes from 8000′ to 13000′ for me), but it’s fast and the diversions required are less painful.

The next day: I went back to the airplane and washed the belly. I also post flighted the airplane and began to polish the spinners. I’ll get back to those with some fresh polish and a buffer maybe tomorrow. I think I’ll also pull the panels and check around for exhaust mounts and general conditions on each engine.

This was a fun week, and I’m finally feeling alive again with respect to my health. This weeks flying was particularly rewarding. I had a good time.

Fly safe you all!