We started the day around 5am from an overnight in Williamsport. From there to Philly was my leg in Clear VFR. Just a touch of IMC.  Flew this leg by hand because I wanted to.  The approach to a visual RW26 was a challenge because the Captain called it insight before I had it.  We got it sorted out and the landing went fairly smoothly. 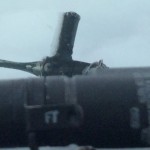 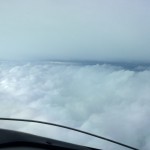 Daylight arrived prior to me flying the next leg up to Albany.  We had some IMC and rain in the area descending out of 16000′, best that I can recall. We even saw some ice this trip.

Approaching the airport from the south I could see a rain shaft maybe 3 miles from the threshold of runway 19, the landing runway. I had the choice of flying an ILS or a visual, and I chose the later to keep our schedule moving.

Passing over the last mountain at 4000′, I descended smartly to pattern altitude and flew the thing like a Cessna 172. Right downwind; right base just touching the rain shaft; final in light rain. Nice touchdown and off.  The fall colors were all around us.  This flight made the day worth getting up early.