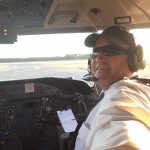 Departed Salisbury (SBY) to Philly yesterday in bright beautiful sunshine. Not a cloud in the sky as we watched the sun come up, wondering why we had a ground delay of 45 minutes before we could depart. Flying with a two folks today that I hadn’t flow with before.

It was the Captain’s leg getting into Philly, which gave me the opportunity to do my PM thing and at least establish some trust that I knew what I was doing. Most things went fine, but I was distracted looking for traffic, and he had to remind me to finish up the descent approach checklist below the line. I’ll spin back up next leg.

Getting into Philly, we had time for coffee and would have been able to get back on schedule to our next stop – Roanoke. Unfortunately, we were delayed about 20 minutes beyond our expected departure when the computer system wouldn’t kick out our release. The day would go like this, we’d soon find out.

Leaving Philly – the Captain gave me the leg into Roanoke. The area is beautiful, but also full of rocks that loom large. I was happy with my performance, but learned and re-learned several things. This would be a visual to RW6, and I knew to look at the ODP and approaches ahead of time to see that circling north of the field was NA. I planned for and flew a visual right downwind to runway 6.

I think only a video of what I was looking at would do justice here, but that isn’t available, so I’ll talk you through it. Beautiful sunshine with scattered high clouds to the south as we flew adjacent big rocks and over the town of Roanoake on the right downwind. Captain had the radios and called a wide right downwind, so I just now realized I flew it wider then he would have – probably.

Slightly beyond mid-field right downwind we were cleared for the visual. I cut in at an angle that maintained adequate clearance of smaller mountains / hills / rocks and I cut the corner to a somewhat angled right base leg. Slowing and descending I got the airplane configured and aligned on final somewhat high. The Dash covers lots of sins, and she came down just fine.

Runway 6 has an upslope on the first 500′, that crests and levels off somewhat. That made it tricky, and I didn’t kiss it on as smoothly as I have before in 100’s. Oh Well. All-in-All it wasn’t too bad in my view.

On the ground, I forgot we were swapping into a 300 and unnecessarily (but efficiently) pre-flighted the airplane. Looked like an idiot, but that won’t be the last time that happens. Our 300 was delayed inbound, so we had an hour we didn’t expect. Headed upstairs to get some lunch, and then found out the cumulative delays led to a cx round trip to Greensboro. Once we got to Charlotte, we’d be done.

Captain decided to give me the next leg as well, and that was gracious. He knew that the ODP and special procedure would be a learning moment for me, and we spent a few minutes discussing this and setting up my radios. Nice touch.

The special procedure (loss of an engine) is to intercept ODR 063 degree radial outbound to 4.0 DME off the LDA 6 localizer; then right turn 070 to 5000′, as I recall. Captain was well ahead of me there, and ensured I had my radios set up fine. If I was doing this on my own, I’d have spent 15 minutes reviewing and setting things up. Here I had just a few minutes and other things going on, so I appreciated the team work and education.

Once the Captain ensured we were on the same page to avoid the rocks, we departed for Charlotte. It always amazes me when we fly a procedure around rocks in the clear that I’ve done before in the clouds and without seeing anything. It kinda emphasizes the point to be on your game out here…. Delaware may be flat, but other places not-so-much.

My last landing was a bit long and a bit hot, but it worked out. I’m still working on getting better at this. I’ll be with this crew for the next several days, and will have the chance to see how this Captain likes to land with less power. That will add something new to the toolbox.

Meanwhile – the Twin Comanche sits in the hangar back in Georgetown. Can’t wait to pull it out, wash it, and take it flying. The new camera (Hero 4 Silver) will be installed shortly so that it is easy to get in and out. Looking forward to the upcoming spring flying.

Later today I should get my April schedule in it’s initial form. I’ll start planning on an Angel Flight for April, and hope I can keep the 5/10 mission date open when May comes along. I may end up bidding a build-up line around that date. We’ll see.

Thanks to Beverly for the support that allowed me to make this leap. Not a bad way to spend a work-week.

Fly safely and enjoy your life! 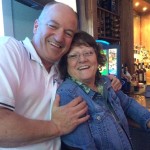