Yesterday afternoon had two particularly educational flights in weather. Flying from Erie to Philly in the afternoon had us deviate significantly from what was a rather direct routing, to a southern deviation through Harrisburg.

My Captain effectively used our radar and worked with me to make decisions on deviations in course and altitude. We ended up weaving our way through the storms in both dimensions – course and altitude – and were given carte blanche by ATC to do what we needed to do. CRM was effective, and the storms were significant.

My GA (general aviation) weather experience came into play here, while my commercial education keeps building. NEXRAD would be a welcome addition to the DASH cockpit in my opinion.

The visuals during the flight from Erie to Philly was truly IMAX worthy. I wish I could legally video flights like this and share the experience. The variety of colors in the moisture laden clouds as I was banking and descending through a hole were captivating. The hole had remained open between two large and building cells.

Still in fading daylight, white sheets of rain created two walls on my right with a mile wide break between them…  beckoning for the unwary to venture through. Dead ahead was a cloud bridge from the cells on the right to the cells on the left. Radar showed this was not a cell at the moment, but spill-over that joined up with the cell on my left.

Down below – under the bridge – was the dark green ground. Mountains dotted with spinning windmills for the environmentally conscious. Were you to be standing next to one of those windmills, you’d be furtively looking for shelter from the lightning and rain. I pulled back the throttles and flattened the props, slowing to turbulence penetration speed once again.

Down through 9000′ we saw that that hole popped out the other end. Rays from the sun lite up new hills in the distance; confirmation that our path and plan were working. Further down to 5000′, we knew we’d gotten through the worst of the weather, but had one more cell yet between us and Philly. Another deviation to the north defeated that blocker, and we were home free once again.

The radio chatter during the entire ride was ripe with deviations. Lightning, sheets of rain, and cumulous cells in all forms of development and dissipation were all around. Two pilots working together and with ATC continuously to keep the passengers safe. Very cool job indeed. 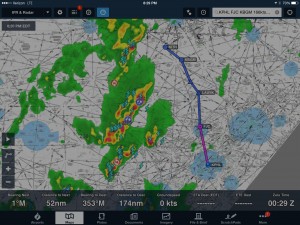 Sitting in Philly now, the  last leg of the day up to Binghamton really looked like it wasn’t going to get done, in my opinion. This is the image I showed to the Captain as we were loading passengers. KBGM is Binghamton, our destination. KITH is Ithaca, our alternate. Neither looked particularly appealing.

The captain was concerned about our reserve fuel to any other typical/approved alternate, should the weather beat us to Binghamton. I knew we had a ton of other airports in the clear to the east – Piedmont approved or not. There was a clear escape path east, so I was ok to go if the Captain agreed. He could always call dispatch as soon as it became clear both our primary and alternate airports became unreachable, and develop a legal alternative. There’d be options.

My leg again, the flight at night was treated to an awesome light show from the continuous cells to our west. We were cleared direct to the airport, and I kept max power all the way in a race to beat the weather.  While the Captain was off the radio getting updated weather, the call came in from ATC – “There is a cell 20 miles west of the field; 40 miles wide; with moderate to extreme precipitation.”. I just told here – ‘we are aware’.

Binghamton was still reporting clear, so ATC kept stepping us down until we reached 3500′ in the area. “Binghamton is at your 1:00 o’clock, report the field in sight”, the controller called. There was a significant scattered layer of clouds in the area, and the clear weather forecast was either old or inaccurate,  was told the captain I wouldn’t be turned toward it if I did see it. We were between the storms on our left (west) and the airport on our right, so I figured a night ILS was the best choice. He agreed.

The airport came into view on my right for a few moments, but turning toward it would have been a mistake. We didn’t even report it, and it quickly disappeared.

We continued on vectors for the ILS 16 and were turned base. At this point I slowed toward 180 kts – in and out of IMC. On the final intercept turn, I used 50 percent torque to achieve 170kts and turned off the auto-pilot. Down the chute and broke out somewhere around 1000′ as I recall.

Very cool experience all around.