Experienced a real joy yesterday flying into one of the busiest airports I know of. Reminded me why I made this move. 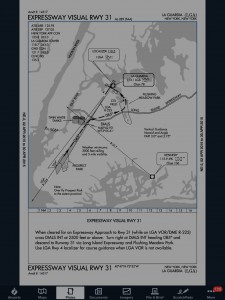 Flew into LaGuardia via the Expressway visual 31. This is shown here as simple visual description of how to fly an airplane by following points on the ground to blend in with other air traffic landing on a particular runway (31).

Crystal clear weather and light winds. This approach procedure is a mini version of the type typically flown into large airshows like Oshkosh. What you get to see on the way in, however, is truly stunning. The bonus is you get to do this while flying a complex airplane and doing a dozen other things that need to be done.

The tourist in you will want your right eye looking for the Statue of Liberty; Hudson River; East River; New York City Skyline in late afternoon; Rikers Island for you Law and Order fans; the site of the 1964 Worlds Fair; Sports arenas; and oh – a cool and busy airport. This is one of the coolest airports I get to fly into.

Seeing the white fuel tanks at the start of the approach, I was cleared to begin. New York City is in full view and demands you at least glance at it. I clicked off the autopilot and banked right to 85 degrees – furtively looking for the Long Island Expressway described so I don’t mess this up. I found it in a microsecond, since it is only about 8 lanes wide. Traffic was choked and looked stressful.

Continuing to slow down and descend, I started intentionally drifting to the right of the expressway. I had judged correctly that the bank around the sports complex would getting a bit sporty if I didn’t, but the Captain reminded me to keep it tight over the expressway. That is what was expected, so Full speed ahead – here we go.

Continuing to slow,  I banked left around the new sports arena in Flushing Meadows park; requesting gear down as the speed dropped below 158 kts. Continuing to slow, I banked left again in a continuous turn that would line me up over the water with the runway. Flaps 15 and condition levers max were configured in the turn as the final steps in configuring for landing.

On final now, I hold 140 kts so as not to get run over by the guy behind me. My touch down is like rice paper floating on a breeze, in my opinion.  I think the Captain might describe it more like a bag of Sakrete falling on a plywood deck, but Captains tend to be more critical. We keep it rolling off the high speed and start winding our way to the terminal.

Wow – what a treat. They actually send me a check for this. I really wish everyone could see what I see.  It’s a blast.