Where to begin? I’ll tell you right here I’ve been boring people talking about it. I know it and am working on controlling that. There is too much to write about for me to find the time – the book I want to write is still calling me, as are other recurrency obligations still looming.

Oshkosh 2015 was not even a week ago. Bev and I flew out and camped for a few days. The trip was amazing and my wife is a real trooper. It turned out to be one way for us to find time to be together and enjoy each others company. She is amazing and worked like a trooper to get us ready and make a home in a bumpy grass field.

On the way out to Findlay, Ohio, we entered IMC and rain. No biggie, but the brand new windshield began to leak while in light rain. It was a pretty healthy leak for being only light rain outside, but the vacuum inside the cockpit at 8000′ and 172 knots was sucking it in like a straw. In years past, something unexpected like this would have created great stress and even anger in me. I’ve spend a considerable amount of money and effort getting to a squawk free state for Oshkosh, and this really wasn’t what I was looking for. 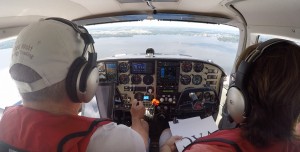 I didn’t get angry at all, surprisingly, but I did make a call to my friends at Dutchland Aviation at Smoketown airport to discuss the issue. As usual, Dennis stood firmly behind his work and I promised to coordinate a visit after Oshkosh. I’d also get some side window sealant replaced by the paint shop on the same field – it had come off fairly soon after all the test flying I had done to return the airplane to service with new paint. It’s all good. I put the matter out of my mind and brought a towel forward just in case.

On the way in to land at Oshkosh, we we

re one of the last airplanes to arrive before the field closed at 2:30 PM for the airshow. The ATIS told us that all camping on the field was full and closed, and there was specifically no room for twin engine airplanes – even in general aviation parking. I started weighing my options (there weren’t many as I was on a 10 mile final to a closing airport), and preparing to divert to Fond Du Lac. As I’m ready to pull that trigger, the approach controller tells me to continue – she had called the tower and they found more room for me. We continued on in with our IFR arrival on the GPS 27 into the show.

On the ground now, we had no idea where we should go. Is (VAC) vintage aircraft camping closed or not? We held up both 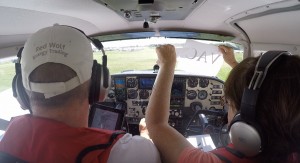 signs (GAC for general aviation camping, and VAC for Vintage). That only confused the ground handlers who I determined had no way of knowing about what we’d heard and experienced coming in. We stuck with VAC and began our long journey. 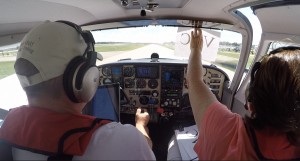 The ride was rough and I had to be very careful to go easy and ignore the few ground guides that were over-eager and wanted to pick up the pace. In fact, I should have stopped the process before being directed down a poorly paved gully; up the other side; over a poorly paved taxiway; and then into the very roughest grass at Oshkosh on the south perimeter of the airport.

I paused the process twice to discuss this with my guides, but they urged me on. On the second stop, my guide informed me not to worry – EAA had insurance.  I chewed on that one for another 100′ before I watched two eager volunteers urging me on over very rough terrain to where they wanted me. I’d had enough – and shut the engines down right there. I should have made that command decision on the first gully we encountered, but I didn’t.

We got out and I explained my position.  It didn’t take long to push us back so we could camp right there.  I told them I’d made a mistake listening to them, and now we’d have to find a way out when it was time to leave that didn’t involve me powering out of where they had me.  I positioned and supervised volunteers and we turned the airplane where it was and set up camp. While I tended to the tie-downs – Bev built a house in the middle of nowhere.

We literally were the last airplane in the last row on the south 40 of Vintage Aircraft Parking at Oshkosh 2015.