I plan to add more posts to the site going forward, particularly as training comes up and the potential for upgrade looms near.  Writing my book has taken more of my time, admittedly, but I’ll find a balance.

During a casual conversation with my wife from my hotel room the other night, Bev mentioned that she was surprised I was still doing this job – my second career in flying. The schedules are brutal and I’m spending allot of time alone in hotels. Getting up early and working very late. Missing events with friends.

She went on to say that the flying must be great for me to keep doing this.  So I starting thinking about what it as I was after. First and foremost – the flying. I’ve always wanted to be very good at it, and this is a chance to further develop that skill set. I think the flying is enough – just barely enough – to keep me going for awhile.

The other good things that make it survivable are the people. You get to meet so many characters doing this work that the entertainment and education never ends. It’s just too funny – the good times on some of the overnights. I also enjoy the chance to exercise and explore towns like Ithaca, Watertown, Hilton Head, and so many others during off times.

Continuous training – official and otherwise – is another asset that can feel like work at times, but remains invaluable.

I’m just back from a 3 day trip with my original training Captain. I was hoping he’d get a training subject and I’d get displaced – meaning I’d get an extra 3 days off and just go back home. That didn’t happen though, so we launched on what would be a good trip with some IMC (Instrument Meteorologic Conditions).

The first day included four legs; Salisbury to Charlotte, and a Lynchburg round trip. The last leg would be ending in Hilton Head. The first leg was mine, departing at 7:00 am out of our base in Salisbury. My wake-up was at 4am to be there on time at 6am. We arrived in Charlotte to my first instrument approach on this trip to runway 36 center (ILS 36C). Descending through 4000′, I clicked off the autopilot and hand flew down through clouds and light rain into Charlotte. My approach and flare was spot on, and I really squeaked it on gently. I did notice that at the last few seconds of the flare I was tickling the 6º pitch-up warning message on and off. I did make the Captain aware that I got that message, and that I was aware the flare pitched up a bit high. What appears to be a flat attitude in a commercial airliner means the nose is already pitched up.

The 6º pitch-up warning message is unique to the longer 300 series airplanes (versus the 100 series) in that the fuselage is longer. If you pitch the nose up beyond 8 degrees, you are at real risk of striking the tail on the runway. I didn’t get close to that, but this is what the message is for.

Damn! At least now I was including the message in my scan, recognizing it, and limiting my pitch-up at that point. I had been having some fun with the 100’s over the last several weeks holding the nose off a bit longer. Learning by watching, experiencing by doing. I knew this might mess me up with the 300’s, but it wasn’t too bad. I won’t dwell on it, but I will work on it.  Damn!

Next leg up to Lynchburg was the Captain’s leg. We were in light rain and low clouds that got lower still in that area. Beautiful IMC work among rocky terrain. It started to drizzle more steadily as I did my walk around in Lynchburg, and we launched after a quick-turn. My leg back to Charlotte was IMC outbound until we climbed to a smooth ride between layers. The cockpit was cool for a change, and I appreciated that. The landing in Charlotte would be via the ILS 36-Right approach.

Vectors to final and I clicked off the autopilot. I flew this one just like the last, including using the props to slow to 10 knots over VRef speeds at the threshold. The one difference was that I accepted the attitude I arrived at as being high enough, and resisted the urge to flare any further. Instead, I just used the props to slow us down and lower us the last few inches to the runway. The urge to flare further is strong, and based on thousands of GA landings where this is an appropriate procedure. I didn’t do it this time, and the landing was another greaser but with no message this time.

The Captain flew us to our overnight in Hilton Head, where visual day conditions prevailed. He chose a 35 degree flap landing on runway 3, and made a nice touchdown in gusting conditions. Since I had gotten up at 3:15 am to make this trip, I decided to eat the food I brought and just hang out in my room to read a bit. I’ll try to get out to the beach tomorrow, when we come back here by early afternoon. I was asleep around 8pm and only woke up once during the night.

Day two out of Hilton Head on runway 3 was the Captain’s again. I was up at 3am and got all packed up. No breakfast available here this early, so I ate the instant oatmeal I brought with me. I have a thing about the hotel coffee pots not being clean enough, so I’d do without until we hit Charlotte.  I really could have slept another few hours.

We took off in the dark at 5 am, flying north along the coast. Our ride was dark but in the clear. Lightning could be seen offshore to our east. The landing in Charlotte was to an instrument approach to the center runway to the north – runway 36 center again. Low overcast clouds and drizzle prevailed. Not much in the way of ramp traffic, so we got to the gate in no time. I finished up my work to close out the flight, and jetted out to Starbucks before the passengers could even disembark.

Back to the airplane with bold coffee in hand, it was my leg to Roanoke. We both reviewed the weather and NOTAMs in the flight release, and talked about the likely and available approaches. We also discussed which approach would get us closest to the ground and under the weather. I briefed my takeoff, departure, and anticipated arrival strategies with the Captain before we called for push-back. We always do this, but there are rocks on the approach into Roanoke, so I paid more attention to the process.

The flight up was through overcast layers with a relatively smooth ride. Going into Roanoke we are assigned the LDA Y 6. LDA approaches are the same as an Instrument Landing System approach (an ILS), only the localizer guidance is offset from the runway centerline. Vertical guidance is still included, and this approach had the lowest approach minimums available to us. Good deal.

I briefed the approach and we headed on in. To review, my first landing had the pitch warning message we don’t like to see, but my second was spot on. During this third landing, I started slowing to 10 knots over ref speed at about 500′ above my decision altitude – exactly what I should be doing.  At this point the Captain decides to give me additional input in the form of a dialog – attempting to change how I’m doing things in the middle of my doing them.  His suggestions were fine – a solid alternative – but what I was doing was also fine. In any event – my workload went up a bit on the way in. He is a training Captain and knows what I’m working on, so he was being helpful. My point in this is to give you perspective that this is a dynamic environment. There are usually a variety of tasks and inputs that need to be processed even in the middle of a simple approach.

His suggestion was not to use the props to slow down while still at 500′, even if you are fast. Instead, he suggested I have more patience and just hold 25 % torque on each side all the way to the final flare, allowing the speed to bleed off on it’s own. Over the threshold and just above the runway, I could use the props to slow down and lower the mains in a consistent pitch attitude. This method is not much different, but may provide additional consistency. The landing was another good one with no message, so I’ll take it.

Clouds in Roanoke were literally drifting across the field and hanging out among the surrounding hills. 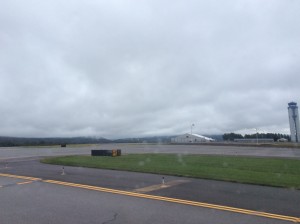 The Captain flew us back to Charlotte for yet another instrument approach to 36-Right this time.

Then it was my leg from Charlotte down to Hilton Head. The Captain and I talked about fuel, holding, and options before I called for pushback. I picked his brains about strategies I might use as a Captain, when that day comes too.

This would be cool, since the localizer there is out of service and the overcast layer is forecast at 800′. The only instrument approach available to us is the VOR-DME A off of the Savannah VOR.  That one will only get us down to 781′, so a missed approach and diversion is a real possibility. If we do get in, it will be via a circling approach to a relatively short runway. This could be sporty!

On the way south, weather was reported to actually be 800′.  I asked how old the report was, and it turned out not to have been updated in a few hours. We continued on with the same plan for the moment, and 20 minutes from the field the weather was finally updated. Ceilings improved to 1000′ overcast, so our getting in was more assured. Beaufort Approach vectored us for an intercept on the final approach coarse on the DME-A approach.

Our intercept with the final approach course was fairly close in. I had to initiate a descent quickly – dive down/drive forward – to ensure I’d get low enough to pick up the runway early enough.  About 5 miles out we were under the overcast, and maybe 3 miles out I saw the airport. Left base to runway 3, I started my turn and called for flaps 35.

My landing also went very well with small gusts and a crosswind, so I admit that I had some fun with it.  Arriving at the hotel before 1pm, I headed right out the the beach for a swim in the Ocean to cap off the day. I like to do that at least once per year, and was running out of time to get it done.  The water was clear and clean – and the conditions perfect. The walk to the beach was only 1/2 mile at best, so I was back to my room around 3:30.  Dinner with the Captain and then back to the room for another early out on the last day of the trip.

Hilton Head to Charlotte was my leg and another approach. The Captain got us home to Salisbury before noon. I very much enjoyed getting to fly 5 instrument approaches over the last 3 days – with 4 of them being in the longer 300 series Dashes. I’ve been doing a number of 100 series trips lately, so getting back into the longer airplanes would keep me sharp.