AutoPilot Update: Larry & Matt went out of their way to help me with an autopilot issue I was having with my beautiful twin comanche. Larry gave me his expert friend’s number down in South Carolina, and then followed through with the introduction – Jerry was his name. Matt dropped what he was doing to go flying with me to execute a flight test plan Jerry had laid out for me.

On May 19th, we flew the airplane and determined that the pitch trim servo had gone bad. See the previous post for an idea of how that might have been determined.

Back on the ground at Georgetown, Matt offered to dig into this as soon as we returned. He dropped what he was doing to help me, and once we determined that doing so would definitely ground the airplane, suggested I fly us over to Easton before we removed it. That would allow the airplane to be in a hangar while we waited for the servo to be overhauled. We did that, and I drove us back to Georgetown in my truck in the late afternoon. He gave me his day and made it possible to get the airplane squawk free again before Oshkosh.

I learned allot, and inquired about his interest in an owner assisted annual. He would like to do that, so it looks like I’ll be learning more about that in September. In the meantime, I am very appreciative of Jerry, Larry, and Matt for stepping up to help me on this when they are all busy professional people. Very cool.

The pitch trip servo has gone out to Autopilot Central, and I’ve been told that there will be a 3 week turn-around for that. That time was subsequently increased to 4 weeks. Our Florida vacation is during the second week of July, so the airplane may or may not be available. Oshkosh is two weeks hence, and I’m hoping to be ready for that. I refuse to stress about what i cannot control, so we’ll see how it all plays out.

Proficiency is coming into play now too. Last year I logged the highest number of hours in my flying career, naturally.  This year will be among the lowest. If I don’t get any time to practice before Florida, I will have no trouble driving along with the grandkids who are heading down with us – Chris and Raquel’s family.

Last Weeks Trip to New Orlean’s: Bev & I got back from a great New Orleans trip 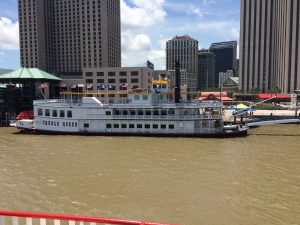 with Ted & Linda just a week ago – around 1 am on Friday last. We ate and drank our way from one end of the city to the other. Checked out the WWII museum where we were given a personal tour of a PT Boat restoration; walked down Bourbon Street and Frenchmen Street a few times; took an airboat tour of the Bayou and a Steamboat trip up the mighty Mississippi river.  Took an incredibly peaceful streetcar ride down Canal Street to see the flood damage, and another down Saint Charles where we stopped to have a drink at each appealing bar we found.

The girls and Ted enjoyed shopping, and I enjoyed wondering around with them and checking things out – I don’t shop much.  Beignets and Cafe au Lait at the Cafe du Monde was amazing. Vacation allows me to think it might be a good idea to eat three fried donuts and coffee for breakfast, and be ok with that. Oh well – we all enjoyed that.

This was a great trip with friends. We walked everyday is mild heat, and Beverly had no ill effects from the exercise. In fact, we had no health concerns at all until we go off the airplane and noticed subtle sore throats in both of us.

Here comes the flu: Both of us came down with the flu right after we got home, and spent the next several days quarantined in Smyrna dealing with it. Bev was about a day ahead of me in symptoms, and recovered more quickly. The timing for all this inconvenience was incredibly GOOD in that we were able to enjoy our trip, and I was able to recover before an upcoming B-25 trip.

Since I do mean to fly for a week in a very loud airplane starting tomorrow, I decided to get my asthma doctor involved on Wednesday to build a support plan. He is strongly against anti-biotics unless absolutely necessary, even though my history showed them necessary and effective in my asthma and allergy management. He suggested a compromise, and wrote me a script to hold onto in case I hadn’t recovered by Saturday. I would only fill it if recovery wasn’t imminent by then.

While I had quite a bit of pain throughout the week that I think could have been mitigated with medication, it is Saturday morning and the congestion I still have is abating. I do not plan to fill the prescription, as I had promised. I’ll be flyable by tomorrow night.

Missed Opportunity: Had I not had the flu last week, I would have been able to reposition crews using Larry’s PA30 to work around weather driven schedule changes. That is a part of my value proposition for them,  and would have been a way for me to pay a little back to Larry and the DAMF. Damn sin I wasn’t ready, but I made the right call and admitted illness immediately.

While it would have been a very short flight in a familiar but different airplane, an inadvertent IFR encounter with all that sinus would have made me work way too hard. I would have looked squirrelly as a pilot, and that is the last impression I want to leave behind. I very much want to be there when they call, but professionalism comes first in this environment. Damn – easy call to make, but regret having to do it.

Naval Pilot’s Test Center: Tomorrow through next Friday I am scheduled to fly the B-25 as a required crew member at the Naval Pilot’s Test center. This will be my first trip since getting the type rating before the New Orleans trip. Apparently, those professional aviators are given the opportunity to fly the B-25 through it’s paces as part of their overall training. I will get to log SIC time and will have an active role in the safety of the flight while we are there. I suspect I’ll get actual right seat time on the way over and back as well.

The opportunity to fly the B-25, and by extension to be playing a very small part in the education of these naval aviators, would never have been believable items on my bucket list. I have exceeded every goal I ever set out to do. I am blessed to be in uncharted territory taking every new experience as it comes.

In preparation for the trip, Calvin briefed me about my role over the phone a few days ago. I’m excited to be going there tomorrow, and ready to learn practical B-25 flying by firehose; just like in the Dash.

Consulting Update: The last thing I will memorialize is the continuously developing work opportunities that are coming in. I was asked to do a two week gig in New Zealand this July, but turned it down to accommodate the two vacations already scheduled. In addition, it looks like there is a significant amount of SCADA work to be done along the east coast for another consultant company, and they’d be interested in getting me engaged there as of January.  All this promise, but nothing really gaining tangible traction yet.

Proficiency too:  My good friend Jim down in Atlanta is flying the paint off his beautiful PA30 so that he can become a professional pilot. He is getting closer to the requirements every week. I recognize that my own IFR flying dropped off with this years drama, but I see that as an opportunity. Two new projects will fill some of my time this year.

In August/September I will participate in my own aircraft annual for the first time. Maybe that will inspire me to get my A&P as a project, and take me in a new direction. No sure of that one – it would be a radical change.

After that project, I will get myself an IPC, BFR, and some serious IFR work to regain currency and proficiency. Of course I’ll reengage my simulator to make it a fun resurgence, all celebrated with a series of Angel Flights to cap it off.

Appreciation: I expect good things to continue developing. My friends continually look out for me, and it is that network that drives all this opportunity. I will work hard to be worthy of all this good fortune.

I also appreciate all the doctors and medical professionals supporting my family. Their profession is not an easy one.