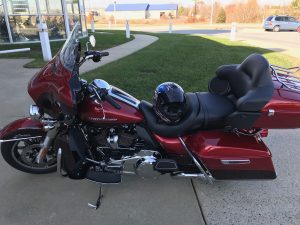 I replaced my 2001 Honda Goldwing with a brand new 2018 Harley Ultra Limited. This is my first Harley and I surprised myself deciding to buy it. It was time to update my ride and I was drawn to the V-Twin experience. It has built in heated seats; modern electronics; and a modern engine. Can’t wait to get Beverly out on it!

Aviation: I haven’t flown an actual airplane since October, 2016, and N833DF is still out of service.  It is my responsibility to get this project over with, so I’ll work with Matt this year to make that happen. If he can’t get it done, I will be forced to work with him to pull other resources in, or pack it up and move it somehow.

N833DF Update: Matt is supposed to be making the parts we need to replace the cracked members in the landing gear box, and putting the left wing back together first. Most of the other items found during the annual have already been addressed – but it’s been a year since they were completed and nothing has been tested. The overhauled KX-155, for example, has never been turned on and is now out of warranty.

For now – he has made a new commitment to work on it three days a week until it is completed. I really hope that happens, and I can get it flying and up in a new hangar at KILG where I work. Holy [email protected]#! would that be just the absolute best.

2017 in Review For my part, there has been allot to keep me busy since my airplane became unavailable. I didn’t push very hard, and even put a positive spin on the the event. If it was going to happen – then NOW was the best time for all this drama to surface.

In November of 2016, I was scheduled to begin a new career with FlightSafety as an Instructor. Bev suddenly needed unplanned surgery over the coming weeks, and life had suddenly gotten busy as the Thanksgiving holiday neared. The word turmoil could have been used to describe the level of activity, but the negative connotation doesn’t really fit the situation. We were addressing these unplanned opportunities as they came, and I worked with FlightSafety to defer my start date until some of it settled down. My priorities were clear.

I used the additional time to enjoy the same stomach bug everyone was passing around at the time for a week or two, and finally recovered in time to spend Thanksgiving in the hospital with Bev. Leigh-Ann and Scot brought in all the fixin’s for Thanksgiving and we gathered together right there in the Hospital that day. (Writing these blogs is a good way to remember how fortunate I am.)

January through June was spent learning all the background knowledge you need to be able to fly and instruct in corporate jet aircraft. I went through initial and recurrent training as a client; flew the simulator; and then proceeded through various practice sessions until I was cleared to instruct in the Westwind classroom and simulator.

June, July, and August: Selling and buying homes consumed a major chunk of our summer. Sometime prior to that, Bev and I floated the idea of selling both of our homes and finding someplace along the water – somewhere. Much of my free time this summer went into preparing both homes to be put on the market, and spending time looking for a new place to live.

When we found our new home in Chesapeake City, MD, we decided to make an offer before listing either of the other homes. It was risky, but this house was right along the canal and we didn’t want to lose it. Our offer was accepted, so we listed both of our existing homes.  Within 25 days we had both of them sold, and closed all the settlements in August.

The point is – my mind was kept off of the fact that my airplane sat languishing in a hangar in Georgetown.

New guys come and go: Our first FlightSafety new guy after me came to the Westwind during the summer months. He had airline experience that I certainly respected, and I was ready to see him spin up fast in our program.  It wasn’t to be, as it turned out. Until you get comfortable, the Westwind might best be hand flown during single engine approach and go-around scenarios. Expecting the automation to get you through is not a sound approach. As it was, a roll-over due to fuel imbalance closed the deal for this guy. He walked away on his own.  I was disappointed.

The next guy in line I’ve already spoken about. Mike J is a high energy experienced King Air Instructor, and I’m going to learn allot from him. He is professional and easy-going. Mike should be cleared to instruct Westwind this spring, and Astra after that. I am looking forward to working with him to improve the instructional material for both programs, which will make it easier for those that follow.

Hangars:  Cruel irony. Sometime in the first half of the year – the new hangars were completed in Georgetown, and I got a beautiful one. I kept it until August, when I realized that my airplane wasn’t coming back anytime soon. Letting that beautiful hangar go was a very difficult decision to make.  I like Georgetown and the people there, and really wanted my airplane in a pristine hangar. Now I don’t live there any longer.

It pays to have friends and contacts though. I have a hangar waiting for me at KILG when my airplane gets done. It is more expensive, but will be worth it. I can’t wait to leave work on a spring afternoon, and drive around the other side of the airport to pull my airplane out and go flying. The hangar there is in great shape, and positioned nicely on the airport. I just have to get my airplane there.

August Astra Training: Training for the second jet type rating also began in August, 2017. The Astra is very similar to the Westwind jet, so it isn’t difficult to fly the thing. I ham-fisted my steep turns the first few times, but Lloyd leaned forward and told me to slow down my roll in. That seemed to do the trick and I have that rating now.

In September, I began building SIC time in the Astra while continuing to instruct in the Westwind. The schedules weren’t too bad and I was enjoying the work.

I missed N833DF, and bugged Matt now and again. Lots of promises and false starts kept it frustrating. I remained hopeful.

August / September New House Preparations: I was running several projects at our new house in the midst of all this, including one failed one for a new driveway. The town got involved and stalled our contractor when he missed a key permit. I spent considerable time dealing with politicians and watching a contractor attempt half-assed solutions to try keeping the simple project afloat. I fired him after several weeks, and had to deal with allot of non-sense for awhile.

My kids save my ass though, when Scot activated DDR construction.  I had a new driveway two days later. With that finally complete, I brought in a landscaper to repair all the damage from the first contractor, and we are all good now.

October Key West Vacation We had planned to meet Ted & Linda and Scot & Anita down in Key West for vacation in October. Scot & Anita couldn’t make it due to family commitments. They have older parents, like Bev & I do, and were unable to join us. Ted & Linda kept us moving the entire week, and Bev & I very much enjoyed the break in our action.

November/December were largely Westwind instruction and some in-house training.  Mid-December saw the focus shift to Astra again,  in preparation for my becoming an active instructor in that airplane.

Merry Christmas came along with both of my inlaws in the hospital with pneumonia and related illnesses. Beverly is an Angel, and I’m getting into Heaven on buddy points – I know that. We brought her parents home with us to our new house, which is uniquely suited to care for them. I hope they stay with us long term now, but we’ll have to see how it goes when they are both feeling better and home from the hospital.

January 2018: Schedules absolutely suck this month. Mine does, anyway. I have a bit of an attitude.

I just completed my first supervised ground instruction for the Astra, and most absolutely wasn’t ready. Everyone tells me I am doing great, and have plenty of knowledge. Non-sense. There should be more time for me to read, practice, and prepare. I must be able to add enough depth to all of the subjects that are specific to Astra, before I stand in front of a client.  Oh well – the guys in my class were recurrent experts, and some of the best pilots I’ve seen yet.

I’m teaching a Westwind Recurrent later this week, and then it’s on to my first Astra Initial Sim instruction next week.  I’m admittedly hacked off with the sudden urgency to get me up and running on the Astra, while simultaneously training me to instruct 135 Charter pilots and become a center evaluator. Doesn’t seem to be a whole lot of long term planning going on, as I see it.

2018: I filed FSI paperwork to be cleared to fly these jets as a contract pilot while continuing to work for FSI. In order to keep this interesting for me and to seriously boost my motivation, I want to get some time in them. I don’t want a real job, mind you, but I do want to get a few trips in either the Westwind or an Astra jet. I haven’t heard back from FSI yet – but won’t let this go. Opportunities are out there.

My FSI contract obligation is to pay back the first type rating if I leave within 2 years. That is up in December, 2018. By then I’ll have two type ratings and will be in a position to be flying contract every now and again. I could also work part-time at FSI and take a part time flying job. Who knows what is next?

Westwind/Astra will be getting a new program manager and assistant program manager this year. The changing schedules and personalities might make all the decisions for me.

Once my airplane gets back I’ll have a major project going for me. Getting re-familiarized with it and retrained  in flying it professionally will be a major focus. That might be enough to keep me motivated in and of itself.