My buddy Jeff came into town the other day, and 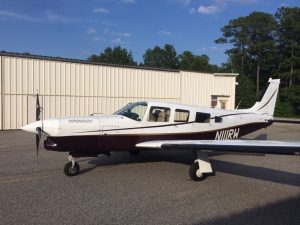 we took the opportunity to go fly together in his Saratoga. This day was all about having some fun while we expand our personal flying envelop in a nicely equipped airplane. Might as well accomplish his flight review while we’re at it.

Jeff is from central Michigan, and we had flown together while he was training for his instrument rating. That was in his Archer some years back, while we were both based at 33N – Delaware Airpark. Jeff and I have also flown in trail going into Oshkosh on another excellent adventure.

This time Jeff flew had flown his family into KLNS-Lancaster to visit his family. He had reached out ahead to schedule a flight review, and I had prepared myself for that task.  I asked him to fly down to Wilmington and meet me there for the review. I had been tempted to ride the Harley up to Lancaster, but with the parental care we’ve been doing here at home, I never quite know what my morning is going to be like ahead of time.

Actual Engine Out: Jeff and I have a number of mutual friends. One of them, Gary, recently upgraded his airplane to a Debonair from a Musketeer. That is a big change, but Gary must have done it the right way – since he was prepared when he needed to be.

On his very first cross country outing with his wife in the new airplane, Gary and Mary watched the prop spool down due to a catastrophic engine failure. Climbing through 700′, his engine packed it in and left him with little time and fewer options. What followed was a hard landing on a golf course, and two injured friends of ours. Mary was helped out of the airplane by witnesses and is at home recovering. Gary wasn’t as fortunate, and will take more time and surgeries to get back on his feet. The new shoulder harnesses hadn’t been installed yet, and probably would have prevented his facial injuries at least. The airplane is a total loss.

So that was on our minds today; training for that same scenario in a heavy single engine airplane.  Jeff is a safe and proficient pilot who uses his airplane to travel with his family. He is current in everything but night landings, so the flight review can be done in one session. We’ll focus on getting a feel for the flight characteristics in a variety of configurations, and working on the type of landings and takeoffs that he doesn’t normally do.

The Saratoga, N111RW, is a heavier single engine piper that burns about 20gph and flies about 160 kts. The fuselage is longer than an archer and can carry a bunch more weight, but the landings and handling is similar when power is available. Take away that power and it has the glide slope of a piano.

Jeff and I practiced several engine outs in a variety of configurations, fine tuning the procedures to observe sink rates and timing for getting the gear and flaps out in the pattern and on approach. Landings with zero and partial flaps were also conducted, to ensure he was comfortable in all configurations.

Stalls and steep turns were also on the agenda, and I made sure to have Jeff manage the engine as he saw fit. The flight review was satisfactorily completed, and now Jeff has some things he can work on when he gets home.

Always good to catch up with friends, and Jeff is looking good and enjoying life.