I’m feeling much better about things this dreary winter, with my two languishing projects behind me. Last year with the airplane and deck projects both struggling, I’d about had it with project work. Thank God those projects both came to a successful conclusion, and I can focus on other things in 2019.

Note: I added a YouTube link to the video of this flight you can see here==> https://youtu.be/Msvl3FdqnhM. I’m playing with Wondershare Filmora 9.0 today as a means for documenting the return to flight of N833DF.  Actually – it’s just another way of keeping my idle hands busy during the winter season…..

Test Flight #5 is going to happen today. The overnight temps were in the high 20’s, and by the time I made it to the airport around 9am, we had just inched over the freezing mark. I don’t like starting the engines below 20, and with a cylinder just replaced, wanted a margin above that before I’d go. I was torn between waiting for the pre-heat system I’d purchased, and wanting to reach 15 hours of run time so I could close out the project with Matt. 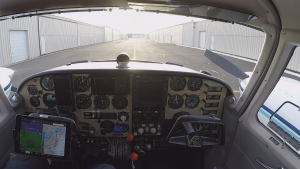 Ceilings were slightly higher than 3000′ for most of the way down the peninsula. Conditions were forecast to improve slightly, so I was comfortable I’d be able to get down to Williamsburg and back with no trouble.

Starting the left engine first, as I’d been doing, allowed me to practice my starting process for todays conditions on the good engine, so I can minimize the impact on that new cylinder on the right. The first thing I noticed is that the binding on the left mixture lever is a genuine squawk. To open the mixture, I’d have to hold considerable pressure and let the cable slip through the bind to catch up. I did this in stages until I was sure it was as open as it would get. This cable will be replaced at the first oil change after Matt does the 15 hours. Matt isn’t interested in doing this work, and I understand that. I’ll have Paul Phillips at 33N do that at a 25 hour oil change after Matt, and start looking at how to improve my engine monitoring while I’m there. I’ll replace the cable before that if I need to.

My oil change schedule will return to every 50 hours after the 15 hour and then 25 hour changes and inspections are completed. By that time, the IFR recertification and the paint repairs should be wrapped up.

Angel Flights will start, assuming there are no outstanding squawks of any significance, at the 50 hour mark. Bev and I won’t travel much until the senior situation stabilizes, but I’ll start taking longer IFR cross country trips for lunch and maybe motorcycle excursions…..

The AutoPilot works! I hadn’t read my own notes, and was using it incorrectly. The autopilot is working fine, other than a wing wobble you get from time to time. I am expecting that wobble to settle out with use, since the radios and other devices seem to be getting their act together in the same way. It used to be that the first leg of the day you’d see a wobble, and then it would disappear as things warmed up.

You can see the process I should have followed by clicking on the preceding link. I had written that back in December, in anticipation of flying the test flight back then. Instead of taking the time to read the process I’d written, I tried to test the autopilot while still closely monitoring the engines and other systems. The rust keeps coming off in buckets, and I’d forgotten an awful lot of the finer details.

I had more time today and followed an older checklist I’d written; not realizing my latest one was actually a blog. Once I pushed the buttons correctly for the autopilot implementation, the thing came alive. That was exciting!!  As frustrating as working through this project has been, you absolutely have to respect the talent Matt has in working on all these systems. I do.

Mystery Vibration: I’m keeping my eye on a vibration that comes and goes. It doesn’t seem to be affected by RPM or MP. Reducing power to idle leads me to believe it is coming from the left side, so naturally I’m concerned I have a cylinder doing what that one bad one on the right was doing. We’ll be checking compressions at the 15 hour mark to try and catch that, but in the meantime, I’m just watching it.

Both engines sound solid and strong on takeoff and there is no apparent difference in output at cruise. Indications are different left to right, but I suspect that the left mixture cable has something to do with that. I can damn near match them up with dissimilar mixture lever settings.

It’d be nice to positively identify an ailing cylinder and replace it. I’d rather know what it is and get it smooth again than have something unknown to manage. More monitoring would be nice.

The flight went smoothly and I put 2.7 hours on the engines. Decided against coffee and just landed and departed. Important to count gear cycles as well as flight hours. After the flight home, there is only 7 hours to go before I fly down to Georgetown for one last check and oil change.

The IFR cert in Lancaster will be on the 28th, so I plan to file IFR on the way home from there. Hopefully – the weather will permit that and it will be one more thing done. The next few test flights should include practice approaches performed in VFR conditions for an equipment check of my own.

Hangar Improvements: I took a snow shovel to the hangar and stopped at Lowes on the way. Purchased a new trash can, fire extinguisher, and a few other amenities for the hangar. I’ll bring a few bag chairs over there too for those spring and summer hang-outs I am looking forward to. Life is good and getting better still! Already met one neighbor with a Single Comanche – Jim. He used to own a PA-30 and came right down.

The next post will be to cover the pre-heat system I purchased. It’s installed and running, and I’ve checked on it three times. No flying today, but I’ll be over there monitoring how it’s doing later today.