In early April I needed to fly my airplane up for autopilot work. It would be there for a week or so, and then I’d have to go get it and bring it home. The paint shop was scheduled for the end of the month, and the two things together would mark the end of the restoration project. N833DF would be whole again.

The logistics of moving the airplane around on top of work and home schedules turned out to be a real challenge. Kelly helped me out with the first move. She is an FSI work buddy who flew up to Lancaster to bring me home in her nicely equipped Cessna 150. It really is nice. She got a chance to be reminded what adding a 230# lump to the right seat does to a small airplane, and I got to enjoy a low and slow ride home. I really did enjoy it; particularly the landing in gusting winds. Kelly does a nice job and really helped me out getting this project moving. Thanks! I went to work on the other side of the field, right after she got me back home.

That same day the paint shop called and said they were ready for my airplane a month earlier than planned. I explained where it was and that I’d get it to them as soon as the autopilot shop work was complete. Kendall Horst is the owner/operator of Lancaster Aero (the paint shop), and gave me the flexibility I needed. No pressure.

Lancaster Avionics is doing the autopilot work, and they called about a week later to say that the airplane was ready. For this trip I could drive myself up for the test flight; move the airplane to Smoketown, and just UBER back to get my car. That was the plan, anyway. So much easier when you can just do it yourself.

It was my birthday on April 2nd, and I drove up to do the test flight. The technician and I set out to fly a typical flight pattern he laid out to ensure all of the features of the autopilot system were working. At initial startup, it was obvious that the pitch trim wheel didn’t pass a pre-flight test. No response at all. Sucks to be me – I’d be coming up here again I think.

The technician, I think his name was Steve, was very professional and safety conscious. I could tell he was knowledgable and appreciated his CRM, even though he wasn’t a pilot.

We went flying even with the pre-flight failure of pitch trim. In the process, discovering that the rest of the system was working great. Lateral and vertical guidance was available in both level flight and approach mode and without the issues I’d reported. Nice!  No wing rocking and much tighter glide slope tracking.

I wondered why he couldn’t bench test determine the pitch trim wheel wasn’t working, but didn’t pursue the issue further. At this point, the altitude select wasn’t available, nor was the ability to control pitch directly with the wheel. The work the shop had done was evident in the improved performance, but I was disappointed that more work would be needed. The cost is less important at the moment than the logistical challenges of moving myself and my airplane around.

Back at the Lancaster Avionics shop, we called Autopilot Central to see if they could service the control head. If not – I had 90% of the functionality of the system already, so that was something. It turns out that the issues with my 1967 autopilot would be addressable, so I left it behind for the shop to ship it out. The unit is still out there now, but has been waiting to be looked at for almost a month. I’m looking forward to getting it back!

With a hole in my panel now, I left for the paint shop around 11am. Flying the airplane about 5 nm away to Smoketown, I made a long landing with a tailwind on rwy 28 there. I avoid landing east since it is over an obstacle and downhill on a 2700′ strip. No thanks.

I met with Kendall there and he assured me he’d have N833DF in the hangar shortly after I left. I reviewed one more time what needed to be done. Very exciting to be making progress like this before the summer fully arrived.

My sister Sue offered to take me to lunch for my birthday, and I had her meet me at Smoketown. Conveniently we had a great lunch at Lancaster Airport, so I could grab my car when we were done. I had a wonderful birthday lunch and managed through more of the travel logistics. The drive home was peaceful, and the wife had even arranged coverage for mom so we could go to dinner.

Later in the week the paint shop called and told me that the repairs were complete. I talked with several airplane friends to arrange a flight up there to pick it up, but schedules weren’t coming together. Home life is still crazy, so my wife couldn’t drive me up. We are still trapped in our own home taking care of her mom. That means I had to reach out and inconvenience friends to get the job done. Simple tasks that should be easy to accomplish become a monumental effort. Frustrating.

I have a neighbor – Tom – who has been very nice in helping me out a few times. He is willing to jump in the car to drive me where I need to go, so I ended up reaching out to him. Three hours of round trip driving is allot to ask, but I was out of options. He is not only helping me, but helping Beverly by keeping her out of the logistics.

The airplane is home now and in the hangar. Then I got myself pretty sick.  High levels of pollen were evident at the start of all this, when the trees suddenly exploded to life all around us. One thing lead to another, and I developed laryngitis and a serious sinus infection by last Saturday. I was miserable and in pain. Antibiotics were prescribed and life improved since I started that regimen, but suddenly reacted to those with some unpleasant side effects I won’t go into here. I’ll survive a few more weeks and pray for several heavy rain storms to knock it all down.

N833DF is coming along, and so am I. Feeling a little better – allot better actually – but not entirely out of the woods on the allergy thing.  I went flying just yesterday morning and did pretty well holding heading and altitude without the autopilot. I’m still waiting to hear from AutoPilot Central on my repairs. I’m anxious to close that chapter. 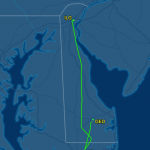 I was scheduled to work beginning around noon, so I pulled the airplane out of the hangar and flew it south early in the morning. There are so many other things I should have been thinking about, like organizing my tools; cleaning the basement; installing deck lights; and even organizing my hangar. I’ve been feeling terrible though, so going flying was what I needed.

Lots of wind today, but I’m not worried about it. I’ve pretty much returned to fighting trim in basic airplane handling for the PA30 on the first day I returned to flying it. If you’d followed this blog, you know that I flew in challenging conditions from the first test flight.

The choreography involved with configuring the airplane during the various phases of flight is what I seem to have lost. It is improving, but my ability to stay ahead of the airplane and configure for the next phase of flight smoothly, without thinking about it, is a work in progress.

In this airplane, you have to get a rhythm and flow to your process to get the aircraft properly configured from takeoff through approach through touchdown without working too hard.

Lots going on, so there is plenty of content to write about. I’ll get to it later this week or next.