Returning from vacation, the most pressing issue on my mind was mulling over my options and deciding what to do with my current avocation. Read the previous blog if you don’t recall which options I had developed for myself, but I was forecasting a sea change in direction. The week itself ended up being incredibly productive and relaxing for me.

Memorial Day Monday came and I had arrived at the conclusion that I would be backing out of the G280 program. I decided that being away from home for three entire months – 4 weeks away at a time – was more than I thought I should or could endure. I figured that by the start of the second month away, I’d get tired of being away and become home sick or just sick of being in a hotel. My wife carries a considerable burden with her Mom, and while she assures me that she has this and I needn’t worry, I’d like being around to help. Finally – I have some wonderful toys and don’t want to have them sitting up here while I’m aging down there.

I would like a better balance that will keep me happy and productive. I planned to work towards that by talking with the new program manager (Mike) the existing PM (Scott). I emailed Scott about a number of scheduling issues first, and added a note that I’d be talking about a change with Mike the very next day. I promised to update him on the outcome of that discussion. Then I scheduled a meeting with Mike for the following day.

Now that I’d signaled my intent to both of them, It was a beautiful Monday and I intended to get out there and enjoy it. Building on all the walking I’d just done on vacation, it was time to get the bicycle back on the trail and try to burn off a few calories. My weight has been creeping up, and I gave back all the ground I’d gained last fall. Bicycling is my current favorite form of exercise.

The first few miles on my Cannondale were difficult. I could feel muscle soreness but pressed on through it. I managed my ego and my pace by letting other cyclists pass by without trying to match their speed. I surprised myself by making it over the hills and all the way to the Grain H20 Restaurant and Bar. It was too early for a beer or two (they weren’t open), so I’ll look forward to coming back on another day for those. Hell of an exercise plan, really, and I’m looking forward to the next visit. I headed home and was reminded that the wind can make it so much easier when it’s behind you, and a force to be reckoned with when it’s in your face. Felt good to get it done.

Tuesday morning had me up early, ready to resolve the G280 scheduling issue and then get my airplane out of the hangar. I was wide awake by 5 am, and decided to get myself moving early so I could used what remained of the day to squeeze another activity in there. I wasn’t sure what that might be, but I’m loving the warmer weather. 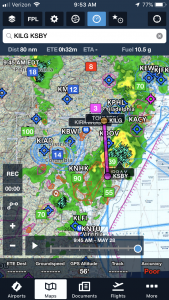 I checked in with a few friends to see if they were available to go fly, but didn’t get any takers. Tom B would like to have gone with me, but was working today. He did suggest that the storms coming in might hold me up anyway. These storms have been developing over the last few days, including significant lightning and strong downpours. I told him that I was aware of the new ones coming in, and had planned my flying day to start after they’d moved through. This was to be a fun flight to keep the engines lubed and experiment with the newly overhauled autopilot and FlightStream. Using my toys.

With the storms coming in, I left the Harley in the garage at home and drove in to see the G280 PM, Mike. I found him talking with Jenn in the hallway near his office and the three of us enjoyed a chat about vacation and bike riding. Jenn asked me when I was going away for training, and my response was that I’d update her after Mike and I talked. At that point, the conversation ended and Mike and I went to his office to talk about it.

When I told him my concerns were around the schedule. Beverly could manage Mom, and while that wasn’t going to be easy for her, she wasn’t the reason for my re-thinking my joining the G280 program. I emphasized that the concerns were mine. I simply thought I’d get discouraged being away so long, and just didn’t want to do it the way it was scheduled. At that point he pretty much told me that I had control of my schedule, and to tell him what I needed. I responded that I’d give him the entire month of August to get started and typed. Thereafter lets keep the time away to 2 weeks where we can, and 3 weeks where we must.

I highlighted the dates I thought were problem areas, and he promised so send me a new schedule. Mike told me ‘You are really gonna like this jet‘. That was the right thing to say to me at just the right time. So I surprised myself and didn’t change course. Instead I left for my hangar, so that I could go visit my friend Gary.

Gary met me at the FBO. We had touched base earlier when I was looking for a flying destination for the day, As luck would have it, he was available and could fly down to see his new Commander 112A. Gary was chomping at the bit to start flying it, but was having some challenges getting an instructor lined up that had experience in this particular type.

Before we went into the hangar, I decided to have the fuel truck top me off, and we supervised that process first. All 6 tanks were filled before we headed to the hangar on the west side of the field.

I didn’t take any pictures during the visit, and I regret that as I write this. It is a beautiful specimen with an updated panel that looks damn near exactly like mine. The airplane has two doors versus the one door design you see on Pipers. This was one feature Gary had been looking for. You can see plenty of pictures of the Commander and read about Gary’s journey on Gary’s Flight Journal. After reading his blog, I’m going to steal some of his techniques around embedded video and effective video editing. I like what he has done and he turns it around quickly.

Gary and I sat in his airplane and talked about avionics, life limited parts, long term engine management philosophies, and all things aviation. I am working hard to refine my maintenance and upgrade philosophy for my own airplane, and used Gary as a sounding board to vet various ideas. By the time we were ready to leave the hangar, the question of lunch arose. I was enjoying myself, and decided to do that. Life is short and I was enjoying myself. Today I’d spend my entire day playing with the airplane. I’m looking forward to getting a flight with him once he gets himself signed off. That will happen shortly. The process is underway as I write this in early June.

The flight home was excellent. I’m glad I left when I did. Big thunderstorms kicked up that dropped hail on my hangar a few hours after the doors were closed, and the last thing I need is to go through that again. People I work with had their cars damaged, so I know the actual threat was real. 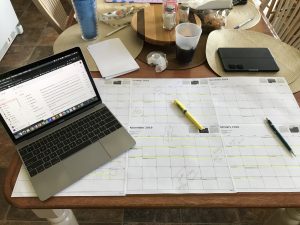 I closed up the hangar and checked my email. The G280 PM had sent me a new schedule after our discussion. I replied that I’d check it when I got home and had time to really consider it. Then I rode the Harley home and did just that.

The revised schedule came out much better than I’d hoped and has some unexpected potential benefits. After the first full month I spend down there getting typed, the shorter 2 or 3 week stints are spread out a bit. That means I may well be able to fly myself to DFW rather than commute. I’d get to use my airplane, have a little fun, and get around the lack of a hangar down there. I am more likely to leave my airplane outside down there for the shorter periods during the winter months. This might actually bump up the fun factor.

So I am staying in the G280 program. The Westwind is now officially retired, but I’m still current and available for contract flying. I’m instructing in the Astra and still working on getting my first contract flight in that, and will start studying G280 again this week.