Please Note: The events I describe may not all be in the correct order, and the details not exactly as described. That is what happens when time marches on and only memory is relied on. For example, there may have been only 3 attempts to have me evaluated as a TCE instead of 4. I did my best to be accurate.

My readers know I have been broadcasting my desire to fly up to Nova Scotia. I did not make the trip on the appointed day, and at this point have not rescheduled it either. I canceled the trip the night before I was to go. This after realizing I could not get back in the country at a convenient time. Admittedly, I was so busy that I only thought about it on the way home from work the day before the trip.

I screwed up by assuming the operational hours of customs here and not verifying any of this until the last minute. It turns out that Customs (CBP) at my home airport closes at 3:15 pm. That meant I needed to land somewhere closer to the border up north instead. I’d have to modify the trip to accommodate a customs stop other than home base, while could mean as much as 11 hours of flying in one day. All that to include a late return in weather.

I put an awful lot of pressure on myself to get this self-appointed goal accomplished. As it turned out, I wouldn’t have been able to go anyway. The ceilings and visibilities all along my route left me no options were I to have an emergency. The only higher ceilings available to me were west – toward an incoming front that promised thunderstorms. Those conditions were beyond my current capabilities in this airplane. Visibilities were very low along the route as well, which would have delayed departure until maybe noon. 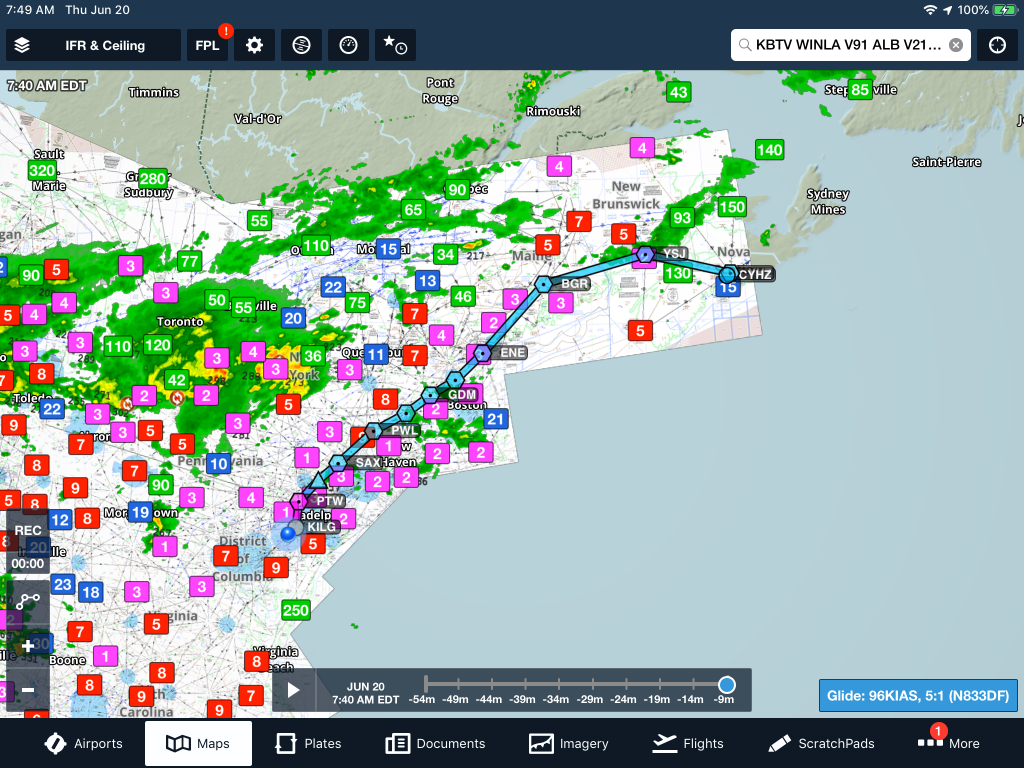 I’m glad I’ve done all the prep work and am still ready to go at this point. I’d like to go up and back at least once this year, even if just for the day. Achieve the goal, as it were. Exercise my retirement to the fullest.

Self induced stress can wear you down and come from a variety of sources. In my current situation, irregular schedules at work are making it impossible to get quality time off to do the Canada trip or anything social. I ended up reserving ONE DAY to get this done, and that ended up being a mistake. I’d already tried twice to get my props balanced before the trip (as a one day event), and had to cancel that twice because the day I’d picked there was rain. You can’t do prop balancing in the rain as the lasers used in the process bounce off of it.

Failure to accomplish the mission for a good reason doesn’t mean you feel good about it.

Two things are exacerbating my stress level. I love that word – exacerbating. Round the clock senior care in our home which I’ve already discussed, and this drive at work to make me an examiner using unreliable equipment.

Senior Care you’ve heard about already. Readers may know that my wife takes care of her Mom with the help and guidance of Home Hospice (awesome people). I won’t go into additional detail beyond this paragraph, since I’ve talked about all this before. We have been going through the process with both her Mom and Dad for the last two years. Her Dad passed away in February. Mom is declining slowly, requires constant care, and I don’t expect the process has much longer to play out. In the meantime, Bev and I have absolutely no social life. Scheduling even the most simple of appointments requires maddening coordination. Base level stress.

The history behind the attempts at making me a TCE began with the Westwind jet last year. As you may know, I’ve been working as an instructor in the Westwind / Astra program for the last 2 years. FlightSafety is trying hard to make me an examiner (Training Center Evaluator – TCE) before I leave for the G280 program in August. It would be advantageous to them to have me become an examiner now, and avoid having to build another 100 hours of experience in the new G280 before I get scheduled again. It is also easier to add the new jet rating to an existing TCE, I am told, rather than to do an initial check in a complicated jet. I get it.

About a year ago, I took the time to research what my first TCE book should look like. I built my initial Plan of Action for performing progressive checks in the Westwind that was based on the ATP PTS (Practical Test Standards). The book was evaluated internally before the FAA would see it, requiring several iterations to get it right. There were no good examples available for these older jets, since the experienced instructors knew the drill in their heads.  I, on the other hand, would be required to work from a TCE book. I get it.

Before I could be evaluated, I needed to accumulate 100 hours in the Westwind Simulator as quickly as possible, That meant being on the schedule more to make that happen. Ok, I’m in. Let’s get this done.

We are operating the two oldest simulators in the facility, so the plot gets complicated when they start showing their age. Reliability has been one of our biggest challenges, and it seems to be getting worse. Scheduled sessions become longer to accommodate maintenance delays. Some sessions are outright canceled. Long days turn into late nights. Time drags on and existing TCEs need the sim for their own recurrent checks.

I attainted the 100 hour SIM training experience in the Westwind and had my initial check-ride scheduled with the FAA. Reliability of the sim was on a slow decline, and one of the recurrent evaluations for an instructor was unsuccessful. He would required a recheck, and that meant that my own evaluation would be bumped. I was bumped again after that due to a maintenance issue, and then finally the simulator became so unreliable that it was retired. The drive for 100 hours; TCE book development; checkride preparation; and associated pre-checkride stress was all for naught.

But the Astra is still alive!  The focus shifts to getting me evaluated in that airplane, which again meant accumulating 100 hours in the Astra. They would like this done before I leave for the G280 program. It’s back to pushing the schedule and developing an entirely new book for a different jet, under a different set of standards. The Astra evaluation is scheduled for June 30th, precisely 2 days after the new ATP ACS (Airmen Certification Standards) goes into effect, replacing the ATP PTS (Practical Test Standards). Now I have to read the ACS and incorporate that into my book. Nice. I’ll be evaluated on an entirely new approach for the first time I ever give a checkride. Nice.

I will be evaluated as I give the checkride to an internal SIC who is familiar with the jet. We have one scheduled session together for his training, enabling us to practice what the ride might look like under the new ACS. I have other sessions scheduled with a new hire as well, that will also enable me to practice instructing and evaluating.

The scheduled sessions don’t go very well. The Astra simulator cannot seem to stay alive for an entire session without either have to land and reset it internally, or come off motion and get the techs involved. My first session with the new hire was terminated after the simulator died multiple times in the first 1/2 hour of motion. The first session with the SIC client was also terminated after hours of start / stop operation, dealing with multiple failures. We rescheduled the session for the next day and I reported the simulator as having a moderate maintenance issue. It had to be fixed before it was used again.

FSI maintenance is reactive, from my perspective. We don’t seem to do predictive maintenance at all. When something breaks we simply reset it rather than repair it. This is particularly true for the older simulators, for which there are few spare parts remaining. I don’t see any signs that anyone is trending how many times an instructor station is reset, or the same fix is applied repeatedly. I don’t think overall reliability is a key performance indicator they track.

The rescheduled second session with my SIC client was also terminated. He really needs to practice the maneuvers that have changed for the ACS, and I really need to vet the scenarios I developed and get some practice giving a ride. Neither of us can do that with a simulator failing this much. I stopped the session, notified my program manager, and marked the simulator down hard. I stated that it was not suited for use in training or checking anyone until it could survive an entire simulator session without failing.

The next day I found that the simulator maintenance issues were cleared, indicating it had been repaired. My SIC client was scheduled with someone else that day, and their session was terminated when the simulator failed repeatedly. At this point, I felt I was being set up for failure and complained at having the FAA evaluate me in this simulator. The process moves on, but the point is that all this was happening while I was trying to prepare for a supposedly relaxing trip to Canada.

On a good note, my new Astra TCE book looks really good. I’m starting to understand the process more deeply, and am better prepared for the ride. The workload is considerably increased having to work around the sim failures, however. Any one of these failures we’ve been seeing could or should stop the ride. The situation is ungood, as Lloyd would say.

In retrospect, I am trying to live a normal life in the midst of external influences on my schedule. Once the senior care is over and I’m back home with a new G280 rating, I’ll re-evaluate my schedule and determine if adjustments are needed. 2020 will be all about Quality of Life.

So – I didn’t go and feel just a little like I let myself down. I’ll get over it.