Skip to primary content
I’ve been experiencing vibration from my engines dating back to 2015, just before the long downtime to deal with the gear bulkhead issue. I first became aware of it when the GoPro that was suspended from the ceiling could no longer filter out the movement, and video quality suffered. The problem is still there since the aircraft has returned to service, and I want it gone. The aircraft is too nice to put up with this nonsense, and I believe the engines are talking to me. I need to listen.
Trouble is, I’m getting advice from Paul (my current A&P) to not do anything. He believes that the engines should be run to TBO, and only replaced on condition. Additionally, he fells that the vibration I’m feeling is normal and I should not be concerned. Paul is not alone, and is in fact, among the majority. I have about 550 hours remaining to TBO, and most think I should just truck on until a problem surfaces. These engines that were overhauled in 1991, however, and that was 28 years ago!
I believer that Matt, my previous A&P,  would be most comfortable overhauling or replacing the engines now. He has said that the cylinder we replaced on the right engine is indicative of the wear that most likely exists on the other cylinders as well. That particular cylinder was cracked, and had significantly worn valve guides. Matt found all that on the return to service in December, which caused a months further delay on that project. He has a valid point.
Moving forward: The airplane is flying again now, and the current plan is actually a compromise. I am ready to overhaul them both, but I don’t want to waste money either. I listened to the prevailing opinions, but decided to hedge my bets and gather more data while I’m running the engines. The resources I’ve spoken to are all very confident and adamant in their opinions. Only the owner makes the decision though, and I am pretty confident that further action is required.
What that action will be is not clear, but a direction is forming. To find out more about what is going on inside of these engines, and to formulate a more effective action, I am taking the following steps:
Prop Balancing: I actually scheduled my prop balancing three times before I made it happen on the fourth attempt. I had been planning to use the Sensenich shop in Lancaster, and that was my first attempt. It rained that day, and you can’t do this work in the rain. Before I could reschedule, I struck up a conversation with long time Comanche advocate CJ Stumpf. She recommended using Mitch out at Gull Wing Aviation in Reedsville, PA. I scheduled him on the next two attempts. Both of those were also canceled due to rain, but I didn’t give up. 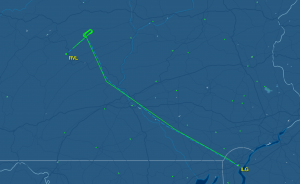 On July 9th, I went to the airport and prepared for the short flight to Reedsville, PA from my home base at KILG – Wilmington, Delaware.  It had been raining for days and weeks prior so there was moisture available in the region.
The weather forecast called for low IFR in the morning, clearing to VFR by 10am. I arrived at my hangar around 8am to preflight and get the airplane ready. Then I sat on the wing until about 9:15am when I started to see the ceilings come up. First 100′, then finally 200′. I had plenty of gas to come home or hold if need be, so I fired up the engines and taxied out.
Climbing out I felt the vibration strongly today. Wouldn’t it be nice if all this was caused by the props being unbalanced. I did see the removal of spinner weights during the last annual, so it may be that simple.
The Twin Comanche is a fast airplane and about halfway there I could see that the weather wasn’t coming up as fast as the forecast had predicted. Once transferred to New York approach, I asked them for direct OCPUC on the GPS24, where I’d hold until the weather came up enough to fly the approach. They granted my request, and I held. I actually held for a full hour before the ceilings were reported above legal limits. The autopilot is freakin’ fantastic – thanks to Lancaster Avionics! 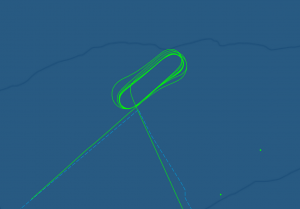 Around 11am now I descended in the hold and flew the GPS 24 into Reedsville. Down below the ridges on either side of me and into the murk. The approach ended up being easy and less than dramatic, which made me wonder if I should have flown it much earlier (ignoring the ASOS weather). No – I think I did it the right way and will continue to do the same thing.
I met a number of people there, and they looked over my airplane approvingly. I admit that I enjoyed the attention, and appreciated the way Mitch treated my machine. The prop balance showed that both props were already within specs, and that East Coast Propellers had done nice work. He did confirm, however that significant vibration was present, but it was combustion related. Mitch could tell this by the frequency of the vibration, and said it could be Lycoming Morning Sickness, or simply sticky valves. The right side was worse than the left, but they both had it.
Reaching out: I have sent out a few emails to the resources I use, and to my A&P. I am determined to find the source of the problem and address it. Since I’m going away for months on this G280 project, I want to get whatever work this entails done between now and next spring.
The first step will be to find out how to access the valve guides and valves on the right side. Does my A&P have borescope experience? His unit was new and he couldn’t get it working at my last oil change, so i missed that opportunity. I’ll talk with him on that, and we can decide how best to assess the remaining cylinders (1 is newly rebuilt).
It may be that the cost of accessing the condition of the right side cylinders means just ordering 3 new or rebuilt ones makes more sense. If that is the case – let’s do that and replace them at annual or even before. I don’t know what is normally done, but need to figure that out.
It will be interesting to see where this goes. I’ll continue to build my war chest in the meantime, and hopefully have enough to two new engines when the time comes. Regardless – I’ll get them done.
Fly Safe!
Frank