Skip to primary content
First Flight: Lots of new things going on in the airplane. New equipment; major maintenance; all new procedures and several modified ones just for the break-in period. The fact that I haven’t touched a light airplane since July makes me acutely aware. 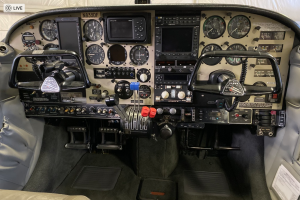 Last night I went over all my notes and summarized my plan of attack for the next day. This summary was just for me, but I’ll share some of it with you.

Paul sent me instructions on how to do the mag check; what to expect; and what not to do. I now had an instruction sheet to take with me for this unique procedure.

I watched a video on the EDM760 monitoring and it seemed easy enough. Downloaded the user manual and declared myself ready.

As the sun went down, I spent an hour deciding how I’d set three video cameras up to record this momentous occasion. I had purchased a mount for my phone, since having a backup Attitude indicator isn’t a bad idea. That activity kept me busy, even though I expected not to be starting any cameras in the morning. I didn’t think I needed another distraction. As it was, I still had unanswered questions:
Arriving at the airfield – 33N. It turns out that the airplane was not in the hangar last night. Good thing that it’s 42 degrees outside, or I wouldn’t have started the engines after being cold-soaked. It would have been nice to know this ahead of time. Communication frustration. I communicate effectively, but folks aren’t hearing me. They also have distractions.

Ralph is a mechanic Paul uses. He participated in the installation of my engines and associated systems and is meticulous. He was there to meet me and support the launch and post flight inspection. Lots of respect for him, and I very much appreciate him being there. He had no concerns this morning and asked if I had any questions. We reviewed my plan and discussed it at length. 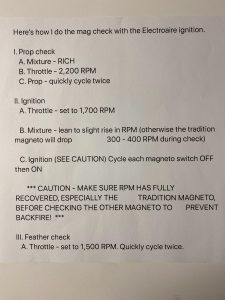 I would be doing an abbreviated run-up based on the sheet Paul had given me. You can see the original sheet at right. I decided to do the prop cycles (2 of them) at 2000 RPM.

Next, I’d set the power (one engine at a time) to 1700 RPM and slight lean the mixture for a sign of a slight rise. I did see one, and it was slight.

Turn off the LEFT MAG first and observe a 150 RPM drop. The left mag is the normal magneto ignition system. Turn the LEFT MAG back on and wait several seconds for the RPM to recover.

Turn off the RIGHT MAG first and observe little or no RPM drop. The right mag is the electronic ignition system. Turn the RIGHT MAG back to complete the mag check.

Skip the feather check until the engines are broken in.

Repeat for the other engine.

This would be an expedited takeoff. I need to minimize the low power runtime on these engines until they are broken in. Expediting anything comes with its own risks, namely forgetting something important in the ensuring haste. It also means breaking tried and true flows that I’m used to. I should have spent more time pondering this, as it ended up biting me twice.

Ralph had recommended a static power check for takeoff. Both props should give me 2650 or better before I released the brakes. I took the runway ahead of landing traffic on 2 mile final – quickly and only after getting her permission. Props came up full and the engines sounded mean. I released the brakes and surged down the runway.

My scan of the instruments was all over the place, but I landed on the original fuel flow gauge. The right engine was showing 12 gph, but the left only 8 gph. If the left fuel controller was failing, that engine might exceed temp limits holding full power. I decided to continue, but it cost me seconds of concentration. There was no asymmetric thrust.

Approaching Vr, the Number two nav display went out. I don’t need it at the moment, but what else was missed? Distractions.

Back to the engines: They felt strong and were holding consistent indications on the old gauges. My eyes went to the EDM 760 and I saw 12.4 GPH showing briefly for the left, and 12.5 GPH for the right. Clearly the engines were fine. Let that go.

Leveling off at 2000′, I had to remember NOT to do my flow and leave the cowl flaps OPEN. I went back to scanning the instruments and watching for traffic. I had been distracted from raising the gear, and didn’t even realize it. They stayed out for quite awhile.

Had I had an engine failure on takeoff, I would have landed straight ahead if I had not realized my oversight. I had increased my risk by missing this key item. Rookie mistake.  I will continue to beat myself up on this one as we go.

At this point I updated my Garmin flight plan successfully from the iPad. Then I engaged the autopilot and it didn’t track NAV at all. Now this is the same autopilot that I spent time and money tuning up just before the engines.

If flew the airplane for an hour, eventually getting the gear up. Number four cylinder on the left side had the highest CHT around 430F at times, but mostly 420F. Ralph checked it as good.

Logistics: I called my neighbor Tom at the last minute to see if he could bring me from Wilmington back to Smyrna to get my car. I sure as hell could have arranged all this ahead of time, but I could not get these folks to commit or communicate. Very frustrating. It worked out that Tom could do it, so I launched to fly it home and would return for my car later in the day.

Another run-up and expedited static power takeoff. This time I didn’t get the door fully latched, but I did get the gear up. I realized the door was not fully sealed as the speed built, but managed to latch it fully before it might have opened. I got the door closed fully, but by the time I leveled off I could still hear air leaking from the seal. An open door in a PA30 creates significant tail vibrations and is unpleasant at best. I weighed the risks of the door popping open against making this a short flight. I decided to head directly to Wilmington, while keeping the power up as much as possible. I  eventually had to raise the nose the get the gear down, but it is what it is. Less than ideal.

Upon landing I realized that the air sound coming from the door was actually the fuel pumps I’d left on after takeoff. Screwing with my flows after not flying for so long isn’t going well. Not real proud of myself. I am confident that all these flaws will be sorted out before the next flight on the 21st – later today as I write this.

On the ground at Wilmington, I hurried the taxi and shut down at my hangar.

The autopilot is a disappointment. Just spent money fine tuning that before the engine work. I know something had to have been disturbed while the engine monitors went in, but I don’t expect to get any buy-in on that theory from Paul. I’ll end up back an Avionics shop in Lancaster where I’ll have to listen to a negative description of the work that was just done while writing them a new check. I’ve seen and heard these songs so many times before.
The engine work that was done is sound and impressive, from what I’ve seen thus far. I’ll get the autopilot working again, but probably not before Savannah. Unless of course it is something simple like a plug not being re-engaged. Wishful thinking.

As for Savannah. Progress was made. I need 9 hours on the airplane before the oil change in order to go. Possible, but will be hard to do. The autopilot would have been nice to have for the trip, given I haven’t flown this since last July. I’ll have to seriously weigh whether or not I’m up to the task, given that low weather will cancel me anyway. Being March doesn’t help, as I expect some winter action to be coming.

Riding the Harley to Savannah is my backup plan. I am happy either way, just to have N833DF back in my hangar.

Heading to work for the morning. Flying later today (21st)