It’s Thursday morning and I went into work early. The plan was to leave after lunch to go put another two hours on the airplane at full power. I’m feeling a little crunched on time – given what I have left to do. I need to practice the G280 classroom instruction and read; burn off the 10 hours of flying no later than Tuesday; arrange an oil change between Wednesday and Friday (and the logistics around that); work at FlightSafety; and do a jet trip this weekend.

Let’s think that through after this flight. For now I need to be focused on not making any mistakes.

No video again today. I won’t add that distraction until I can do everything automatically again; not forget anything; and be smooth in my operation. I’m not there yet.

Starting out from the hangar, I sought to minimize the ground run time. Both engines fired right up and I taxied out to Echo for the call to ground. Ground cleared me to runway 32, but I came back to them requesting Runway 9. I explained I had new engines; needed to minimize ground time; and they granted Runway 9 with the winds at 320/4. Tower got me right out too!

Got the gear up on time, but the fuel pumps were left on for two minutes. Still working on getting my groove back. I did notice that the left prop didn’t come up to 2650 on the roll. It finally did by the time I reached 1000′. I did not want to abort for that.

Lycoming guidance on oil temps was to keep them 180 to 220. With the cold air and cowls open, I haven’t gotten above 160 degrees on these flights. I was nervous about closing the flaps, but did so partially during the flight. Still unable to get to 180 degrees.

Power was maintained throughout at 26 squared. Smooth operation and a pleasing sound, though it’s hard to be pushing this investment so hard. You gotta do what you gotta do though, so I’ll head out and do it again tomorrow. I had to reduce power occasionally as I was topping out on airspeed – well into the yellow arc.

CHTs on the #4 cylinder of the left engine are now under 400 degrees, from as high as 420. Temp came down on the hottest cylinder to under 400 in the second hour. Limiting factor was airspeed – top of the yellow at times

I still have not mastered the EDM 760. It is still doing whatever it wants and I can only generally influence it. I’ll do a training video on that once things are normal.

About 10 minutes into the flight I realized that I had forgotten just how to get the autopilot into NAV tracking mode. All the new stuff I’d learned on other airplanes pushed that penguin right off my iceberg. It took me another 5 minutes to remember that heading mode is the default, and you hit GNSS on the Aspen PFD to engage NAV. How could I have forgotten that?!

Wow. What else have I forgotten?  Am I really ready for a surprise instrument approach in this machine that cruises at 172 kts? Maybe not.

So now I realize that Paul did not disturb anything at all related to the autopilot. The NAV mode works fine, but it is the Pitch mode that doesn’t work again. It may come back on it’s own, but I’ll take it up to Lancaster Avionics in the spring. Lack of use kills it I think.

I’m stepping back and slowing down now. Looking at the time remaining, I can’t see how I can get this flight time in and arrange the logistics around an oil change before I leave for Savannah on the first. Remember – I have to study and prepare on top of everything else. Weather has to cooperate. Travel plans have to be secured.

I did see that XM weather is working and the FlightStream 210 also works well. The traffic display on the Garmin and on the iPad was invaluable today; particularly around Delaware Airpark. 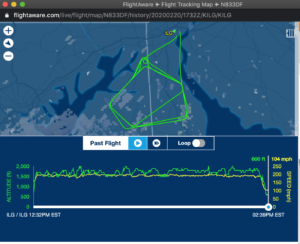 The route I followed was based on the Smyrna VOR (ENO) and several waypoints that generally defined an area south of the C&D canal and north of Dover AFB. I requested flight following from Dover when I crossed the canal. I should mention that Wilmington tower had set me up with Philly when they heard what I was doing, but I declined thinking that it would be easier just talking with Dover.

As it turns out, the area I chose had me switching from Dover to Potomac to Philly for flight following. I was inconveniencing everyone as I went around. After heading back to Dover, I canceled flight following with Philly and just let Dover know I was in the area listening, but did not want further flight following. That seemed to work well, giving me another set of eyes in busy airspace. He did call me out as traffic to the SP Helicopter, and i chimed in that I had a visual on him.  Worked fine.

I put my airplane away with the heaters and the battery minder, and then went home to prepare for Savannah. After dinner, I talked about the planned flight with Bev and voiced my concerns over time pressure and my inability to do any practice approaches before I left. I would only be doing full power VFR runs up to that point.

I convinced myself that the airplane might be ready, but I am not. I’m either going to take the Harley to KSAV, fly commercial, or drive. I’m happy to have my airplane home, but I’m working to hard on too many things to do any of them well.

Todays Flight: The new engines are so very cool!  I talked with Paul about the low oil temps, and he tells me to fly it like I normally would. The cowl flaps will be closed today, and I’ll do full power runs and watch CHTs and OIL.

I do a jet trip over the weekend, and then it’s all Savannah prep next week. I can’t come up short down there. Nope.

When I get home I’ll be able to start doing practice approaches. Looking forward to getting back in the grove in N833DF.