The virus thing is still going on, but let’s talk about anything else for awhile. 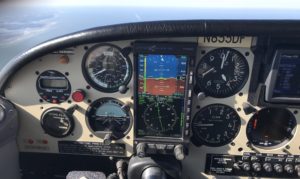 N833DF may not be the best Twin Comanche out there, but I can assure you it is the most expensive

This quote is something I came across in one of the aviation magazines I subscribe to, so I stole it. It is certainly true for me, and the joy I have flying this thing keeps me from crying 😉

Cross-country flight: Saturday, April 11th was supposed to be windy with gusts up north, but calm winds down near my destination, southwest of Norfolk, VA. Lately I’ve been flying in whatever wind I end up with so that I can get back in the groove again. All of my landings have been satisfying thus far, except the last one. I happened to notice the wind finally dropped to maybe 7 knots off the right wing, so I opted for my first full flap landing in awhile.

What I didn’t do was slow down enough. I’ve been battling high and gusting winds all along, so I’ve been adding airspeed and using little or no flaps. The result of coming in with full flaps and a higher airspeed was predictable. She didn’t want to land and I bounced it a few times.

For today’s flight I planned the flight south at 4,000′ while keeping the power up to at least 75% (24 squared).  I’d either land at KPVG and taxi back to pick up my next clearance, or do a low approach and pick up that clearance in the air. That would give me some practice with what I’ll call IFR administrative duties. Shaking off the rust and getting back to normal again.

I have three action cameras now, 2 Heros & 1 cheap ActionCam. Rarely have I taken the time to use more than one of these cameras on any one flight. My interest in using multiple cameras at once changed when I watched a Bonanza pilot blog where the pilot used multiple cameras and perspectives to great effect. He set a high bar, in my opinion, that I acknowledge will be difficult for me to reach with the time I’m willing to invest. I am currently more interested in spooling back up my PA30 IFR skills than I am in improving my video skills. Maybe I can do both – we’ll see.

Engine Management includes continued break-in procedures. During this flight I kept the power up to 24 squared (75%) but did begin to lean from full rich. I leaned both sides initially to 10 gph and watched the CHTs. I acknowledge that I paid little attention the EGTs since this process started, since the entire focus has been full rich and cowl flaps open anyway. Now that I’m leaning and working the cowl flaps toward closed in cruise, I need to re-read Mike Busch and other sources to plan my leaning process going forward.

It seems to me that the right engine is fully broken in, based on CHT performance, and all that is left is to verify stabilized oil consumption. The left engine #4 cylinder has been running 40 degrees hotter than the same cylinder on the right, and I’ve been watching that as my limiting factor all along. Toward the end of the flight today, I did see that CHT drop to 30 degrees hotter. I think that one is finally breaking in. Can’t wait to see how it looks on the next flight.

You can see my one camera video on YouTube for this latest flight, along with many other videos included in my channel. Subscribe if you’d like to stay in touch and have something to watch.

My next flight will be in a different direction, possibly north. I’ll determine the range to ensure I have enough fuel to get home if the FBO happens to be closed suddenly. I’ll most likely install permanent sticky mounts for the GoPro on my sundeck, and put those other mounts away. We’ll see if I can ramp up to 2 cameras for the next flight, and also include battery power for the Hero8.