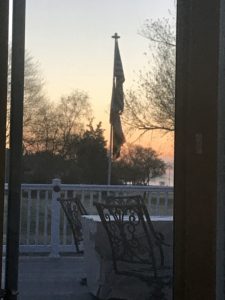 The winds are dead calm this morning and the temperature is 29o in Chesapeake City, as you can see from my view out the window. I am so grateful that I put the heaters back in the airplane after the last flight. I had actually thought it would be warm enough in April and had packed them away earlier in the month.

I’m also grateful that I have a place to go and something important to do, now that I’m off of work for 30 days and it is too cold to bike on the trail. Yes, there are folks out there bicycling and jogging everyday, rain or shine, but I just don’t want to be one of them. 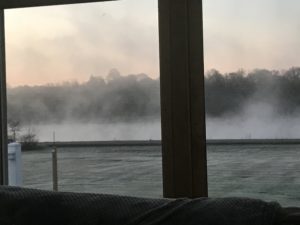 The steam fog I can see out of the other window captures the fact that it is both cold and calm, but it won’t be by the time I go flying this morning. Winds are expected to pick up and gust in the 12 to 19 knot range as the sun comes up. It will be worse later in the day, but that has been the experience since I started flying again in mid-February. More of the same.

I’m going flying this morning to gather some data while I perform two types of flying. The initial segment of the flight will be down low at full power, attempting to replicate an earlier flight so that I can evaluate CHTs. As I said in the previous blog, a significant drop in CHTs could indicate that engine break-in has been achieved. I haven’t seen that, and it may be due to the fact that outlying variables had changed. Cowl flaps, fuel flow, and OAT namely.

The second segment will be conducted differently than I had discussed in my previous blog. My understanding of the technical details and discoveries I talked about there haven’t changed, but the strategies for conducting the flight has. My Cirrus flying friend Mike and I spent an hour or so last night on a webex working out the details that will take better care of these engines.

Upon completion of the down low power segment of the flight, I’ll climb to 5,500′ and plan to be near Summit airport in central Delaware. From there I’ll plan a circuit south that will keep me in Dovers airspace, allowing for flight following. My safety pilot bailed on me this morning, so I’ll use Dover as another set of traffic eyes.

The 5500′ altitude affords me less traffic, will hopefully keep me clear of eagles and other birds, and will allow for 65% power in level flight. It will also be cooler to help ensure I can do the lean test with minimal CHT threats on my cylinders.

Here is my updated test plan:

I will download the data and analyze both segments of the flight. The goals will be to determine if I see any CHT drops on the first segment, and then to calculate what the current GAMI spread is by comparing fuel flow to individual EFT peaks.  It will be interesting to see what the data reveals.

This is what the long hand form looks like for determining GAMI spread. 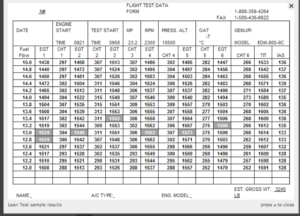 I’m going flying and looking forward to it!