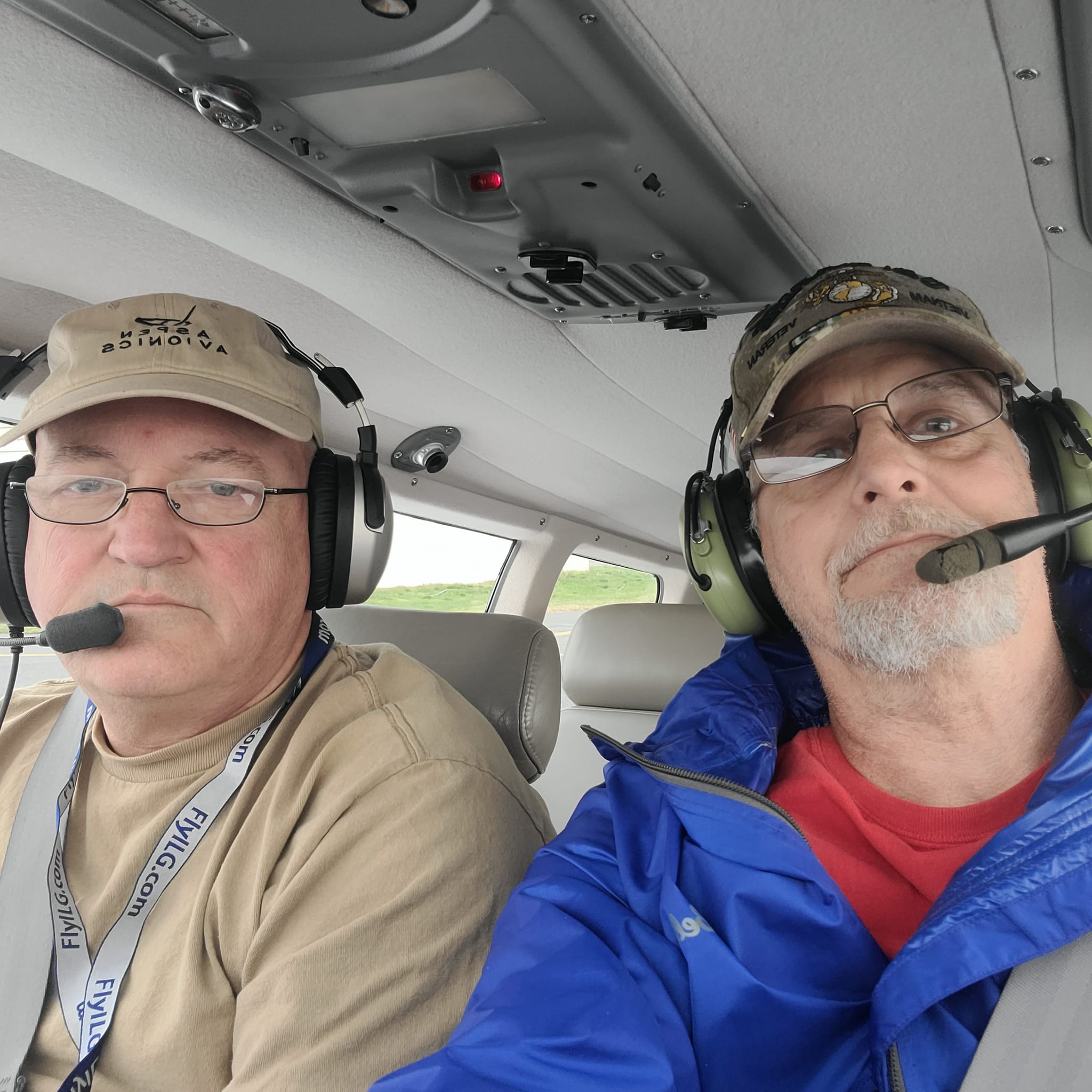 I was just a little nervous about the annual for N833DF this year. With all the treasure I’ve put into this airplane, I was very much looking forward to sailing through another annual with no issues. I had put fresh engines, props, an upgraded Aspen, and the Avidyne IFD550 in there over the lat two years. Subsequently, I’ve enjoyed two years of uninterrupted reliable operation. Kudos to Paul and Ralph down at Phill-Air (33N)

This years annual was completed with no unexpected squawks, which is what I’d been hoping for. Paul did suggest that I order two fuel boost pumps for next year, stating that wear is evident and losing one would prevent you from starting an injected engine. They’ll be good for another year of operation, however, so I’ll get those ordered for next year. We’ll also be refurbishing the fuel selector at the same time.

I repositioned the airplane back to my KILG Wilmington, DE home base; arriving back home an hour before Biden’s recurring TFR went into effect. I didn’t do any flying this past weekend to avoid the hassle, but I’m going to have to start using the TFR process they have in place. Biden comes home more than a school boy in third grade, so I’m going to have to fly while he is here.

Weekend Reading: This has to be the wettest spring in awhile, so I stayed in while it rained and found the Avidyne book I received with my new navigator. I tried to master the new equipment by reading the basics and flying it. It’s much more fun flying than reading, but when you hit enough snags it is time to read the book.

When I did open the book and started reading again – page for page this time – I was able to better understand a number of things that have been troubling me. The IFD550 is a vastly more powerful tool than the Garmin 530W I was used to, and requires will require overcoming negative transfer.

I’ll layout what I’ve learned or re-learned later in the post. For now – let’s talk about those things I was able to experiment with during a flight in the rain yesterday.

Flying in the rain: I had planned on taking an instructor/safety pilot/friend for a ride yesterday (Monday) to fly three approaches. Before I could do that, however, I was reminded by a phone call that reminded me I had already promised to take a friend flying that day. Fred is a former Marine and was looking forward to going flying, so we flew south and into the incoming rain for a few approaches at Delaware Coastal Airport (KGED).

On this flight I managed to log two precision RNAV approaches on this flight, as well as intercepts and holds. I’ll do another flight and log another four approaches to maintain instrument currency later this month.

Since I had a passenger this day, and was busy with IMC and rain, I didn’t get to do much experimenting with what I’d just learned. This first talk about those things I was able to accomplish. After that I’ll get into what is next.

GPS Status: You can go to the SYS page and cycle through the LSK to reach the GPS Status. I needed to do this when my GPS indicator on the upper right was yellow. I sincerely thought my unit had failed to acquire a GPS signal and didn’t know how to check that signal.

As it turns out, the GPS indicator for this unit remains YELLOW if there is no flight plan entered, as was the case when I left Jekyll Island in February. It will also remain YELLOW if the flight plan is not been activated; if there is no active flight plan leg; or if no GPS signal is being received. This is critical to understand, and is mentioned in a single sentence in maybe two places in this manual.

Note that the Flight Plan will activate itself if you takeoff without doing so.

Oil Change Timer: Apparently, the TIMERS feature can be used to track hours flown. I’ve added a timer, labeled it ‘Oil Change’, and now I’ll get a reminder when I’m within 5 hours of the 50 hour oil change mark. This is also a legal AD inspection requirement for me, so this can be helpful. I’ve never ever forgotten this restriction, so this feature is less than ground-breaking. Still – it’s there and I’m using it.

Adding waypoints to an arrival or departure procedure is possible if you have version 10.2.3.1 or later. I verified that I’m operating with version 10.2.6.1. I may get to use this at some point, but I’ll wonder if I will remember it when I need it. To check your version, go to the SYS page and cycle the LSK until you see Software Status.

Clearing a Flight Plan: Here is one I really wanted to know. When I am flying a complicated flight plan for training or a cross-country trip, I’ve wanted to clean up the waypoints to make it easier to manage changes. Previously I would delete each waypoint individually. During Monday’s flight I had just gone missed from an approach into Delaware Coastal and was cleared direct to my home airport, KILG.

I could add that to the end of the flight plan (which already had two destinations and two approaches). Instead, I added KILG to the end and selected GPS Direct. Then I used the Aspen to go into heading mode for the autopilot. Next I went to the FMS FPL tab; selected Current Route; then pressed CLR. You have to then go back to the FPL tab and add KILG again, but that is all that is there at this point. I do plan to use this procedure and like that I found this approach. In many cases, it will be easier to modify the plan in ForeFlight and simply upload it.

Uploading Data: I’ve had issues twice loading updated Electronic Charts. The solution has been to clear the cache in the JDM application, and also to reformat the USB Key as FAT32. This works to resolve the issues. I’m considering reformatting the USB Key each time as a safeguard.

The features I’ll document a few of the features I that I feel I’ve implemented. Many were rediscovered during this re-read

Mini Flight Plan: This one both excites and frustrates me. I’ve been able to see it efficiently shrink the size of my flight plan by NOT showing me every intersection. Instead it might show me KILG ENO V29.LAFLN KGED instead of all of the intermediate waypoints. While I have this option selected, I haven’t seen it use the more efficient presentation yet. What is missing is effective documentation on what it DOES DO and what I SHOULD EXPECT TO SEE. Frustrating.

Multiple Destinations in a flight plan. Finding out that simply hitting the PROC key multiple times will cycle you through the approaches for destinations in your flight plan was a big learning for me. That was a WIN! On the other hand, I have decided not to use this feature to add repeated approaches to the same airport. I find that far too confusing in the heat of battle.

[FPL] [INFO]: Using the info page. It is more useful if you highlight one of the waypoints on the FPL Tab (airport or VOR, for example) and then go to the INFO Tab. Look on the left side for PASTE and you’ll quickly get the information available for that waypoint. Cool feature I’ll use all the time!

[NRST]: This is a reminder that you can find the nearest VORs, and from there also get the frequency you are looking for. See also the [FPL] [INFO] feature.

[AUX] [AUDIO]: Comm Presets. I added several of these under my user profile ‘Frank’. Now that I’ve loaded them, I need to back them up.

OBS Mode: Upper right button (CDI Nav/Source Knob) switches from GPS into OBS mode. Use this to fly a heading that will intercept a radial to a waypoint (the next one). Reaching the waypoint, GPS mode is reactivated. You can use this method to intercept a DME ARC by activating the ARC leg and then flying an intercept heading.

North Up / Track Up: Switch North Up / Track Up by pressing lower right knob (Multi-Function Knob). Look for north symbol upper right and TRK symbol next to heading or track top/center. I use this all the time.

View Cursor: On MAP page; use View Cursor to walk through and center each waypoint on the screen as you check your flight plan.

Course Offset: On FPL, select the TO Waypoint. Select left side Offset LSK and set value by turning the multi-function knob.

Retry Approach: This LSK only shows up after a Vector-To-Final approach

Bypass a Procedure Turn within an approach: These waypoints cannot be deleted. Simply select the next waypoint and activate the leg instead to bypass the procedure turn.

Random Hold: Go to the FPL page and position the Insert Cursor after the waypoint you’d like to hold at. Press Enter; Select Hold; Fill in the data that ATC directed. Note that ATC gives a holding RADIAL to follow whereas the IFD uses a TO Radial. Therefore you must add or subtract 180 degrees!

Verify the hold is correct by observing that the ‘Hold South of’ type message is appropriate to the instructions given.

Published HOLD: On the FPL tab, place the Insert Cursor after the waypoint you’d like to hold at. Enter / Select Hold. If there is a published Hold or Holds here, you’ll be presented choices.

Present Position Hold: On the MAP tab, rubber band a new waypoint in front of the airplane. On the FPL tab, place the Insert Cursor after the new waypoint you just created. Enter / Select Hold. Accept default or alter data.

Admittedly there still remains a few features that I do not understand, or they simply do not work. In any event, I’ll have to continue researching those until resolved. I do plan to send these unanswered questions to tech support. I’ll read the FAQ first, however.

That’s it for now – I’m off to research further.