Drove up to Wilmington this morning to perform a ferry flight for a Grumman AA5-B Traveler. The airplane was well out of annual, and needed to be moved about 20nm to a place where that annual could be performed.

I hadn’t flown that type of airplane for some time, so I found and read the POH to prepare. I do recall that the AA5B wasn’t a particularly challenging airplane to fly, but you do have to keep that spring loaded nose gear off the runway until the mains touch.   Other than that – don’t spin it and you’ll be fine. 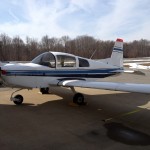 Ed, the owner, and I had been talking through the week about the progress of the paperwork and the status of the airplane. The FAA wanted the transponder check performed before I could move the airplane, and I asked to have the battery replaced.  Jump starting it wasn’t an option, in case I needed an enroute restart.

I arrived at KILG to meet Ed around 9:45 on the nicest weather day we’ve had in awhile. Winds were 140 @7 earlier, but reported as calm at the moment. I checked the fuel and did a thorough pre-flight. I gave particular attention to oil; fuel tanks for water and content; exhaust stacks for cracks and corrosion;  landing gear and tire condition; control surfaces; and the engine and engine compartment.  The airplane was incredibly clean after Ed dressed it up.

Minor squawks include broken elevator edge fairings (plastic) that really needed to be replaced, and some play in the left flap. Ed reported hearing a miss when he started it the other day, and I was watching for that.  Roger, the mechanic who did the ferry inspection, told Ed to be mindful of the brakes after having sat for so long.

I told Ed I was good to go, and asked him to leave for 58M the minute I started up. We pulled the airplane over the ice left on the ramp, and I fired it up. I taxiied to Runway 9, K5.  I tested the brakes along the way.  Not great, but worked ok enough for me to get to the runway and hold in place for the runup.  No real issues.

Cleared for takeoff, I used some brakes to steer while still at a low airspeed. As the speed built, I found myself over controlling.  Keeping my feet on the floor and waiting for rudder effectiveness solved that problem.  Looking back, I think the brake problem was evident at this time, and I missed it.

The airplane flew fine through 500′ when I was cleared for a right turn on course – west. Climbing through 1500′, the engine rpms dropped to 2200 rpm. I could feel the engine vibrate and the power reduce.  I kept the climb in and worked the problem, thinking maybe fouled plugs or magneto issues that hadn’t surfaced in the runup.

At 3000′ the power dropped off to about 60%;  I pitched down to maintain airspeed, and let Wilmington tower know I was circling while diagnosing a rough engine.  I tried carb heat; left magneto; right magneto; back to both; and mixture.  Nothing was working, so I decided to return to Wilmington.  They asked if I needed assistance and I declined, but did accept their clearance to land.

Now I’ve been flying injected airplanes for some time, and carb heat operation is not part of my normal routine.  I decided to try carb heat again, only this time leaving it in for more time as required.  Thirty seconds after carb heat was applied, my RPMs jumped back to 2500 and the engine ran smoothly.  Seems that carb ice was the problem.  I let Wilmington know I was good, and proceeding to my destination.  Wilmington cancelled my landing clearance and I signed off with them.

After that drama, I stayed at 3000′ until reaching my destination.  I started spiraling down to the east of the airport, so I could glide in if the engine quit. No such drama, so I was really having some fun now.  Hated having to continue setting up to land, but resisted the temptation to fly ar0und a bit.

The landing: After calling out that I was circling east for a landing on Cecil County RW31, the unicom frequeny came alive letting me know that RW13 was preferred with a 5 kt wind out of 140.  Landing downhill on RW13 would leave me exposed if  the brakes faded or failed, or if I was rusty in this airplane and came in a bit hot.  I was hedging my bets.

Good thing I stuck to my guns. On final approach to runway 31, I was a bit high and knew I wanted a no-brake landing to be conservative. I was comfortable in the airplane and put in a wicked forward slip down over the trees and wires. Over the threshold I came out of the slip, and found setting the pitch attitude in the flare to come completely naturally. Light touchdown – no brakes – kept the nosewheel off the ground – and had to add power for the taxiway turn  off.  Life is good.  That was fun!!!

All the drama is over….  NOT!!   I turned off onto the taxiway and headed back downhill toward the service hangar. The airplane started pulling toward the snowbanks on the left, and I quickly realized that the right brake was completely ineffective.  Thinking fast, I put both feet on the right pedal, but I still could not slow down.

Next I pulled the mixture to save the engine and prop if an excursion were to occur;  kept both feet on the right brake only; and slowly slowly slowly brought the airplane to a stop on the taxiway.  With no brake on the right, I shudder to think what might have happened landing on runway 13 and heading downhill in a hurry.  Would I have realized it and taken off;  pulled left and hit a snow bank; or run off the other end?  Next time I’ll check the brakes more intently.

I left plenty of margin to cover the things I did less than perfectly.   All – in – All – a successful mission.