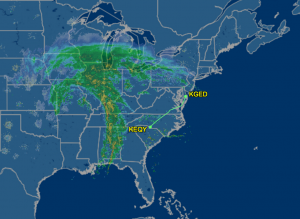 Angel Flight is an organization that arranges flights for people who need them and cannot afford them (among other things). Think about a year-end donation.

The woman I flew yesterday has two primary cancers she is fighting. I moved her for treatment, along with her son who was supporting her. She called herself lucky to get breast cancer, since that helped the doctors detect her lung cancer very early. She is in good shape now, but it should give us all pause to reflect on our own blessings.

The flying on this trip was a real weather work-out. The advanced equipment in my airplane and on the ground improved the experience, and allowed it to be completed safely. Angel Flight East provides electronic waiver forms right on your iPad now, and I had the passengers simply finger sign on the device. I sent it in via an email link, and that’s it! Later, the mission report was filed in minutes in a similar manner. The coordination was largely on the pilots, once schedule, but Angel Flight East did it’s part efficiently. Smooth process and flawless coordination in challenging weather. All that from a volunteer organization. Nicely done!.

I departed Georgetown to pick up the passengers in Norfolk.  Ceilings were 3000′ in the north, lowering to around 2000′ in the Norfolk area. I was vectored to a right downwind to RWY 5, presumably for the ILS, but picked up the airport visually on about a 3 mile right downwind. The landing was uneventful in less than 13 kts of wind.

I had been reviewing the weather down in Charlotte during the flight down to Norfolk. Once on the ground, I made the decision not to depart for KEQY until the weather came up down there. The actual weather had been running consistently worse than forecast, and low IFR was all over the area. My alternate for this leg was right back to Norfolk, and I did not want to take these guys on a four hour journey to a different couch in the same FBO.

The Charlotte (KEQY) Forecast as for 600′ overcast in the early morning; then 800′ for my arrival. Visibilities were to be 2sm or better. The actual weather well into the period was 200′ with 1/2 vis at KCLT, Charlotte International. I’d have flown all the way there and just had to return with that weather. I just didn’t see the point of leaving until I have some confidence it will be eventually be good enough. The fact that the forecast was calling for conditions to go below minimums later in the period solidified my position further.

Angel Flight had contacted Landmark Aviation before my arrival and sent them fee waiver paperwork. It helps, at least my attitude, when I don’t have to pay fees to move these folks. Everyone was doing their part here. I grabbed a cup of coffee in and sat with the passengers to finger-sign forms and send them in for my protection. With that completed, I explained the weather situation and spent a few minutes getting to know them.

I sent a text to the mission pilot meeting us in Charlotte, and let him know that the weather wouldn’t let either of us complete an approach at this time, and that my departure would be delayed until I was confident I could complete the flight. I was surprised to hear they were launching, but then again, they didn’t have passengers yet and diversion anywhere would entail less drama. I checked weather every 10 minutes on my iPad and stuck to my guns.

Some 30 minutes later, the weather came up to 300′ and I felt comfortable launching. I figured it’d be best to get moving, but I did include the passengers in the decision. I told them we’d start flying now, but that if I didn’t see additional improvement halfway to our destination, we’d have to turn around and return to Norfolk. No discussion when the time came, that’s what I would do, rather than loiter on a four hour flight to nowhere. The patient wanted to try to get there, and accepted that opportunity readily. We launched, and I told them it’d be bumpy.

Flying southeast at 8000′ kept us out of most of the cells and the associated bumps. Continuous light chop was tolerable all the way, with only occasional moderate rain. The temps were warm, so no threat of icing at altitude. The bumps were tiring, but the strategy was working.

Thirty minutes out from Charlotte, we crossed the cold front from the back. Descending would take us down into the cells with tops around 6500′. We had to descend at some point; I had delayed going into it as long as possible.

Descending into moderate rain cells now, the continuos chop became moderate down to 6000′. I tightened my seatbelt, warned the son in the back, and reached over an snugged her lap belt for her. Just seconds later, everyone’s head hit the ceiling and ATC started calling out vectors. One real big sever jolt and a few spirited moderate ones had me miss a call, but we quickly got that all sorted out.

Now that everyones head had hit the ceiling, there was nothing more I could do to make them comfortable and dodge weather. I needed to continue on down where it’d be at least just as rough. The passengers actually handled it all very well, and we pressed on for the approach. Their next leg would take them even closer to thunderstorms moving in from the southwest. We had just flown through a developing band for sure. It was getting pretty sporty.

Our destination (KEQY) has a notam on it’s ILS that requires over 300′ AGL for the DA. As a result, the GPS 5 approach was the better choice for it’s lower minimums, but at 300′, I was going to need it all. I flew the approach on automation in moderate turbulence, and the airplane flew it nicely.  Issues I’d had with the #2 NAV/COMM display had cleared up as soon as I used the heater and reduced the moisture in the panel. I love this airplane.

Once I landed, I filled with gas from the truck. I could have saved money taxiing to the tanks and doing it myself, but I wanted to get started back home ASAP. Since I had gotten beaten up badly while under 6000′, I filed for 9000′ and planned to press for a climb right out of the gate. I didn’t need to ask, and was at 9000′ heading back through the developing weather area, but above most of the turbulence. I enjoyed 200+ knot ground speeds for most of the flight, and landed to cold and gusting winds in Georgetown.

As always, I see areas where I could have been smoother and executed each move more smartly, but the strategy worked very well and I felt I managed it all very well. I actually broke out in plenty of time landing at KEQY – around 700′.  I disconnected the autopilot at that point, but didn’t hold the wind correction as well as I’d like. Sloppy, but safe, localizer tracking that no one but me noticed.

While the flight itself was pretty bumpy in the Charlotte area – I got it done safely and enjoyed the challenge. This flight required the full capability of Piper’s amazing machine to operate in poor weather. Had it been colder – ice at altitude would have most likely have kept me from doing it. I accept that limitation and don’t plan to add boots or additional ice protection.

For it’s part, Angel Flight East really has it’s act together. I used the electronic IPAD form to submit signed pax waivers, and loved it. Filing the mission report took only a moment the next morning, and now I have that for taxes. The coordination of the mission also went well.

I am impressed with this organization.