Aspen Battery:  The emergency backup battery in the Aspen PFD must be replaced every 3 years for it to remain airworthy. Even though I had asked, and reminded them, the shop missed it and I had to go back today to complete that portion of the IFR recertification. They apologized for missing it, and put me at the head of the line on their schedule. I’m good with that. I actually think working with Lancaster Aviation will be a positive experience, and need professionals to help me keep this amazing airplane in flying condition.

Without pre-heat, I would not be able to get this work done on my airplane. No way. It would be March before all this was accomplished.

Last night it was slightly below zero degrees Fahrenheit in Chesapeake City, and it didn’t get any better by the time I arrived at my hangar. The sun was just coming up and my dashboard read 7 degrees. Entering the hangar, my nacelles were warm to the touch; the cabin was comfortably warm; and the hangar itself was as cold as a walk-in freezer. I have no idea what the oil temperature actually is.

I completed my pre-flight inspection with the hangar door closed to keep out the slight winds that were making it feel colder. The last items on the pre-flight were to pull the plug on the 3 pre-heaters; fold up the blankets and put them aside; and then finally to remove each heater to a storage location. I have an old desk in the hangar that holds the nacelle heaters in specific drawers, and the cabin heater comes out of the back of the airplane and is placed on a shelf in the back. Each one an easy reach when it is time to re-install. 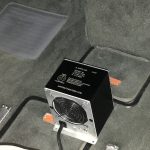 The Hornet 45 model from aircraftheaters.com is what I used in the cabin. I’ve mentioned that I think it needs a handle to be able to better grip, and I’m more convinced of that every time I use it. The airflow arrow could be easier to see as well, but I won’t add an arrow sticker because I don’t know if the constant heat will wear that down. The metal frame itself acts as feet, and could be protected with rubber something. It isn’t sharp, but I have to constantly lean it against my upholstery in the back, and then go outside the airplane to move it. A handle would help.

Starting up:  It is really cold outside. I’ve done an effective pre-flight and have 22 gallons of fuel in just the mains. I won’t be switching tanks for this 15 min flight up to Lancaster, but the full aux and nacelle tanks are there if I need them. I start the right engine first and it fires right up. There is zero oil pressure reading for what seemed like an eternity, but was probably only 10-15 seconds. The right engine has 100W mineral oil still, which is thick as molasses.

Starting the left engine with its variable viscosity oil had the same experience. Fired right up and ran smooth while the first oil pressure indication took the same length of time. I’d be using runway 32 today, and was glad for the taxi time to warm things up. The cabin, of course was comfortable in this bullshit cold, and I’m liking that a ton. It will give my attitude indicator and autopilot a much easier time of warming up, and I think have a direct impact on radio longevity.

The flying: Oh my God!  Pushing up the power on these engines is thrilling in this cold. I fly along in ground effect to blue line, and then pitch up 15 degrees (112 mph) to climb like an elevator to 500′. I’ll do this flight at 2500′ to ensure I don’t puncture Class B above, and because I like sensation of speed low to the ground. I’m looking at 200mph ground speeds this morning, and the airspace is quiet – just me. 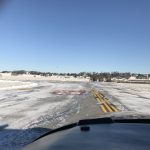 Picking up the ATIS at Lancaster, I realize that I should have investigated how much snow they received. Tower recommended I use runway 26 and avoid the landing threshold since it had ice and snow compacted there. The runway condition code was 4 4 4, which is impossible to translate into actionable information other than ‘Be Careful’.

Landing 26 I could clearly see patches of ice across the surface, but a mostly clear lane to the right of the centerline. That is where I touched down and rolled out, use no brakes at all and whatever rudder was available. 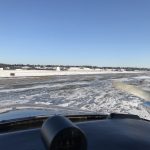 The taxiways I used to pick my way over to Lancaster Avionics were completely snow and ice covered. Not the place you’d want to be in wind, so I appreciated the light winds I found this morning. I couldn’t take a picture of the really bad ones since I was on a high state of alert for sliding. 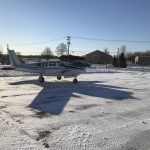 weather review should have been done by me. What I found was an inclined ramp that was 100% compacted ice covered by snow. The entry that was blocked by a cirrus owner who could have chocked the airplane just about anywhere else to leave it clear for the mere mortals coming behind him. I mumbled something about his being a pecker-head to leave his airplane where he did, and I maneuvered gently around him whilst avoiding the fuel truck on my left. Dufus.

The shop had a technician just waiting for me, and he went out onto the frigid ramp to swap the battery. How difficult could this possibly be? I sat in the office to stay warm; worried about the engines cooling again after a short flight; and was happy when he came in a short time later and declared me ready to go. I paid the bill and picked up another sticker for my logbook. IFR Certification in the bag!

Taking off runway 26: I taxied Alpha – Delta – cross runway 31 for a long taxi to runway 26. I wanted the runway I had landed on since I know where the ice is, and didn’t have to ask for it. Plows were on runway 31 trying to improve its condition. The taxi over got the engines warm again, and I was cleared for departure a short time later.

Power coming in sounded great, but I was running out of dry patches and rolling over ice when I realized I had zero airspeed indicated on BOTH my Aspen and my analog indicator. In a flash I decided that moisture must have gotten into the pitot mast somehow, and decided NOT to abort the takeoff. I flicked on the Pitot heat while climbing out and deciding what to do. Let the pitot heat try to open itself, or return to the shop over ice covered taxiways to have them look at it. 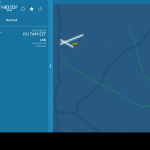 I flew just a few miles south before calling the tower and telling them I’d be coming back. With no airspeed, I used pitch, power, and performance to use known parameters and just estimate what the airspeed would be. Landing gear down on left base for 26 again; pitch up temporarily and listen to the wind before deploying full flaps and landing. I was happy with my performance during this event. Getting more familiar with my airplane.

I left the heat on all the way to the ramp and braved the ice skating rink back to the shop. Now two of the techs came right out and looked at me saying ‘Airspeed?’. I nodded and they got to work. 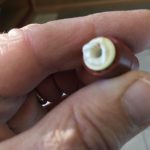 Apparently the plastic Tee fitting used to route the pitot pressure to both instruments broke in the cold when it was moved. I suspect is was handled roughly, but what the hell. It was minus 19 C on the ramp where the tech was working; that is minus 2 degrees F. Bullshit cold. Stuff happens.

New T fitting installed, I picked up yet another sticker for my logbook. The tech felt responsible and the shop didn’t charge me either time nor material. Called it warranty.

I taxied back out to runway 26 and across the frozen tundra. Cleared for departure with the wind now about 7 knots, I scanned the airspeed a bit sooner. No movement and no airspeed (red – Xs on the Aspen), I rejected on the runway and taxied back once again. Takes about 20 minutes every time I do this, and one cold ass engine start sequence.

Back on the ramp again, now 2 techs got involved. As they were headed out, I told them to get their test equipment to ensure we had this right before I started up again. I’d need the airspeed ground tested to avoid another taxi experience and rejected takeoff. The second tech already had the test equipment in his hand, plus new hoses and metal fittings to replace my older style fittings. They pulled the sundeck and replaced the plumbing back to the firewall this time, and it all tested fine.

Going Home: Calling for taxi clearance once again, the ground controller responded – ‘Are you sure?’. Confidence is high, I responded. Let’s give this a try.

Runway 31 was available now. The departure was easy and the performance on this clear cold day was spectacular. Winds were now gusting over 20 and the bumps were considerable on the way home. I had talked with Matt about my flying down to Georgetown after this appointment, instead of doing our maintenance and inspections Feb 1st. I’m glad he wasn’t available to move it – you never know how things are going to go.

All through the day my engines ran well and the vibration only came on for short periods. I’m convincing myself that the engines will show themselves good tomorrow, and I’ll continue to work my squawks down up north over the coming weeks.

That’s enough for now. It is Friday morning as I write this. I’m leaving the house at 6:45 to once again do a frigid morning departure. Flying to Georgetown’s Delaware Coastal Airport for a maintenance session with Matt. Engine oil; filter inspection; compression check; and strobe light diagnostic.