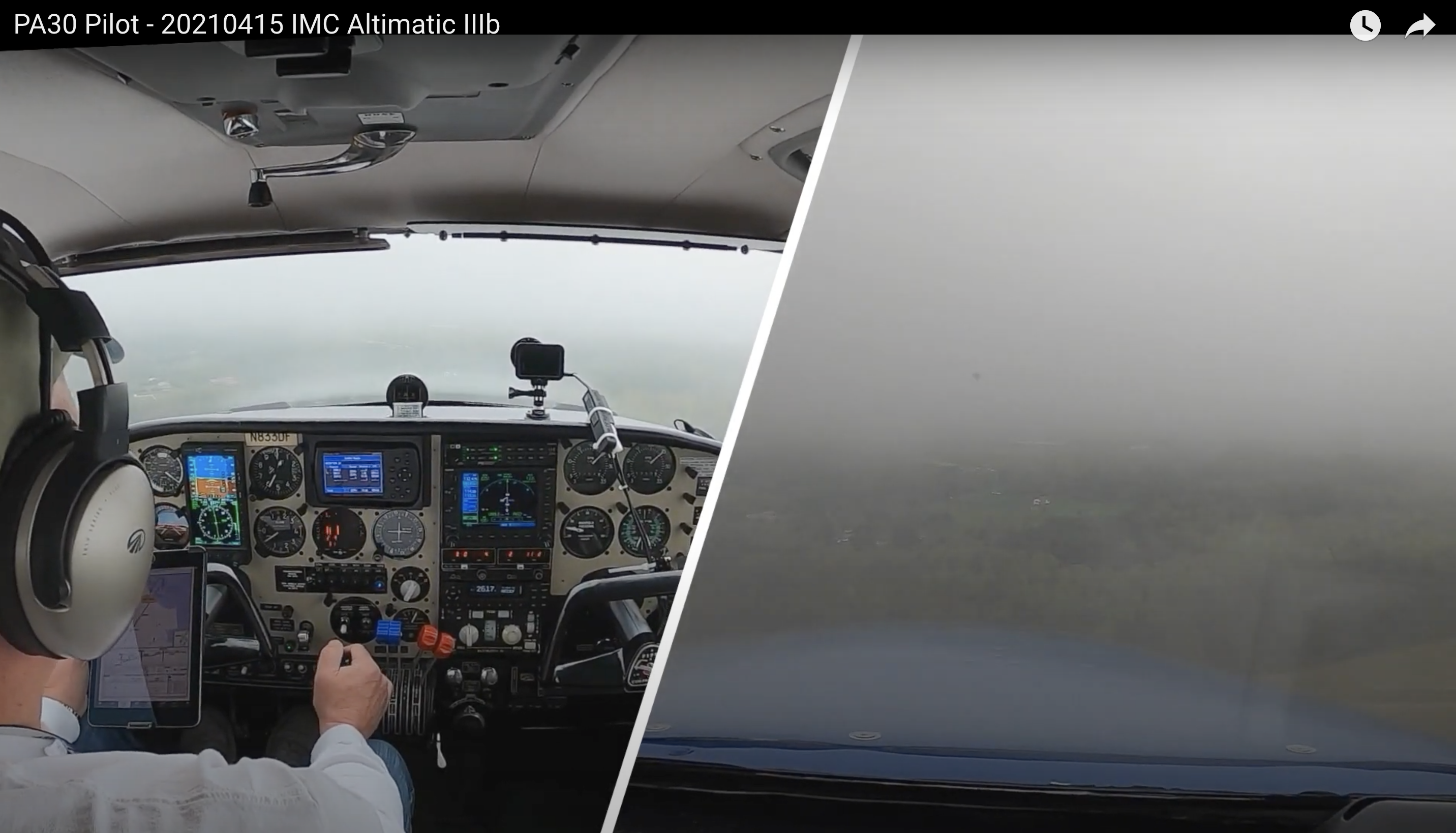 I just came back from a wonderful flight in rain and lowering visibility. It was by no means IFR, but a small step toward lowering my minimums again.

I’ve had pretty high minimums in my airplane for the past year. Mostly because I’ve been distracted while continuously diagnosing issues related the the new equipment I installed. The left engine seemed to be running hot after rebuild, as reported by the EDM 760. The EDM 760 kept giving false alarms related to CHT for a few months, and then fuel flow for the last few.

All that is behind me. I spoke with Lycoming, read the manual, and listened to what my A&P was telling me. The engines have both been running fine with temps that are well within range. I did read Mike Busch on Engines, but much of what he has to stay just doesn’t apply to my smaller lycomings. I spent countless hours trying to reproduced the EGT/CHT relationships and simply couldn’t do it. Now that might of been because I added GAMI injectors and Electro-Air ignition to the mix, but I’m absolutely done thinking about it. Done. My engines are fine.

The engine monitor is finally, finally, reporting all data channels without fail. It took connector replacements to make that happen, but whatever it took I’m happy. Now I’ll use that monitor for accurate fuel management, leaning to a GPH, looking for cylinder anomalies over time, and general engine care. I just wanted it ALL to work. Finally – it does!

So my minimums went high because I recognized the distractions and didn’t fly the practice approaches very well as a result. I have been keeping current, but now I’m refocusing my efforts on driving my PA30 minimums safely back down. You can only do that with practice.

Today, I went flying in the rain. After going to work for a few hours this morning to dig deeper into G280 avionics, I stopped at my hangar and went flying in the rain. It was a short flight in smooth air and lowering visibilities, so my VFR climb to 3000′ was cut short initially. I checked in VFR with Dover and flew the RNAV 27 from BLARE at 2000′ initially. I was able to climb to 3000′ before getting to the final approach course inbound, so the weather wasn’t all that bad.

The altimatic IIIB worked flawlessly, though I decided to step down to 1800′ by the FAF. That meant I would engage LOC mode late, so the vertical guidance did not arm in time for the autopilot to fly us down. No problem – I managed power, retained lateral autopilot, and flew the glideslope manually.

I went missed and flew the RNAV 9, also with vertical guidance. This time I locked and loaded the autopilot and let it do lateral and vertical nav down to circling minimums. During this approach I set up a return IFR flight plan back to Wilmington, and filed while still airborne it as soon as I got a cell signal. I thought it might be tight going back up north in lowering clouds.

The RNAV 9 circle 27 was fun, and I landed out of that just fine.  Truth be told, I landed a bit flat, but no bounce.

Taxi back and depart VFR, I picked up my IFR with Dover. The cleared me direct 5000′ and I asked tor and got 3000′.  Philly cleared me for the RNAV 27 from Woodstown, but I read the NOTAM that this was out of service. I requested VOR 27 full approach, and flew that to a better landing (long landing to expedite taxi to the West Tees).

This is what I love to do. Take a few hours and go practice approaches in weather. I’ll look for 1000′ ceilings next when there isn’t ice or lightning about. That’ll be a great next step on the way to minimums or misses.

Nice flight today and the airplane, avionics, and autopilot all worked like new.