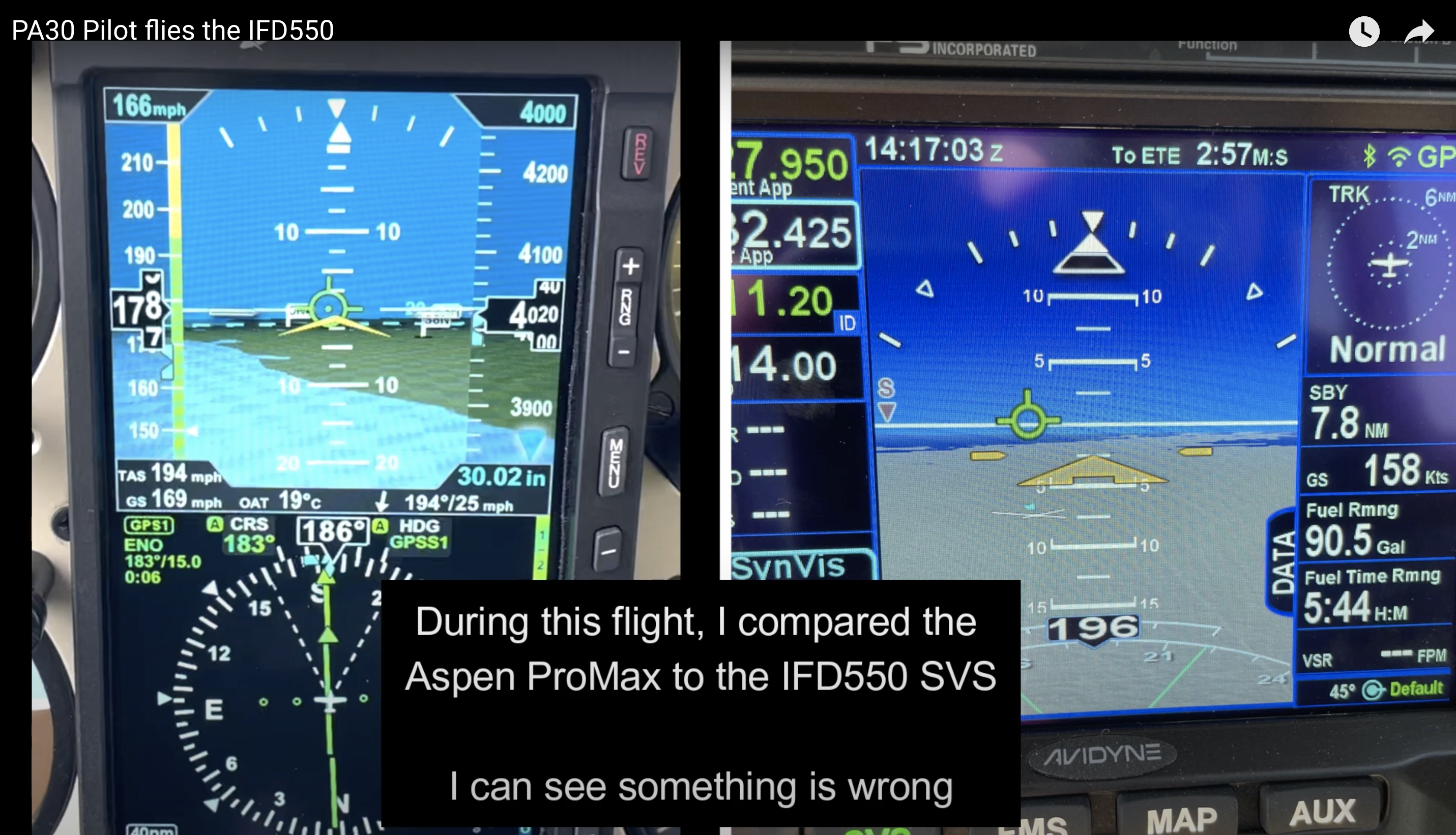 Nav/Comm reliability: I recently experienced escalating radio issues with my radio stack. The primary (#1) NAV/Comm Garmin 530WAAS had been having squelch issues which the shop had addressed once already, so I began to suspect antenna the connections were compromised. The KI-209 that acts as a backup localizer / glideslope indicator for my #2 Nav/Comm, the KX-155, failed it’s glideslope indicator.  Finally, my historically strong and trustworthy KX-155 (#2 NAV/COMM) began to develop intermittent power issues on it’s own, requiring it to be taken out and re-installed just to get it turned on. Something had to be done.

I’d already decided to replace the Garmin 530WAAS with something newer. Working with my shop, they told me the newer Garmin was physically larger there was no room for it without panel modifications. I like my panel, and didn’t want to change it.

Introducing the Avidyne IFD550: Paul Phillips is my A&P working out of 33N as Phill-Air. Paul owns lots of STCs on these birds, and was the guy who actually convinced me to consider this type in the first place when twin shopping. I was there for an oil change a month or so ago, and Paul and I got to talking. He shared with me that he was working on becoming a dealer for Avidyne, and had become familiar with their radios. He wanted me to look at the IFD units before I committed to Garmin, and at least think about it. Paul had an airplane in the shop at the moment with an IFD550 up and running, and insisted I take a look at it. We did just that.

Based that on previous experience flying SR20 displays some years back, Avidyne products weren’t even on my radar. I’m not saying that there is anything wrong with the units or the company, just that there was nothing amazing about them that might pull me away from proven Garmin units.

So we fired up the Avidyne in this airplane to play with it. My level of knowledge on the new FMS style interface wasn’t enough to figure out how to drive the unit without any preparation. I’d heard that these units weren’t intuitive to the Garmin crowd, and I’d say that is true. I paged through what I could until I stumbled across the SVS page showing that this unit had its own internal AHRS and a useful (beautiful) AHRS display. I sat up and took notice. No – it was more than that. I decided right then that I’d consider one of these if I used the trainer and liked the way it operated after having some experience.

Deciding: I downloaded the IFD550 Trainer for my iPad, read quite a bit about the radio, and spent some time understanding how to use the trainer itself. YouTube videos helped in all regards, and a particular shout out to https://www.youtube.com/user/martinpauly

I began to see how powerful this approach might turn out to be. It would also solve the panel problem, and slip right in as a Garmin 530W replacement. I’d have an ADI with synthetic vision in the center panel for the right seater and as a ProMax backup. I can’t believe it but I decided to order the Avidyne IFD550 to replace my Garmin 530WAAS.  Let’s do this.

At this point I’d be getting a new #1 GPS NAV/Comm that would ensure my reliability from that position. That replaces a 20 year old radio and if the new radio showed any signs of weakness, I’ll know for sure I have antenna and/or connection issues.

Plot complication: I had ordered the new #1 radio and scheduled the installation when my #2 NAV/Comm started having sympathy issues. I’d power up the airplane only to have the KX-155 panel completely dark. What fresh hell is this? This radio has been a reliable stalwart of my airplane, so this experience supported my suspicion that there was an issue with the radio rack(s) themselves. When the #1 radio was out, I asked that both radios taken out and the racks and connections looked at closely.

When the IFD550 went in, the rack was found to be broken in the back. I happily paid for new rack components and now have a brand new #1 IFD550 and a solid KX-155 as my #2 NAV/Comm. While they were at it, we swapped my failed KI-209 so I’d have a functional glideslope on my #2. I am actually at zero squawks at this point and looking forward to learning the new system.

I continued to use the IFD550 simulator, and then set up an additional iPad to simulate a panel mounted IFD550 talking with an IFD100 on the other iPad. Avidyne had done quite allot of geeky work to support the learning process.

Teething Pains: Avidyne had an offer out there to extend the warranty to four years. The process for doing that was not smooth and their website seemed to be playing catch-up. That seemed odd given all the quality I’d seen with the products in the field, and finding the right person to talk to was a pain. I got that done though.

I took the new unit flying and it worked great. However, I could not get the WiFi to link to the iPad. I wasn’t concerned and looked into it after I’d landed. You need know the wifi password for one thing, and know where to find that (AUX pages). Once that is in, you will get no error messages or indications as to why it won’t link. I did find a reference to data related issues that prohibit the units from tying together if the data in each doesn’t match, or if the data is out of date.

My unit was new and the sample data had expired by 1 day. I went home and updated the data via JDM to a conventional USB, then downloaded the same data onto my iPad. The two connected readily on the next flight.

Understanding Jeppesen subscriptions was the next thing I had to do. I wanted that 60 day trial, but it wasn’t clear to me if the shop had signed me up or I had to do it. Communication from the shop on these issues were unclear because the shop hadn’t done many of these, and they didn’t fully understand the steps required after installation. Jeppesen cleared that up over the phone and got me set up on my trial data. I’ll wait to buy a subscription at the point where the trial runs out.

Note that I used to get a free Jepp subscription for one iPad, but that isn’t available for the Avidyne units. Interestingly enough – you may not need one.

Foreflight works well with the new unit, as you’d expect. The route transmission takes slightly longer and looks different than Garmin’s, but it basically stays the same. Traffic and weather data moves freely.

I started using the new iPad features that allow two applications to run simultaneously as well. Having Foreflight running along side the IFD100 app is interesting. It is giving me more capability than I need at the moment, given that the radio itself is so much more capable. I may even start flying without a yoke mounted iPad, depending on what failure modes I decide to prepare for.

First trip with the boss: Beverly and I took the airplane down to Newport News for an overnight.

I thought I had everything sorted out at this point, but noticed that the boresight showed an inappropriate pitch attitude on the Synthetic Vision display. It was showing 2.5 degrees nose low and that was confirmed by my Aspen display.

I fumbled around with FB groups and other resources, thinking that’d be faster. I did get some guidance there to give me confidence that this was easily adjustable.

My avionics shop did help, but was really learning along with me. Next I sent an email to Avidyne, but was thinking they might not want me touching the maintenance screens. I delayed this communication because I suspected they’d  want me to fly to the shop to have them adjust the unit.

Not so! Within an hour I had the instructions in my hand and they were clear. I decided to try it before leaving Newport News for home. My excitement faded, however, when I found a maintenance PIN was required. Avidyne did a poor job on this particular page, because it made me stop there for a moment.

In order to continue, I decided to try a simple ‘1234’ entry as a code, but that didn’t work. I didn’t know this, but as it turns out, all I had to do was use the big knob to right past this screen and do what I had to do. I flew home wondering if my shop put in their special code, and that started pissing my off a little. Assumptions!

Once I got home I called the shop and figured out what actually had happened. They confirmed I could have skipped right by this page, but what I accomplished by trying 1234 was to initialize a maintenance PIN which is normally blank. What a pain in my ass. Now I had to document that PIN so maintenance can access these pages in the future. Grrrrrrrrr. Avidyne didn’t make this page clear at all. Remember though that I don’t have the installation manual, so maybe they do make it clear to the installers.

So I did find the page and added a 2.5 degree adjustment to fix the issue. I assume that the adjustment I added will do the trick, but can easily do it again once I see the results. I’m going to fly again this morning just for that test.

Reliable radios once again. The IFD550 is far superior to Garmin GTNs, in my humble opinion. Hands down more powerful and intuitive once you use it. I’ll make some objective points here:

Traveling again: Bev and I are flying to Florida in July, and I’ll be taking it to Dallas again right after that. Pulling out the oxygen again and using this new equipment.