I marshal airplanes on and off the ramp, performing a safety related job function each year at the Angel Flight Wings and Wheels event. I have been doing this for a number of years – working with Gary, John, Bob, Jeff, Hank, Courtney, Adam, and the other volunteers for Angel Flight East. I really enjoy the day, and look forward to working with this guys again.

Logistics: This year, getting there presented a significant logistical challenge. Friday found me working early from home; attending a funeral; attending stressful conference calls in the afternoon; finalizing a roofing contract and arranging to meet with the contractor at the beach; ensuring that I get to the beach with some daylight left to cut a tree away from the roof; and finally figuring out how to get myself to the Angel Flight airshow the next day. The logistics became even more complicated because the status of my airplane was unknown, so getting to the airshow by 8 AM might include a 3 hour drive. If I’m driving, I have to get my gear out of the airplane in the Georgetown hangar before I go, so this would be a late night.

Airplane uncertainty: N833DF has been in the shop all week having some custom work done to repair a repeatedly failing alternate air door design. When the door fails, the door conveniently gets sucked into the air intake; the EGT rises and the fuel flow indication for the affected engine skyrockets. I’ve had this happen three times, and it has happened to both engines. I trust Georgetown Aero Services, and I think we’ve got this nailed this time. The right engine is being worked on now, and we’ll do the same fix to the left engine at the next oil change (it is showing symptoms that will lead to failure now, but is safe for flight).

Execution: I loaded up all my gear so that I’d be able to either fly or drive, leaving Smyrna around 4 PM. The first stop would be at my hangar up north to exchange the mustang for the truck. This would allow me to leave the truck in the Georgetown hangar where it belongs – should the airplane come online in the next hour or so. This ended up being important, and I filled the truck bed with tree branches later that night. I emailed my mechanic to let him know I was southbound, planning to drop off the aircraft logbooks for updating. I also called the contractor and scheduled a meet for 8 PM at the house.

I headed to the Georgetown hangar using the back roads to avoid beach traffic. There I’d drop off the logs to the mechanic and get my gear out of the airplane if the airplane wasn’t ready. As I approached the Rte 113 turn-off in Milford, I took a call from the mechanic. The airplane was back!! Outstanding!! Thanks Steve and Rob (and others that helped) for saving me 6 hours of driving, at least. The timeliness of this call allowed me to head straight to the house, and get started on the tree work.

I cleaned up a crazy Friday by cutting down a significant amount of tree over my shed; cleaning up the site before dark; meeting the contractor and signing that contract to replace the house and shed roofs; and getting ready for the next day. Crazy day.

The flight up: I performed an extensive pre-flight since the airplane’s right engine had 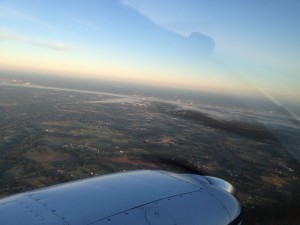 been worked on, and the left engine inspected. Every screw was where it belongs on both cowls, and the airplane checked out fine. I departed Georgetown on post maintenance flight. I intentionally left the video camera in the bag to minimize the distractions. If I lose an engine on takeoff- I have to be on my game here. Manage the risk of a post-maintenance take-off. The take-off was uneventful. Ground fog was forming at Georgetown, with this 6:30 am departure. It was beautiful.

I started taking pictures with my phone while flying by Wilmington. By then I was certain all systems were go, and I could afford to let the autopilot fly for awhile. You can see areas of ground fog in one shot.

I was on an IFR flight plan, receiving vectors from Philly approach right across the Philly airport on my way to Wing’s field. It was beautiful out – just beautiful. It ended up being a nice day for an airshow, and I was glad to be a part of it. 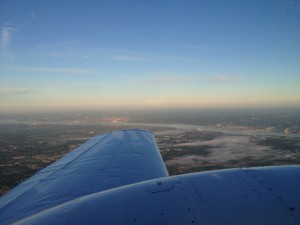 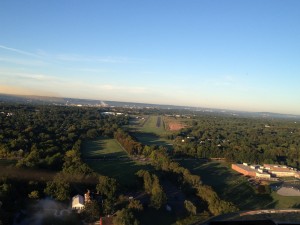 On final to KLOM