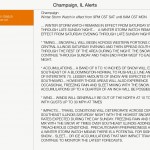 My only worry leading up to  this trip was whether or not the left engine would start. I continue to work with my mechanics to improve left starting, which is really the only glitch that has any mystery about it.

Stayed up late Thursday night getting my work all caught up, paying bills at home that came in by then, and reviewing my training packet to be sure I had everything I needed for this trip and training. Then I checked weather one more time and called it a night.

Woke up early and enjoyed being on vacation. Bev made a nice breakfast, I had some coffee and loaded up the truck. My Georgetown hangar is about 45 minutes south of my primary house and hangar – but I opted to leave the airplane there.  Rob from Georgetown Aero made it possible for me to use their heated hangar the night before. Without that – I could not have used my airplane for this trip.

The ride down was crisp and clear – around 9 degrees F. I arrived at Georgetown Aero Services hangar, and loaded all my gear in warm comfort. Installed the new mount for the iPad Air from RAM Mounts; installed the video camera; put lunch where I could reach it; and then went to put my truck into my hangar down there.

Steve then opened the hangar door and helped guide me while I pulled the airplane out. Since the left engine starting challenge issue last weekend was clearly due to flooding, and since the entire airplane was warm and toasty already, I used minimum prime. Just enough to bump the fuel flow gauges. Both engines fired right up with no drama. I  worried for nothing.

As a point of reference in this experience, here are a few differences in the trip I’d observe – commercial versus doing it yourself.

Flew  over Morgantown and then Ohio State University airports, reminding me of one of my early instrument pilot adventures I had coming back from Oshkosh. Thunderstorms of the worst kind hunted John and I  like dogs.  No  experience. No NEXRAD. Three days to get home. First real solo IMC trip of consequence. Endless VFR today though.

Zanesville is a nice view – but by the time I started looking for the airport I’d use as a stop for passengers – I was over top of it, and never did see it. This was a really nice flight – I spent most of it appreciating where I sit at the moment, and how I got here.  I am very privileged to be able to be screaming along  at 200 mph over snow covered flat 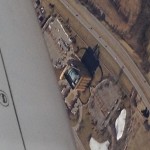 Columbus had a very weird building. Really. I found a four story picnic basket replica building sitting to the east along a major highway.  You can see the inset picture here; Bev tells me it is the Longaberger building in Denton, Ohio.  I’d like to see that from ground level.

Dayton went by. That’s another bucket list item, visiting their museum. I’ll get to that at some point.

Indianapolis, Indiana airport – where I would have landed had I flown out of BWI. Big town – snapped a few pictures – was glad I was not driving from there to Champaign. I flew over Route 74 most of the way – at 180mph!!!

Runway at CMI might as well have been camouflaged. Same color as surrounding flat lands. I acquired it and lost it several times. Should have done an approach. 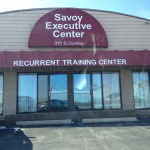 RTC building is not in the best shape,  but functional none-the-less. Glad I’m getting this done quickly, given that Univ of Illinois is closing it’s considerable flight school. That can’t help this business. Update: The University sold it to a junior college, including all of the airplanes. Looks like that fleet will keep moving, which is good news for everyone.

Champaign has old infrastructure. roads are beat, but then again, the weather out here is harsh. There is just no place to hide when the wind blows.

I have an interesting history with this airport, having virtually flown into this airport hundreds of times. It was included in a simulator I purchased (Jeppesen FS200) in the mid 90’s, so I heard the name and ‘flew’ the approaches since then. I only visited it physically once before today – just 6 months ago, when Bev and I stopped here to join up with Jeff for our first Oshkosh camping adventure together. My airplane ended up in a heated hangar, only a few thousand yards from where his hangar was before he moved. The picture on my backup ipad is of her climbing out of the airplane in the same place I left it today. Just interesting coincidences.

Early dinner at Applebees today. Had a wonderful 550 cal dinner that was a nice surprise. Haven’t been sleeping much lately – plan is to buy a very large starbucks; organize my paperwork for the morning; and do pleasure reading tonight. Hit the gym when I get up at 5 am or so tomorrow; then go get it done.

After looking at the building and stopping in to look at the sims; I am hoping for and expecting an experience just like Cherry Pocket. No much to look at but an amazing learning experience at the end of the day.