After arriving yesterday and relying on Flightstar to take care of my airplane, I stopped at RTC to introduce myself and scope out the area.  I let them know that regardless of the incoming snow storm, I’d be there early for the first day of class. The locals I’d spoken too expected a few inches of snow Friday night (tonight), but up to 20″ locally and to the south starting in the afternoon of the next day (Saturday). Most of the instructors lived to the south, where the accumulation was to be heavy.

The stress of getting to Champaign (potential starting or mechanical problems; changes in the weather; work or life interruptions) was behind me. Now it was the stress of a major snow storm that could keep me worthlessly locked in a hotel room, or could prevent my instructors from getting to the facility. 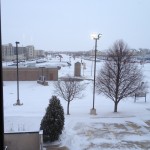 The few inches did arrive overnight,  but didn’t keep anyone from getting to the facility.  The major blast everyone expected was expected during the day today, but at least I’d get the first day accomplished.  Even though I was only a few miles away, I threw a change of clothes into my backpack  in case it became clear this storm was a monster.  I wanted to be able to stay there and encourage the instructor to work all night.  Luck favors the prepared mind….

Saturday was entirely classroom based.  Bill was the instructor, I was the primary student, and Keith was an auditing instructor and experienced retired Falcon jet pilot.  I was also introduced to Jim, an active instructor and A&P who I’ll be flying the simulator with in the morning.

Keith shared his significant knowledge base of operational experience. We had several worthwhile side-conversations that added to the course content, and hit a number of key topics:

I also had the chance to do approach chart reviews and watch a TERPS tape.

After a long day in class, and still winding down from an intense work schedule, I headed back to the hotel about 5 miles away. I hadn’t gotten a weather update before I left class, but it was incredibly cold and grey outside. Local folks still expected major weather to hit us here, and I was fairly certain that all the airports (and my wife) were going to get slammed. The logistics and risks of this trip were all still in front of me.

Dinner at Applebee’s was surprisingly good. I came back to the room and opened the books while I listened to storm updates. I called it an early night, but wasn’t able to sleep more than four hours the entire night.  I was concerned about my performance the next day, as a result, and would have preferred to be well-rested.