I noted on my last post that I was hoping to wrap up the paint project with the aileron replacement up at Dutchland Aero in Smoketown. Well – I believe we did it, but it took all day again and my butt was beat up in the end. I’ll need to do another test flight in smooth air, as I’ll explain, but the bulk of the drama is behind me.

The weather was clear when I arrived at Georgetown to pull the airplane out. I was hoping that the concrete replacement project (remember the hail storm?) mitigated the drainage problem that cause an icing problem – but alas – nothing is ever easy. 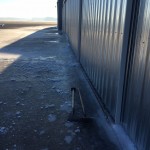 The airport management at Georgetown does good by me as a Hangar Tenant, just as Delaware Airpark (DRBA) Management did. I now have new metal doors and very much cleaned up area to go with the new concrete. The 6′ or so in front of my hangar stays shaded in winter though, and allows an almost impassable ice sheet to stay as long as the weather is freezing. Makes it difficult and dangerous to move the airplane over this to get to dry ramp. For today, I found plywood sheets to lay across the ice, and used my power tow to pull the airplane straight out.

Getting back in would be trickier, so before I fired up, I stopped to talk with Jim H. – the airport manager. I let him know I’d be back to the airport just after lunch, and wondered he could have his guys stop and do something with the ice. He said he would talk with them, so I hustled back to get the show on the road. If they did anything at all, it’d be a plus. If not – I’d figure something out.

Both engines started on the very first turn, and I let them warm up for a good 10 minutes. I enjoy sitting in the airplane early in the morning, and this was a good time to take stock of what lay ahead. All warmed up – I departed runway 4 in light winds, climbing up to 3000′ to pick up an IFR clearance from Dover.

Other than mistakingly using the call sign Piedmont when communicating with ATC, the flight up was smooth with only one notably exception. I was seeing increasing headwinds approaching 40 knots by the time I crossed into Pennsylvania, so it took me longer than I expected. After a nice crosswind landing to runway 28, we got to work.

The aileron swap was done immediately and a first flight performed with a neutral trim tab. The plan was to see where we were, and adjust the yoke position to normal while getting the airplane flying fast and true.

I won’t bore you with the details of each flight, but I will tell you I did four of them in the Lancaster area, and one final longer flight home. On each successive flight, the wind kicked up further in both speed and gusts. Turbulence that you’d normally expected here with northwest winds were increasingly present.

Landing RW28 was getting spirited!! I had to keep the speed up to compensate for gusts, without getting so fast as to jeopardize a landing on this 2400′ strip. I had to target each landing on the threshold – close to a public roadway with an approach path over trees and obstacles that caused downdrafts down low. I was working hard on every landing – and some of them looked like crashes from the ground (all smooth touchdowns at the end of a few seconds drama).

The airplane flew better each time, but before the last flight I had to admit that the continued turbulence and landings were wearing me out. I think the mechanics were also getting tired, so we made this the final adjustment for the day, and felt good that we were very close. 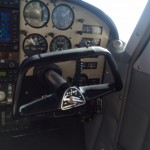 At this point we did the final adjustments, and I filed from the ground and headed home. The wind was not as much of a factor once I was outbound, but the turbulence just kicked my butt all the way home. The very good news is the airplane appeared to fly straight and true. I can’t be 100% sure just yet, but it sure seemed so. The moderate turbulence made it too difficult to be certain of perfect balance, but I have faith we are there.

As you can see in the picture at left – the one last adjustment that needs to be made is a resetting of the yoke position to neutral. I’m having that done this week by my GED mechanic, and Dutchland agreed to pay for that work. Very cool and more than fair.

It has been a long road, but this is highly skilled work that requires patience and understanding. Good thing I have Dash-8s to fly in the meantime anyway!