I had promised an update on the broken tail lens issue that led me to replace a working strobe light system with a new Whelen replacement. You can see the original post here. I found help in guidance in two reliable mechanic shops I know, and relied on the International Comanche Society forum for additional guidance.  Finally – I visited a salvage yard for airplanes to try to find an exact match, to no avail. 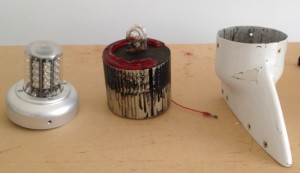 Components of the Tail Beacon

The whelen beacon on the left is described in the Installation Sheet with part numbers and TSO information. It is P/N 01-0771080-55  and model # 71018055.  The strobe in the middle of this picture with the broken lens atop is a Hoskins unit 701620-1. The fairing is at right with the opening that works for both parts.

From the ICS site, Pat warns that the new unit might produce a moat and collect water. I couldn’t evaluate how bad that would be until the new unit came in, but when it did, I could see she was correct.

You can see that she was correct in the picture at right. There clearly is a ridge that will collect water if the aircraft is sitting on the ramp. The concerns then are ice and snow working down into the opening and cracking the fairing, and a larger amount of water collecting and draining down into the vertical tail.

Looking at the old unit, you can see that this unit that has been in the tail for almost 50 years, also had channels that would permit water to drain down – though not as obvious and not as much of a problem. 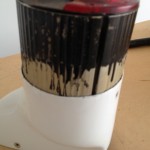 With the power unit pulled up a bit, you can see the ridges that would allow some water to get through. Knowing this helped to me to decide that running a bead of silicon along the ridge line of the moat shown earlier will seal the unit to the fairing.

The silicon fix will allow some water to collect on the new unit, but I don’t expect any issues from this. I grabbed my soldering gun, some heat shrink tubing, new #6 screws (and the right #2 screw driver), and completed the replacement.

The issue is resolved at this point, and the unit is incredibly bright, as expected. To wrap this up, here are my list of resources:

– Salvage yard: found one very near my home in Smyrna, De.  They had a clear but cracked lens that would have fit for $20.  I opted not to do that, since this tail beacon had to  be RED, and I’m not a fan of installing broken parts.

– Whelen cross reference lists and Original Parts Manuals – the numbers I came up with gave me multiple options that didn’t lead to success with uniquely identifying which options would work.

– Calling Whelen directly:  that worked. Their staff was knowledgeable and gave me the right answer

– ICS: Fellow pilots gave me pictures and accurate information. I took a chance and relied on this information to pull the trigger.

– My mechanics. I sought out advice from two local shops and they were both very helpful.

All these insights, taken together, got me going again.  Just waiting now for my annual to get done so I can take the airplane on a vacation Florida and then to Oshkosh.